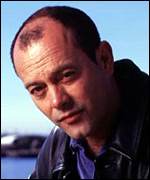 ...that there were only a finite number of faces. This has been really getting to me. For instance, I spent the last two days sitting between these men. Actually the one on the left was on my right and vice versa.

Everyone I see now reminds me of someone else. It is becoming a little offputting.

There has been lots going on chezbyrnesoontobewhittaker. I have been catching up a little bit on my studying which is good. And the secret knitting project is going ok although it is going to be a bit tight to finish it in time. And I have decided it is going to be cold on 2nd aug so I need to knit a shrug. I've found one in lace style though, which i bought after talking to justine about it. Justine, incidentally, will be appearing on a podcast near you any day now. I'm planning to put out another episode this weekend.

Work this week has been quite appallingly awful. It is starting to get me down somewhat, but not enough to actually do anything about it. We'll see what happens when the meds get cut i guess.

I've just thought - the yarn for the shrug means I have to break my yarn diet. Hmmmm, so if I'm going to anyway then....no. Slippery slope.
Posted by littlelixie at 5:31 pm 2 comments: Links to this post

Really rather a weird week in italy. It rained a lot and Pooch and I discovered a number of humorous differences in our attitudes to things, such as sitting around reading or shooting the breeze. The train ride there was odd with our own little cabin on the sleeper fromparis to milan. We arrived in the morning very tired and so the first day was a bit of a daze, especially as it was pouring with rain for most of it.

There were some good bits though with scenes like this around most corners.

The ride back was during the day and equally tiring. We had a weird afternoon in milan first and I slept really badly that night so was already tired before next door decided to have their loudest party yet last night, so today I've been walking around in a daze. Combine that with finding I have gained another 4 pounds and am now at my most heaviest ever and having my first assignment due for the MBA and being behind with my studying and I'm not in the best of moods.

I did do some holiday knitting using the knit 1 crochet too cotton I bought in new york. I am rather pleased with it.

Close up of colour change and basketweave front.

It would have been a pic of it in situ but I find images of myself physically revolting as I am now a full 3 stone heavier than I was before I went mad 3.5 years ago.
There was no stash enhancement at all (stashalongstashalongstashalong) but I did pick up these in milan.

Pooch is his usual self, sitting next to me reading about italian cookery. I took about 10 pictures of him sitting in chairs during the week but this first one remains my favourite. In the first class lounge in paris before boarding the sleeper to milan.

Posted by littlelixie at 7:00 pm 4 comments: Links to this post