I am back and almost not entirely caught up with what I've missed since I left on Wednesday. Who would have thought moving continent with no idea of where you'll be after 14th January would be so time consuming? My inbox resounds with the ping of those wanting to buy our secondhand rice cooker and take away our ironing board and meanwhile I still haven't managed to put SkipNorth on sale. So much to do...

It wasn't really the best time to go away but I had booked it some months ago and I may not be back in this part of the world for some years so I decided to head off. Seoul is quite similar to Tokyo in many ways but, to my eye, not as attractive. 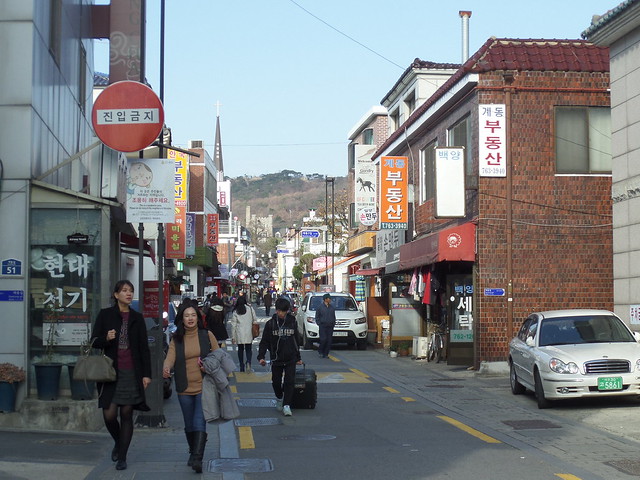 It's also not as high rise, a lot smaller, plus it sits in a kind of valley with lots of impressive mountains in the distance. 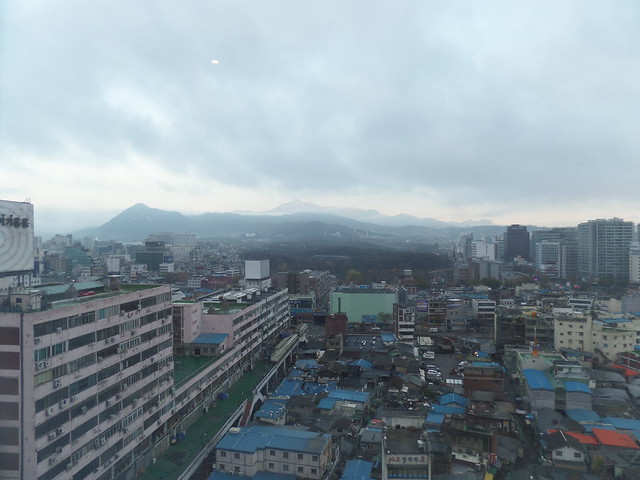 On the attractiveness front, one can't really help thinking that it would have been nicer looking had they not been brutally invaded by the Japanese quite recently and invaded/burned/bombed to pieces on a fairly regular basis throughout history. There are still pockets though. Bukchon Hanok Village was about five mins walk from my initial hostel and was my first port of call. 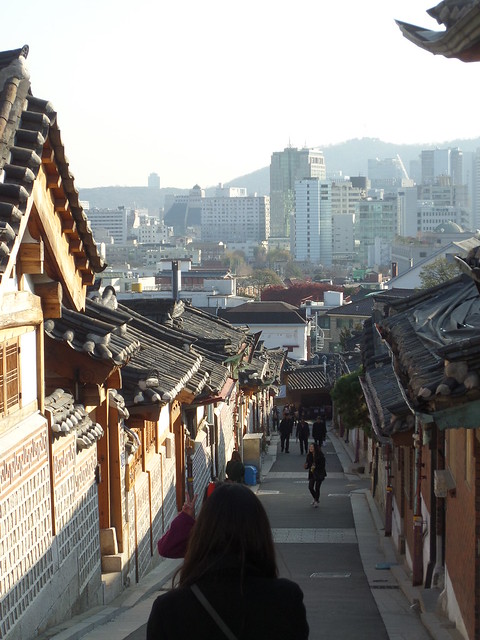 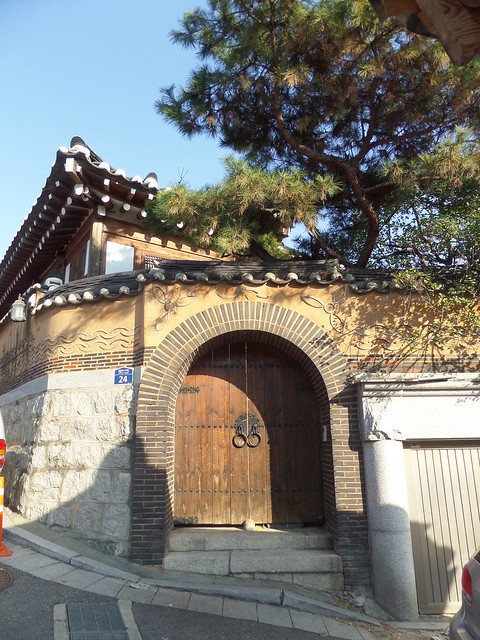 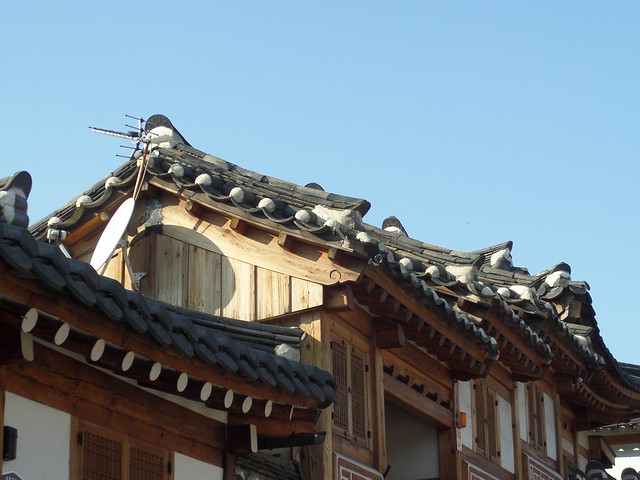 I really liked the roofs and all the textures on the walls. 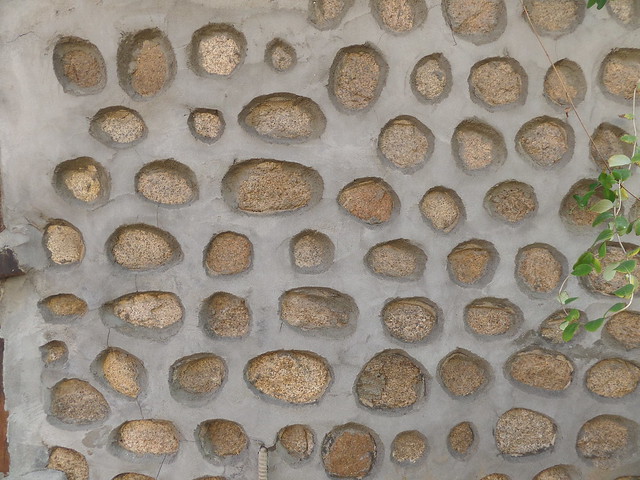 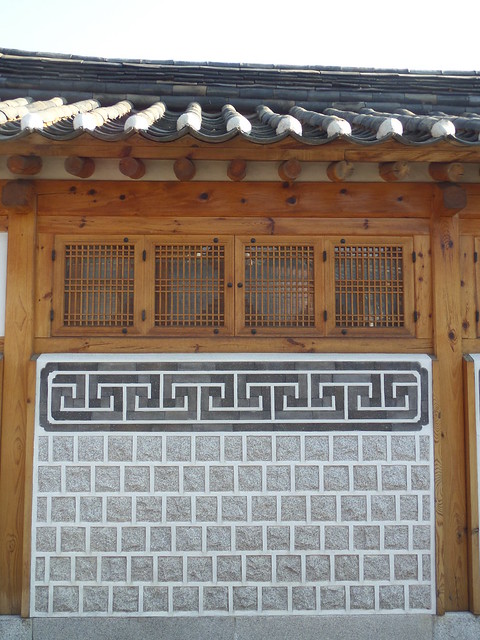 And some of the door trims were very beautiful. 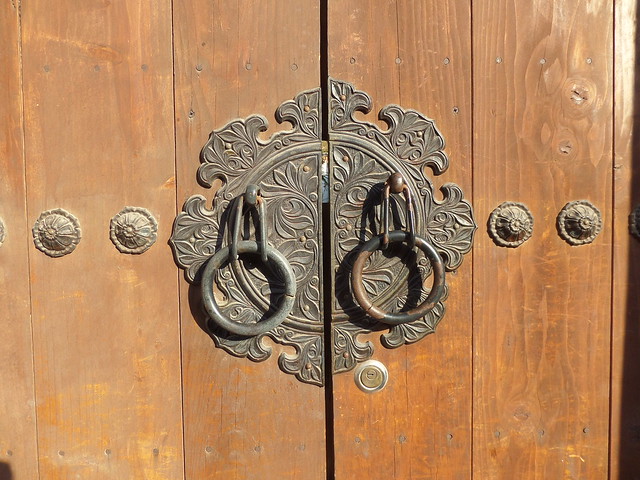 I had heard about the Markets in Seoul before I left and headed first to Namdaemun which sold...everything? 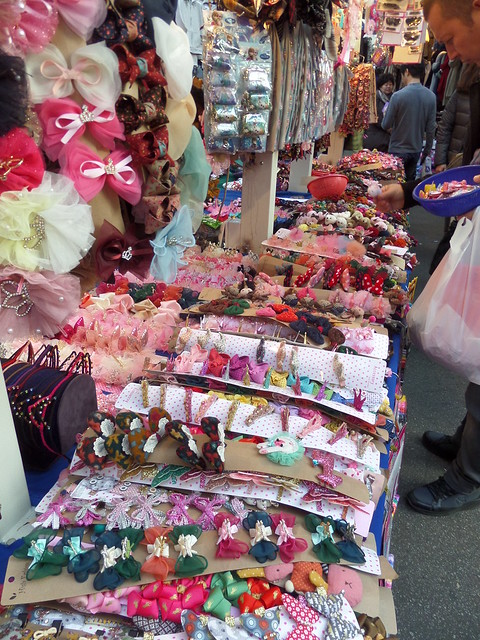 There were stalls for seemingly everything clothing/footwear/household related and the market was vast. Look for the vanishing point in the photo below. And that is just one street in a vast rambling whole. 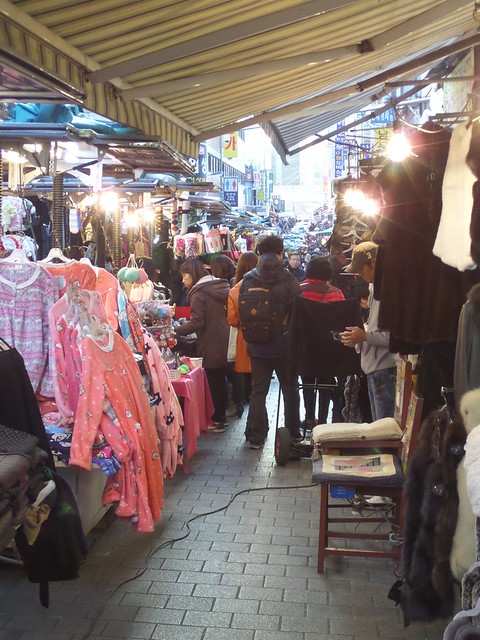 It really was massive. And quite seasonal. 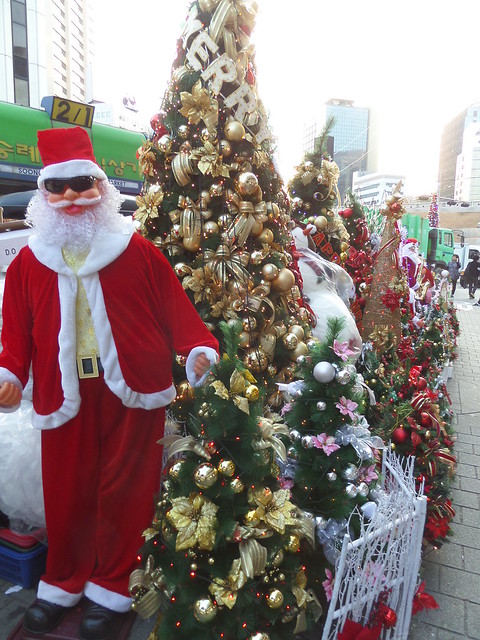 The other shopping areas tended to have multiple shops all for the same things. In one instance there were three shops in a row all selling only face masks - seriously - whilst I found myself strolling through camera village. 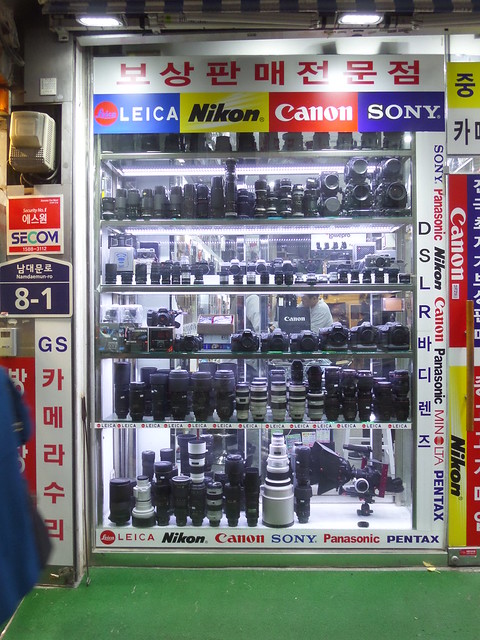 Then I found what I wanted - a texting Garfield. 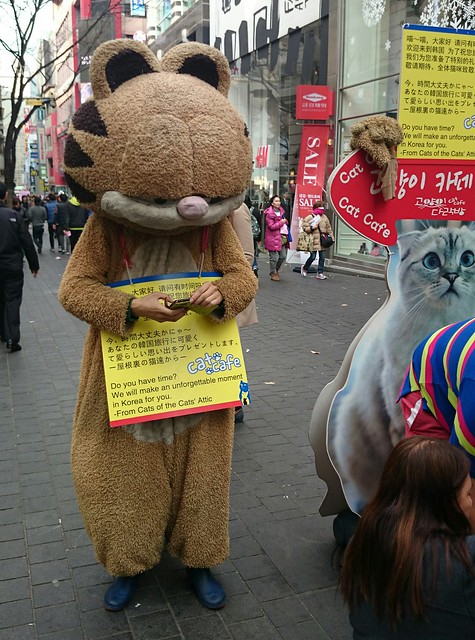 This was the sign that the cat cafe was near - yay! 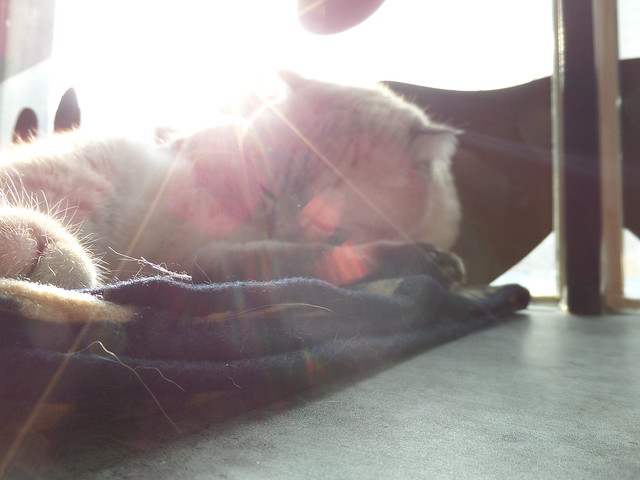 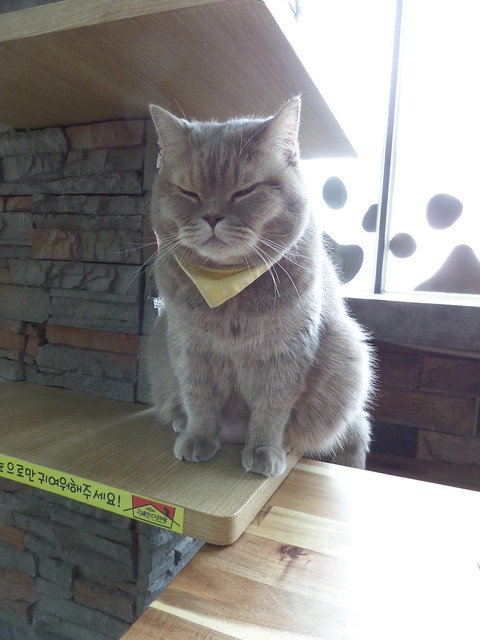 This one just adored the male owner and followed him everywhere when she wasn't sat on his shoulder. 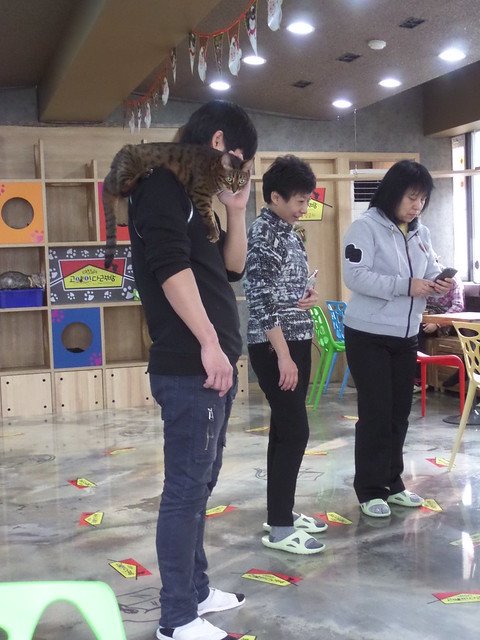 They were all very sweet. 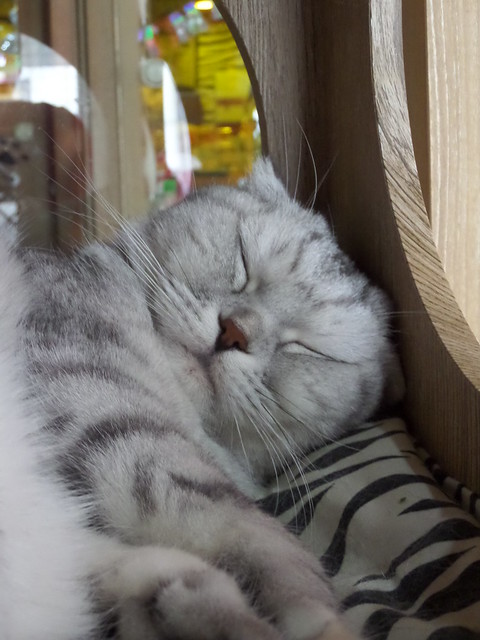 And the place was nice too. 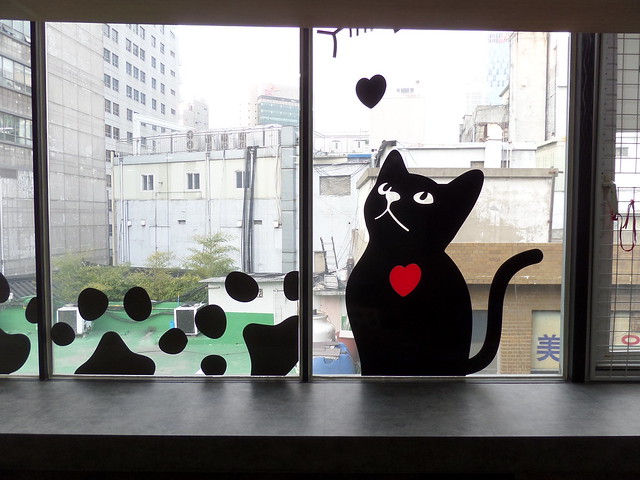 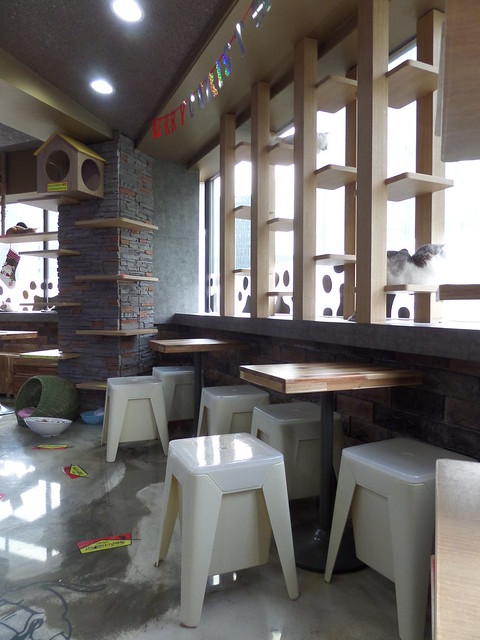 I haven't been to Japan, but I've been to Seoul. For this farm girl who lives outside a town of 900, Seoul with its 10,000,000 people was overwhelming!! All the high rise buildings, people moving everywhere and no grass! The museums were amazing and we got to see/learn so much! I am used to views that only include the outbuildings on our farm...and fields! The writing on the streets was amazing too! I've never seen all the pavement in the whole block be taken up by writing like I did there. Enjoyed my time there and would certainly be willing to go explore more of the Republic of Korea!!