It's not something any crafter likes to have occur to them, but I have been wondering if I have too many different projects on the go. Lots of knitting projects - yes. Lots of sewing projects - yes. But lots of projects, each one for a different craft - no. My brain is trying to think of too many things at once. The tipping point seems to have been casting on the Hourglass Sweater from Last Minute Knitted Gifts. I made this before when I was heavier and wore it a lot but gave the too large jumper away when we moved to Japan.

I bought some RichMore Percent Gradation from Yuzawaya this week having got bored of wearing the three warm jumpers I have here in rotation non-stop for the last two months. I remain optimistic about the unexpectedly stripy effect working out for the best, despite the evidence so far. This was begun on top of the latest EPP project I've started - making the base of a new bag. 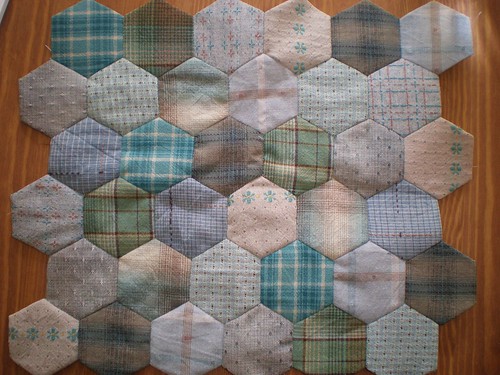 This uses the bundle of Japanese cottons I bought at the Quilt Show last month which looked blue together but which are definitely more green when pieced like this. I do adore this type of fabric which doesn't seem to have a name in Japan. The cotton is thicker than quilting cotton with a slightly brushed effect which makes it feel very soft. The patterns are woven rather than printed which also increases the bulk where there is a feature such as a flower (top row, 3rd from the right) or a dot (second row, 1st on the left). These features also give it a lovely texture and the colours are all very dusty and muted. Beautiful. I have also been hand sewing the roof of the little 'house' sewing box I also got at the quilt show. I've been using printed Japanese cottons for this. These have the same kind of weave as the above ones but tend to be darker and with a pattern printed rather than woven in. I picked up this sample pack at Okadaya. I have a chimney ready to go and am going to hand quilt some roof tiles before adding some binding. Then I have been decoding the back of this.

I had done quite well using this page of common sewing terms but then had to get Pooch to help with the last few. The sizing is quite impressive - for people from 48cm tall to 180cm. Japanese patterns tend to go on height rather than 'size 14' or 'Medium' which makes sense really. It is certainly handy when it comes to baby clothes since my 9 month old niece now wears a 12-18 month size. So that means my mind is also full of sewing clothes. I plan a sample dark blue cotton jacket with added sashiko stitching. I've always wanted one like that since first discovering sashiko embroidery a few years ago. Then lastly I finally found a decent sized polystyrene ball so can set about trying my first Kimekomi Ball.

They are kind of fabric temari balls - something Knitting on the Green taught me to make many moons ago. But instead of effectively embroidering the ball you make cuts in it, using the same measuring technique as with temari, and then wrap the fabric around it, pushing it into the cuts to hold it. So my mind is also full of those.

As a break from all this self-imposed craft pressure I took myself off to the beloved cat café yesterday. The cats were all extremely mellow - I think it was the sunshine after the snow. This lady, called Yuzu, in particular was loving the sun patch she found herself in.

She only woke up when her sister Anzu came over and started cleaning her before doing the same to herself. They are both a breed called Ocicat which are spotted like wildcats despite having completely domesticated cat DNA. They are very beautiful.

Her waking up meant she was in time to see this guy...

...wake up and take it into his head to have a chew on the folder he'd been sleeping on. He is called Nats and is an Abyssinian. They are quite wiry with very short but very soft and silky fur. Nats and his sister Coco are usually to be found playing with the toys and cantering down the room before doing a death defying leap from one ceiling height perch to another so it was quite unusual to see Nats so docile. Two others deserve special mention. Ramu is a very beautiful Ragamuffin cat - they tend to go limp when picked up and are quite big and very soft and fluffy.

Ramu likes being up high so she was on top of the cat tower and every now and again a whole leg or her tail would drop down through the hole.

Very cutely she was thrilled when another visitor started playing with her with the rope you can see above. This breed is known for being quite playful but also quite lazy so she rolled around on the platform while the rope appeared first on one side and then the other. She didn't seem bothered about catching it, she was just enjoying keeping track of where it was. Very sweet. The other I spotted when I was just leaving. This is Lili who is a Ragdoll - very similar to the Ragamuffin but not quite as fluffy.

When I first caught sight of her I thought with horror that her face had swollen up but on closer inspection she's cradling her face with her paw! I've never seen a cat do this before and the staff were really amazed by it too and immediately started taking pictures for the website. She seemed very comfortable and didn't move it when she woke up amongst all the attention. So all in all it was a very mellow and happy visit! And now, back to the...what? Knitting? Sewing? Ah...supermarket run!

Posted by littlelixie at 1:20 am 3 comments: Links to this post

Last night's Stitch n Bitch (on meetup.com should you ever happen to be local) was near Omotesando which happens to be near Kiddyland. I had heard that there was a toy shop aimed at adults rather than children and decided to pay it a call. I had no idea what to expect plus I only had half an hour but it was 30 minutes well spent. My eye was immediately caught by a sign to Snoopy Town in the basement. I am a keen devotee of Snoopy but in a kind of casual way. The basement of Kiddyland is enough to make me think I've been wasting my life. So. Much. Snoopy. Oh wowsers, it was Snoopy heaven. I was ridiculously restrained and simply bought a patch for the bag I started decorating before xmas. The physics geek in me cannot resist when two enthusiasms, such as Snoopy and space, combine. On the way back from SnB (which was awesome again) I read about Snoopy's involvement with Nasa - or possibly I mean Charles m Schultz's involvement with them. From Wikipedia "Following the Apollo I fire, Snoopy became the official mascot of aerospace safety, testing and the rebuilding of the Apollo Program, due to his refusal to accept defeat and his "'outside the doghouse' way of looking at things." " Mr Schultz reciprocated, including several space travel stories in his Snoopy strips. I never knew that before. See how foreign travel expands the mind?!

Having so blissed out in the basement I had very little time to explore the other three floors but they were similarly kawaii (cute) and had all sorts of characters. Including the slice of salmon seemingly known as Kirimi.

Let me know if your life needs a slice of salmon pencil case to be complete and I'll send one on!
SnB has been too briefly glossed over. It really was good and for once I was not the new kid! I was able to tell two others about my favourite knitting shops and in return learnt about a village of Japanese farmhouses, an alternative to Craigslist for selling furniture when you leave and an idyllic island an easy train ride from Tokyo which has lots of galleries and art projects going on - Naoshima. Looks kind of nice huh? Just need to wait for this snow to clear up and for it to get a little bit warmer so I can paddle!

Posted by littlelixie at 12:49 am 2 comments: Links to this post