Making Up For No Making

I've already made more this week than I did in the whole of April. I had a sudden attack of makedness (which should be a word) and so I give you...a thing to stop the door slamming. 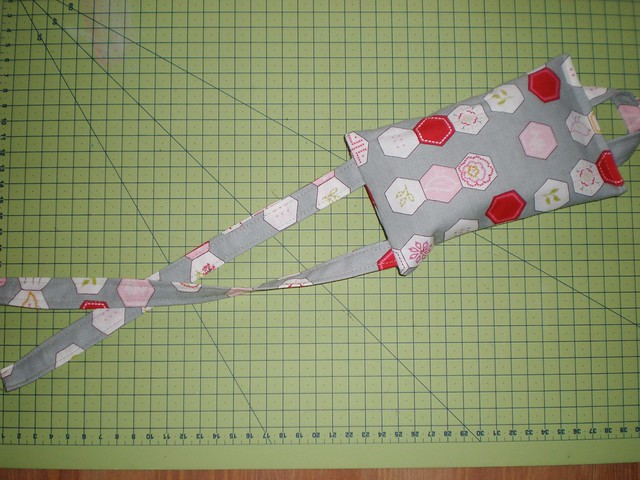 Primpted by necessity rather than aesthetic value but it does the job very nicely. There are some batting scraps folded up inside to simply stop the door going 'wham' or 'clickity click' when the breeze catches it. Action shot. 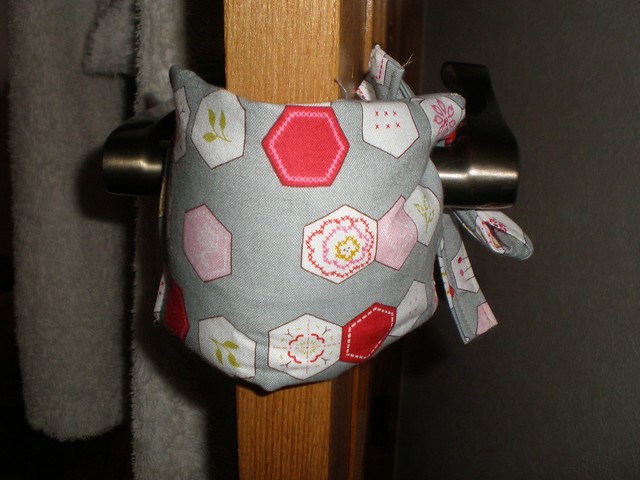 If you actually want to close the door you undo the ties and leave it hanging on the knob. Nice.

Then we have a sunglasses case. 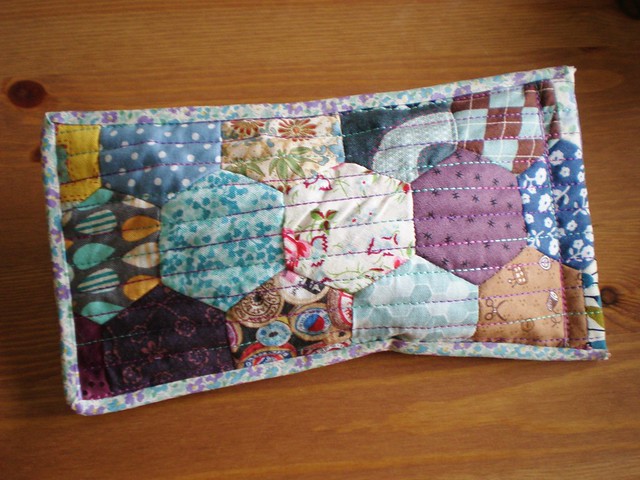 I handsewed the patchwork part of this last September, cut out the sandwich and glue basted it then never got any further. 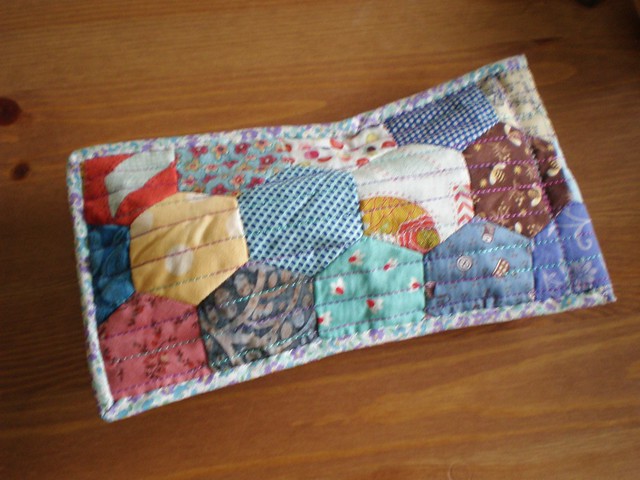 I brought the pieces with me to Japan and finally it appears. 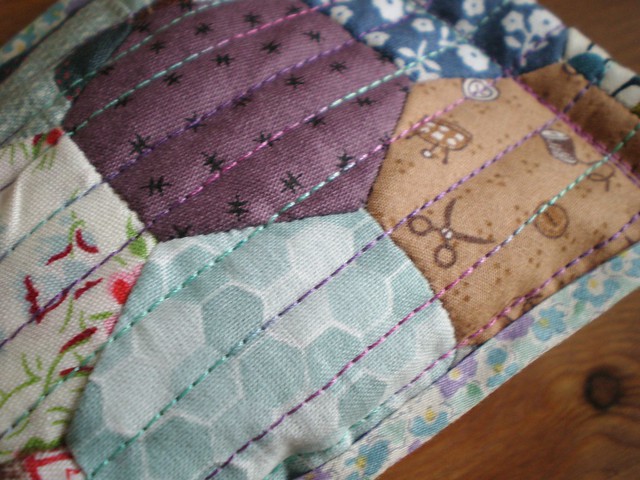 Straight line quilted since the machine I've been lent is very basic. The case has got one of those press-the-sides-together-and-the-rigid-pieces-bend-and-it-opens type closures.

This sewing machine cover was also whipped up this week. 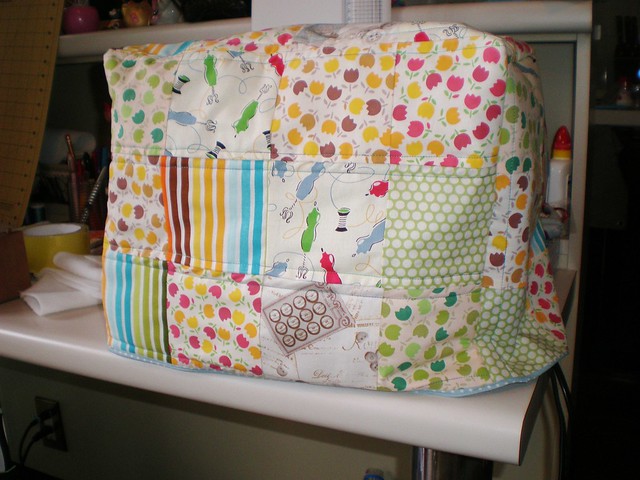 The tulip fabrics were from the 100Yen shop and the rest were from stash. We get a lot of dust here and three weeks away had let it build up on the machine so I thought the time was right to finally make one.

These makes were all quite practical but highly satisfactory to complete. I hope to have other attacks of makedness in the near future.

One of those "Oh God" days

My utter dick of an ex brother-in-law is being an even bigger dickhead than the last time he was a dickhead. As go between I get both his idiot selfishness and constant demands on top of his last set and my sister's anger and dismay at his utter dickishness.

And then, this morning, I went to the Calico Cat Cafe. Here (on youtube) is the music from the Hamlet Cigar advert (english people living in the 80's will get this, otherwise it's Air on the G String to the rest of you) to listen to while you look at the photos. 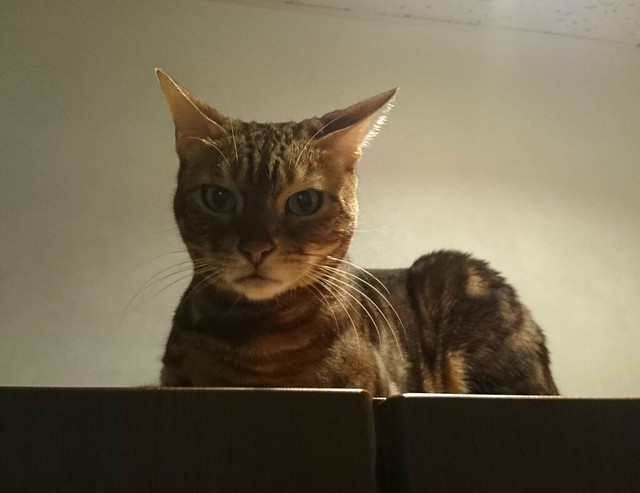 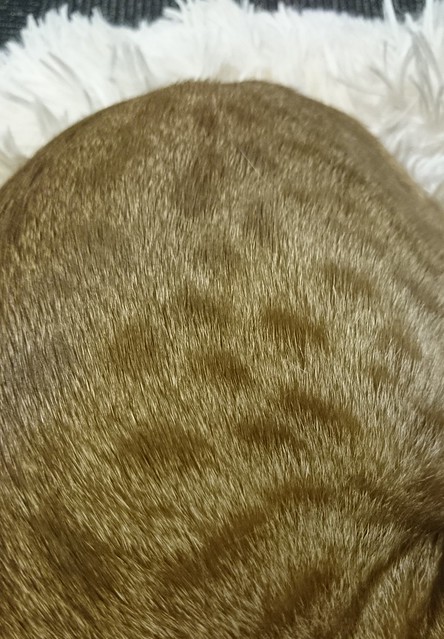 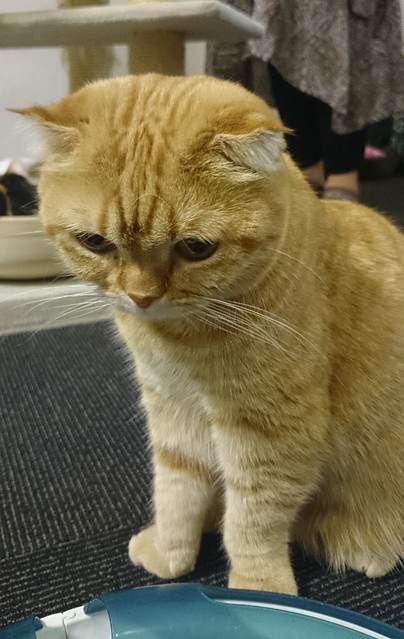 (She looks really sad but actually was having an awesome time with the toy. It's just her folded ears.) 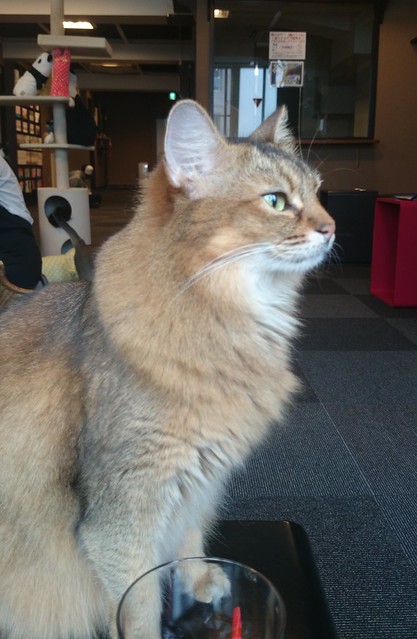 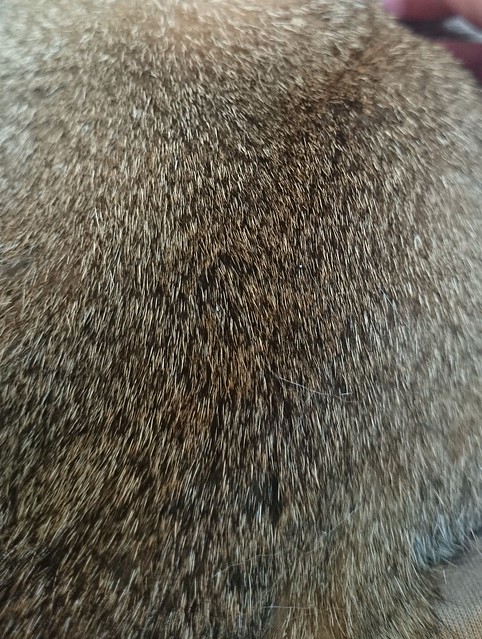 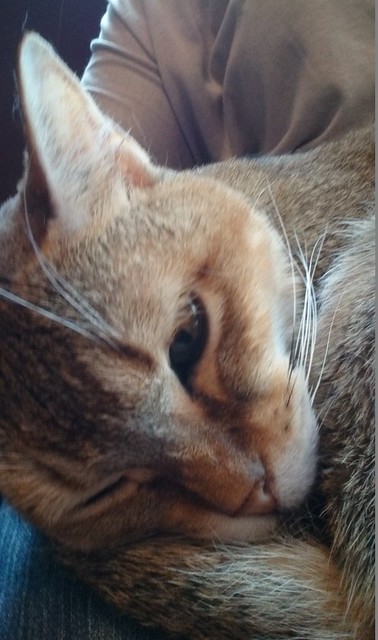 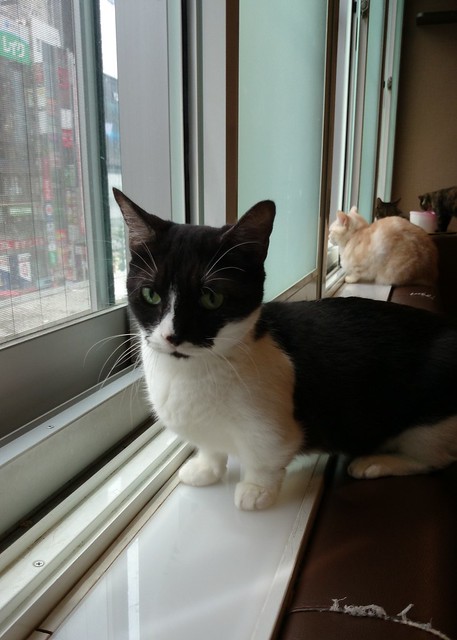 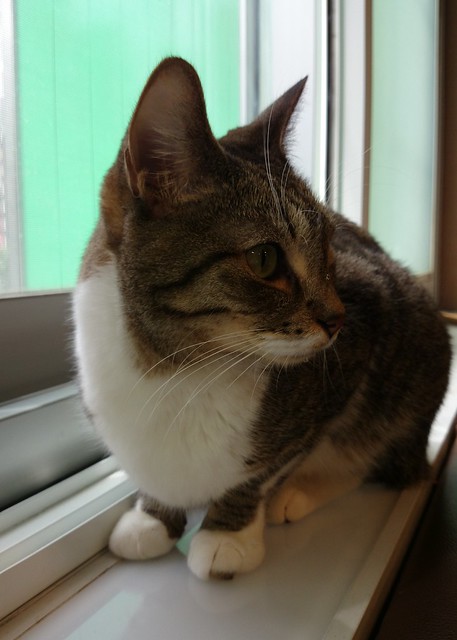 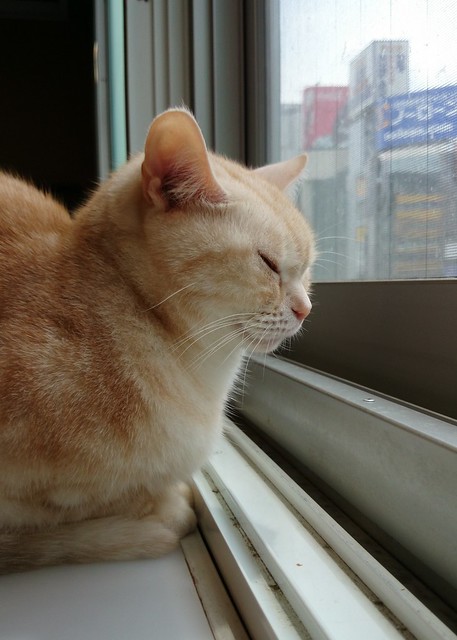 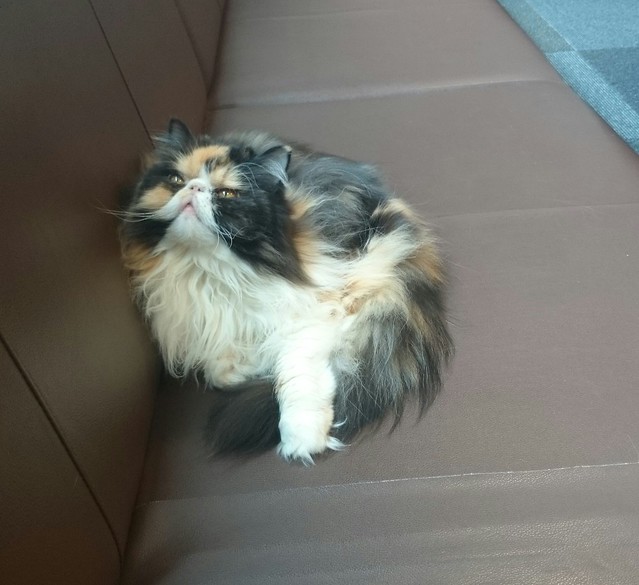 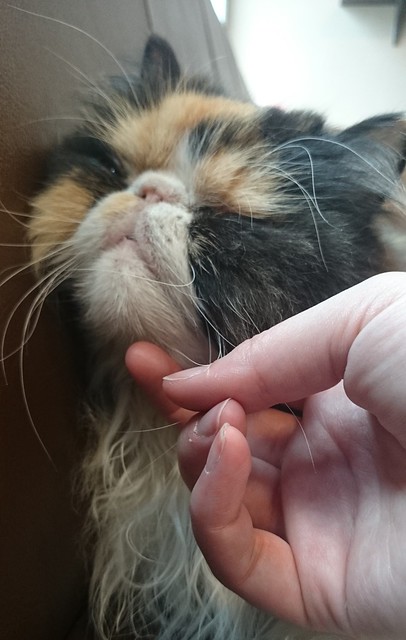 Hinata (above two photos) is one of my favourites. She has an awesome face but also blisses out in a kind of trance state if you tickle her chin.

In a never before seen or experienced moment, two cats were sitting on my lap at the same time. 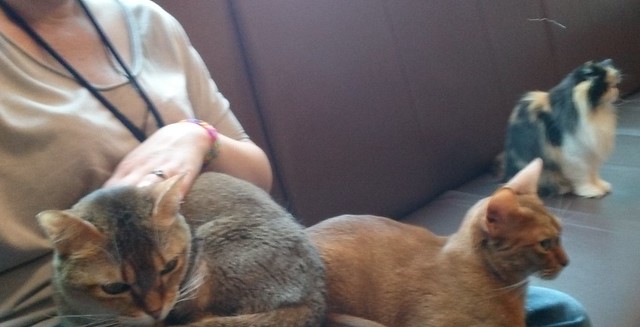 The golden orange one was first and wasn't too pleased about the munchkin cat (very short legs) getting on too but reluctantly decided there was room. Plus Hinata was hanging about getting occasional strokes, biding her time til I was free. Or so I tell myself.


Posted by Lixie at 8:58 am No comments: Links to this post

Not exactly one of my most prolific months, but then I've either been staring at cherry blossom or in the UK for most of it.

Before I went I finished my name tag for Susan which I really hope she got and which I blogged about here. While away I managed two things. The first was a pair of Rise and Shine socks using a free pattern available here (Ravelry Link). The pattern is staggeringly simple to remember, even for someone like me who has no memory, and it was very satisfying to reach the end of each repeat before heading back the other way. 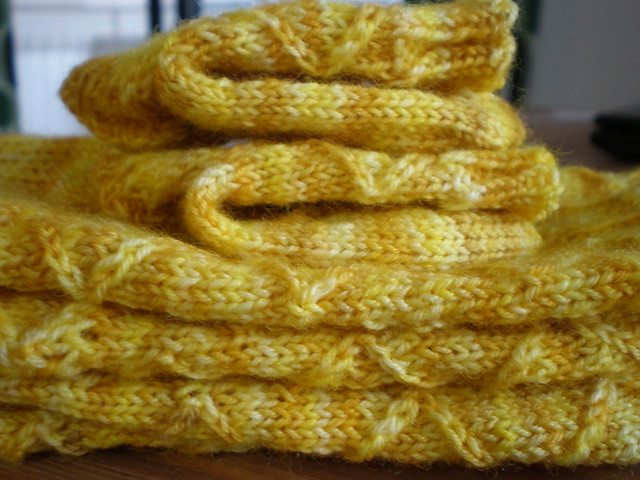 In fact I enjoyed it so much that having finished the main pair (for my sister) I had enough yarn left to do a baby pair for ickle Jasmine. Mother and baby socks - what every mother needs! 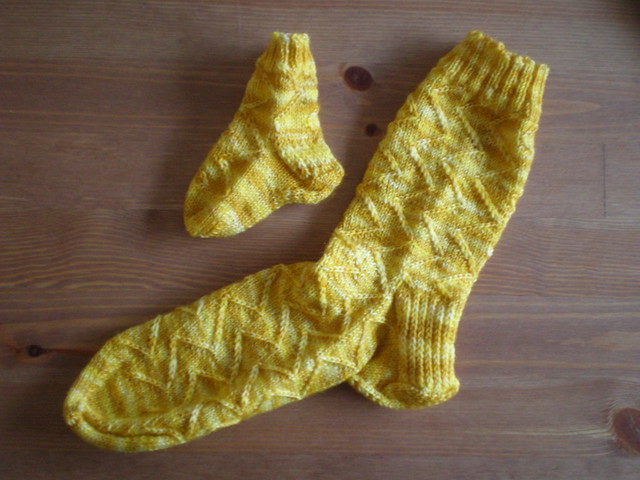 I also made a pin cushion for the EPP Early Summer Swap which needs to be sent by Monday. Must get on with that. 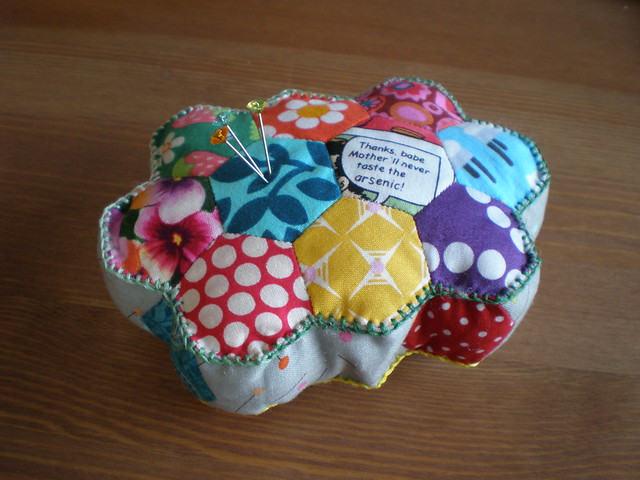 It has come out a little pouf-ier than desired as my stuffing was extremely springy. I incorporated some left over hexagons into the sides and then did a little blanket stitch to define the top and bottom. 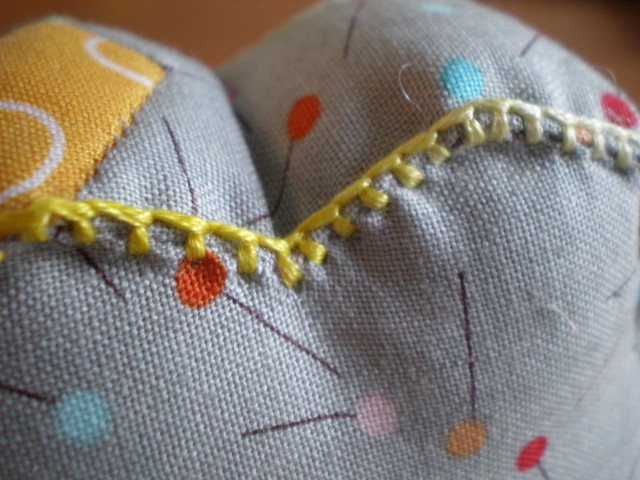 I do adore variegated thread so used yellow for the bottom and green for the top. I am really happy with it so will be sending it off to the recipient toot sweet.

This was my outing for today. I'm still a bit dozy from jetlag but I managed to unglue myself from bed for the 90 minute journey across to the other side of Tokyo Bay for this. It is an annual event and there are other flea markets so why did I bother going so far? It was the size that drew me. This is just one part of one hall. 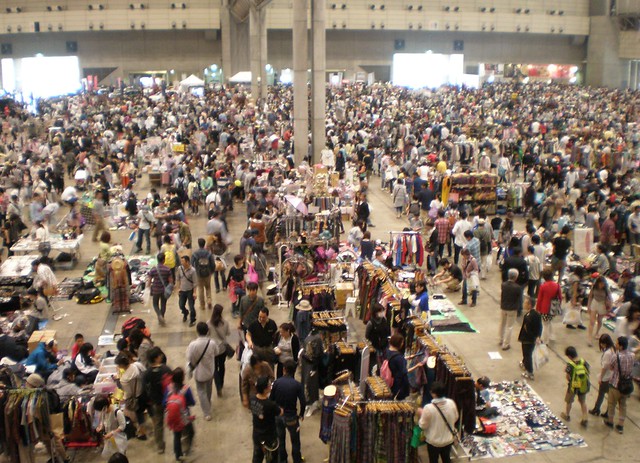 There were three halls. You do the maths. Except don't - apparently there are 1500 stall holders and they got 6500+ visitors yesterday. Yowsers. Plus it's on over 3 or 4 days. That is a lot of stuff. The middle hall (shown above) was people without cars and handmade things. The halls either side, which were the same size, were more like a british indoor boot fair where people had rocked up with their junk in their car's trunk and were hawking it to anyone who went past. For instance, this person was selling replica guns and chinaware. 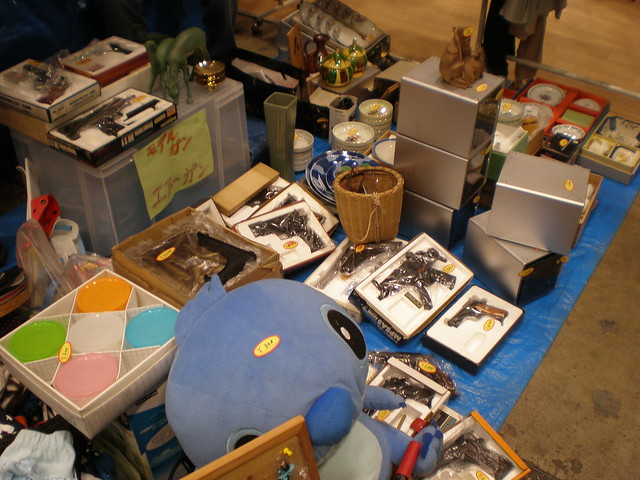 There was a bit mixture in the car section between people genuinely having a clear out and those who were traders and had brought stock with them. In the floor section the majority were having a clear out but there was also quite a lot of brought in stuff like toys. Some were new, some were vintage, and some were... 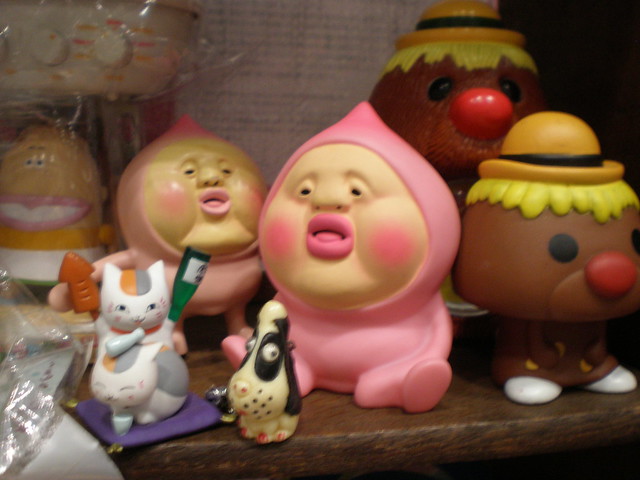 ...indescribable. But if you wanted an adult size Darth Vader costume with flashing light panels you were in the right place. 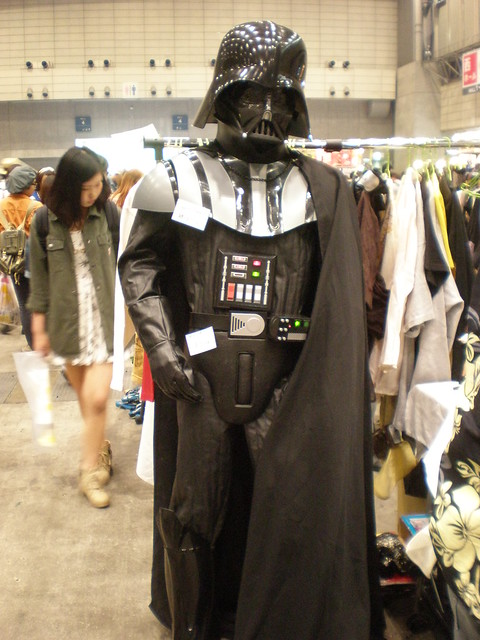 The 'handmade' section was quite interesting as a fair chunk of it was what i think of as "sticking stuff on other stuff" craft. The actual name begins with a D...what is it now...Decoden. Nice explanation here. It is really quite astonishing what some people will attach tiny plastic food pieces to. 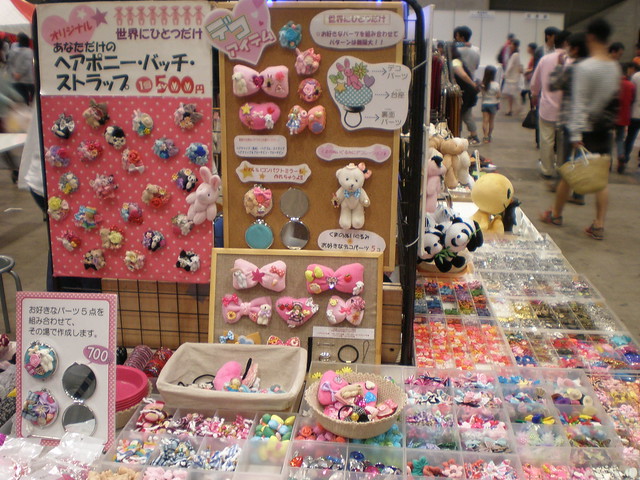 There were also a fair number of sticker stands - this is clearly where those cool dudes at the airport get all their suitcase stickers from. 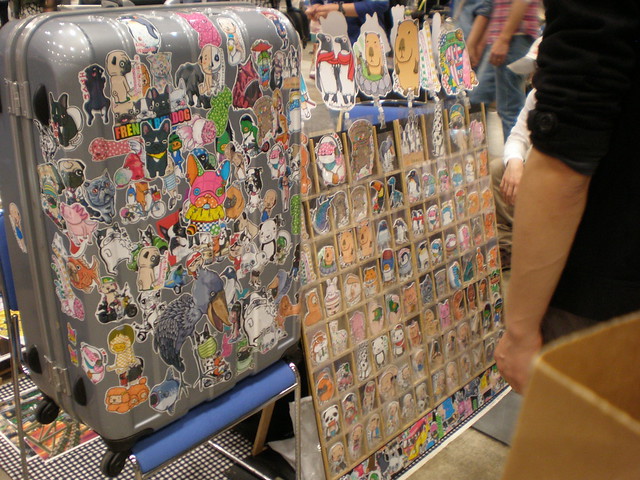 Not everyone was as interested in what was going on as I was. This guy seemed particularly non-plussed. 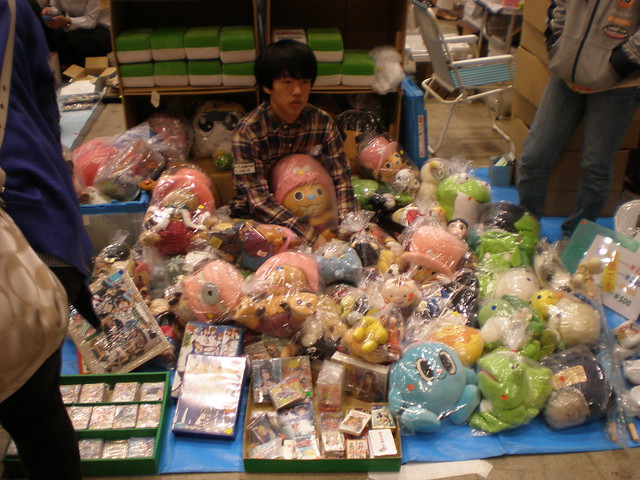 While this little'un was seriously happy about his motley collection of new toys. 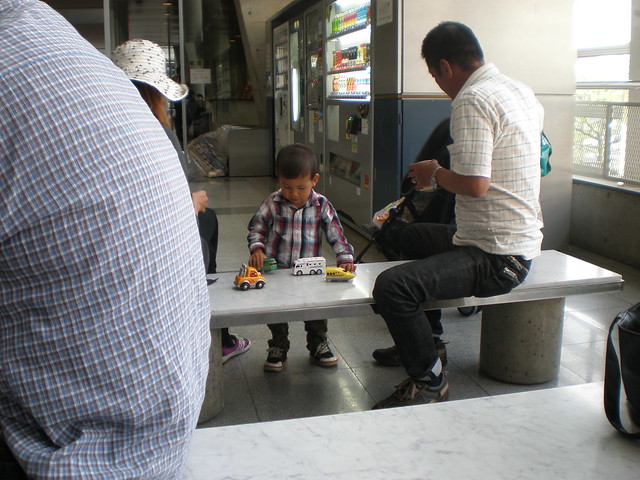 I should probably stop taking pictures of other people's children though.

Overall it was really interesting and I picked up a few handmade tulips, some traditional-to-somewhere doughnuts and also doubled the size of my basket collection by buying another one. If you happen to be in the area at the right time of year it is well worth a visit although be prepared for massive crowds and the crying children that inevitably go hand in hand with this kind of event.

Posted by littlelixie at 9:43 am No comments: Links to this post