It has been a good week on the sewing machine. Yesterday I finished this i-spy blanket for my ickle niece. 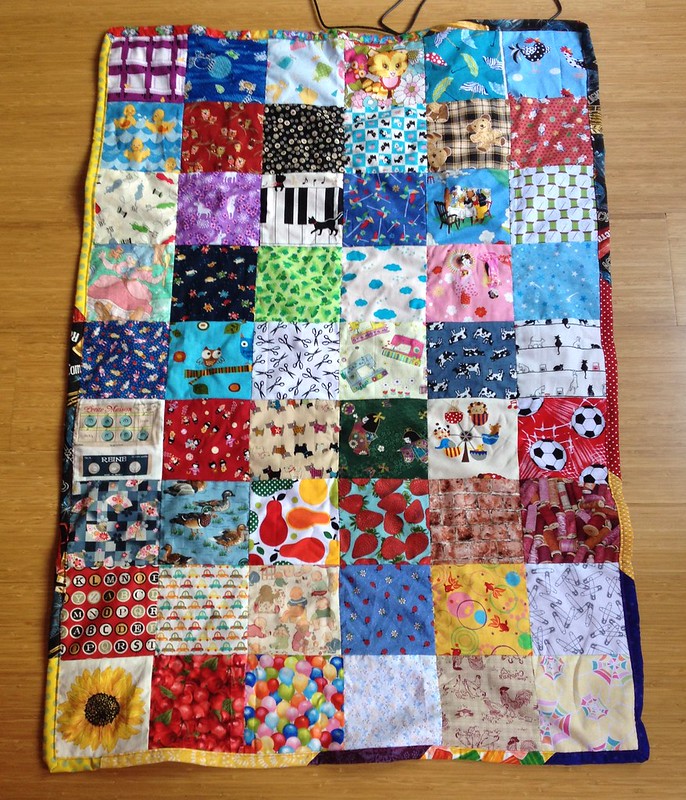 The back is the very soft minky fabric I got from fabrics.com with the stars embossed in it. It should be good for cuddling when she's poorly and hopefully she'll enjoy looking at all the different pictures and making up stories about them.

I also finished the top of my latest decorative mat - this one for the chest of drawers in the bedroom.

It needs sandwiching and quilting of course but at least this bit is finished. Those y-seams! I will not be rushing to do that again.

Then my ongoing sewing has been on the blue EPP quilt for my Mum. 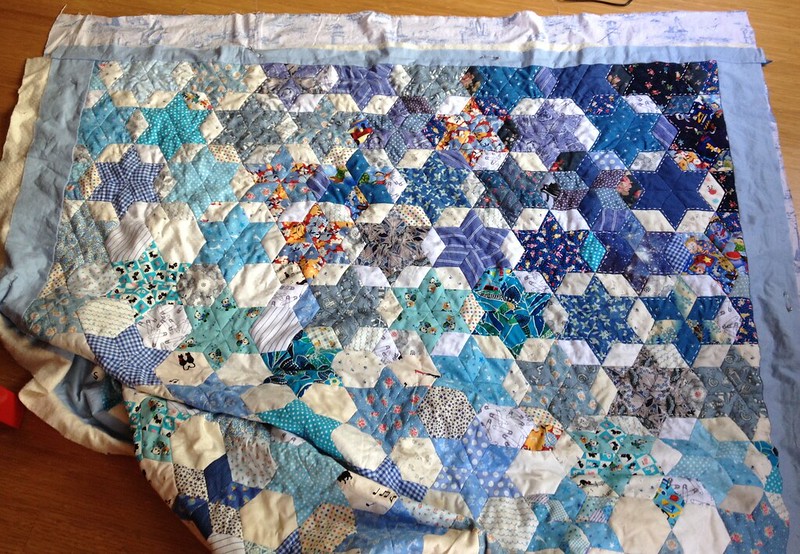 I've drawn a line to show how far I have got with the hand quilting. 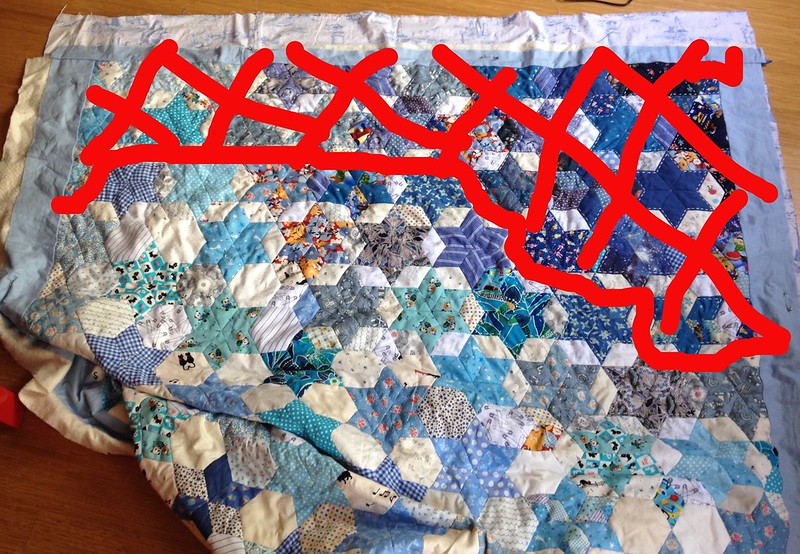 Clearly I've got a loooong way to go - but I can only do it every other day because it makes my finger tips hurt. Ah! How we suffer for our craft!


Posted by littlelixie at 12:00 am No comments: Links to this post

From their website...
"Renegade Craft Fair is the world’s pre-eminent series of events showcasing the best and brightest talents from the modern Maker community. It’s a weekend-long celebration of DIY culture; a thoughtfully curated marketplace where shoppers and micro-entrepreneurs make meaningful connections. RCF was the first event of its kind when it was founded in 2003, creating a platform for the underground DIY community to stake a place in the design market on their own terms. 12 years later in 2015, RCF is still the largest and most far-reaching indie-craft fair out there, attracting over 325,000 attendees across 22 events in 8 cities. We currently produce Fairs in Chicago, IL; New York, NY; San Francisco, CA; Los Angeles, CA; Austin, TX; Portland, OR; Seattle, WA; and London, UK"

Well this one was certainly quite a size. I thought this building. part of the SF Marina, held the whole thing. 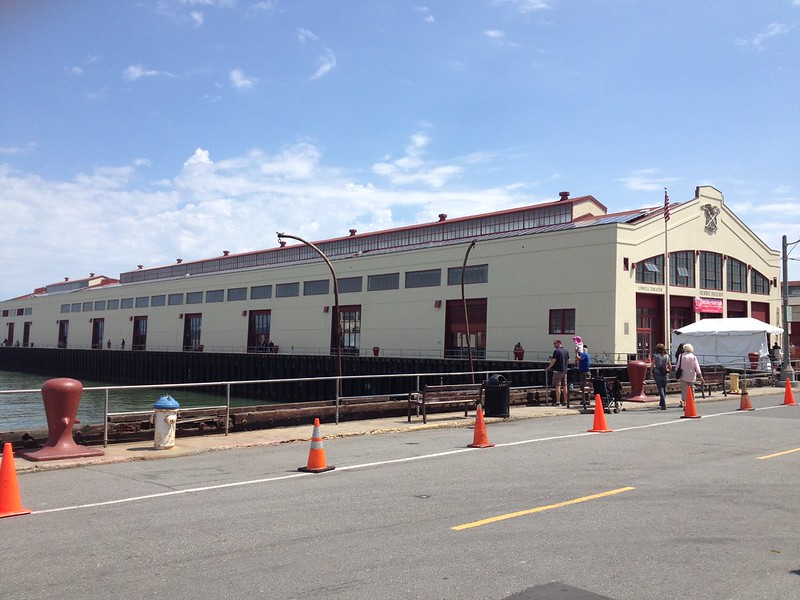 But it turned out it was in both buildings... 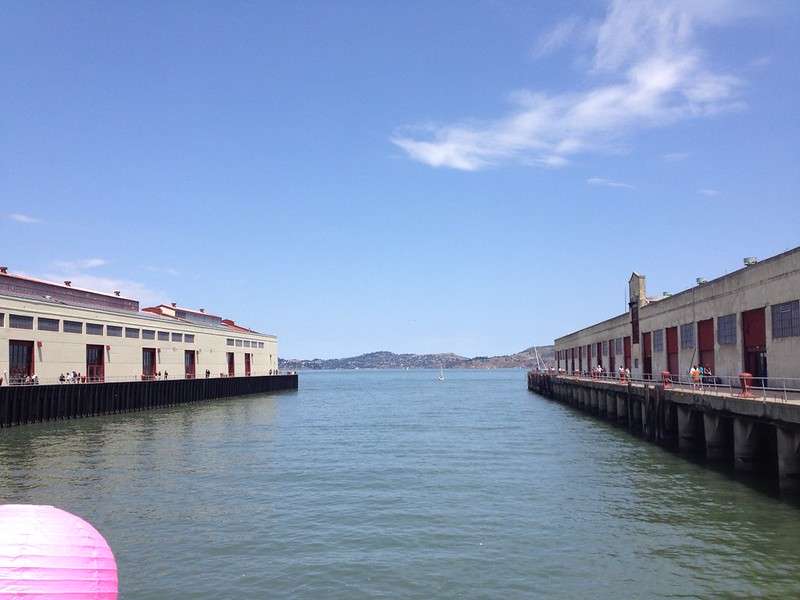 ...with just a little bit of coast in between. As you can see it was an amazing day, with Alcatraz looking rather pretty in the distance. 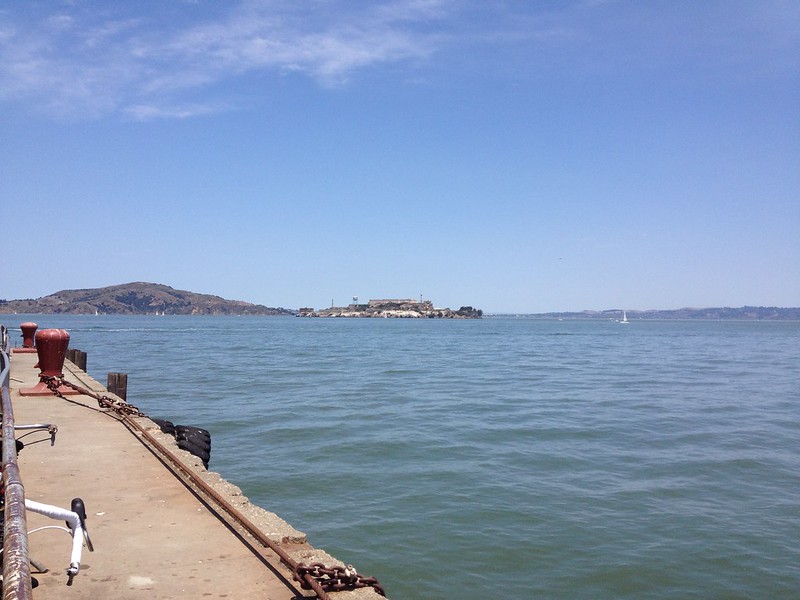 Inside it was busy but not too crowded so there was plenty of room to move about. 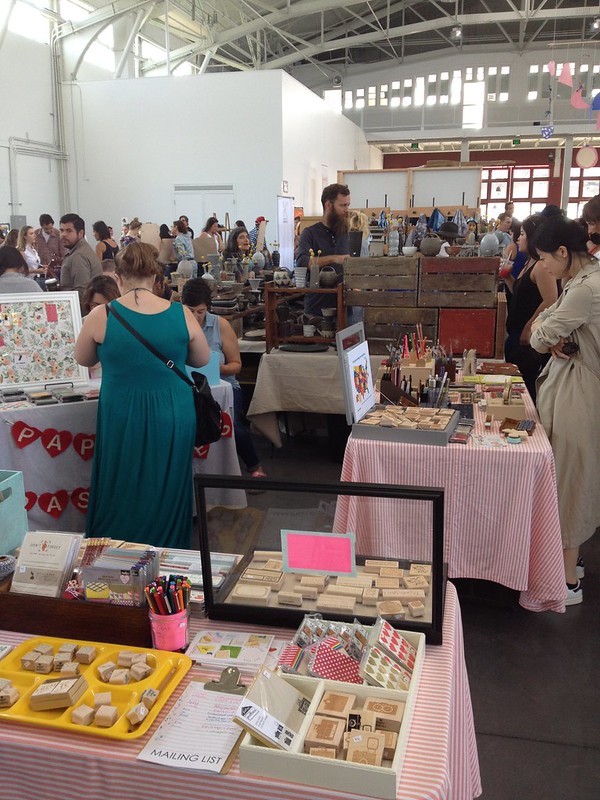 There were perhaps 60-80 stands in each building. There was a lot of jewellery - and a lot of that was laser cut or etched - definitely a recurring theme. I think it's fair to say laser cutting is now part of the mainstream. As for the rest....feast your eyes! 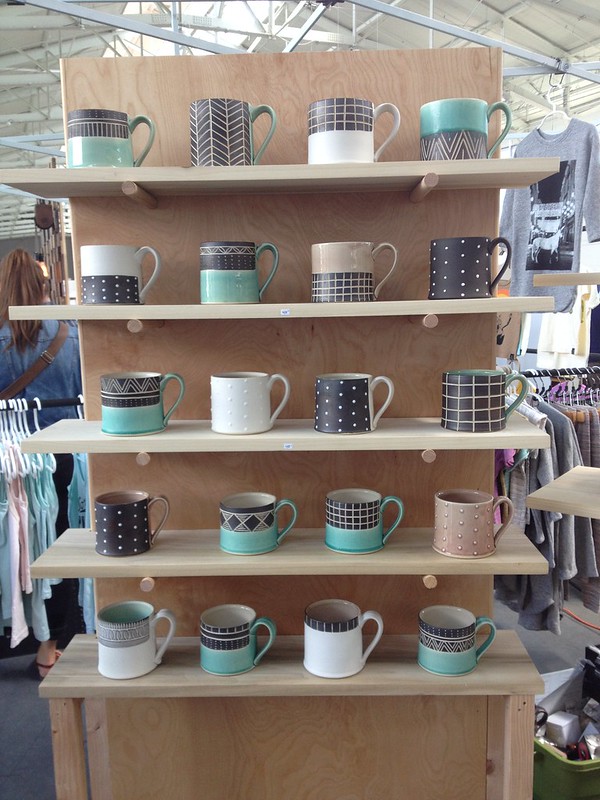 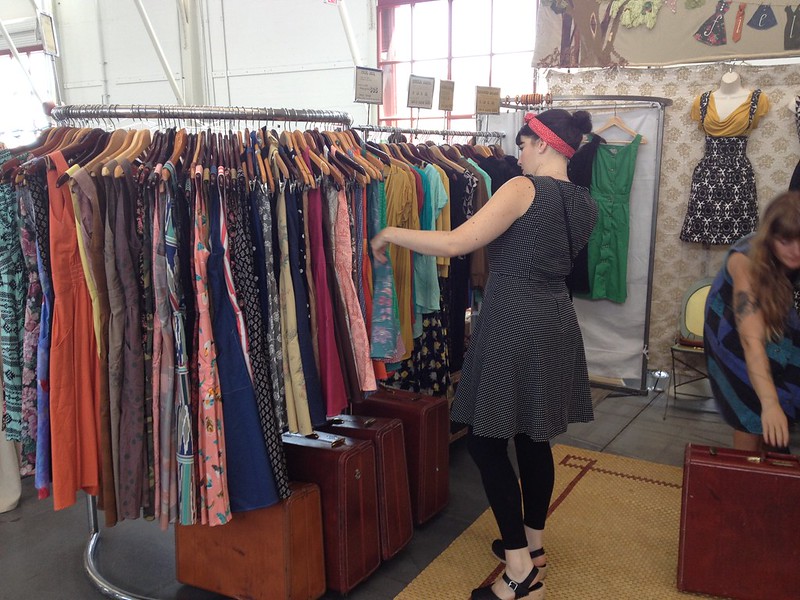 Make your own necklace. I thought this was an interesting idea. The cord was free and you paid for the beads - $5, $10 or $20 each from front to back. But I baulked at the idea of paying £6.50 for a wooden bead half painted. 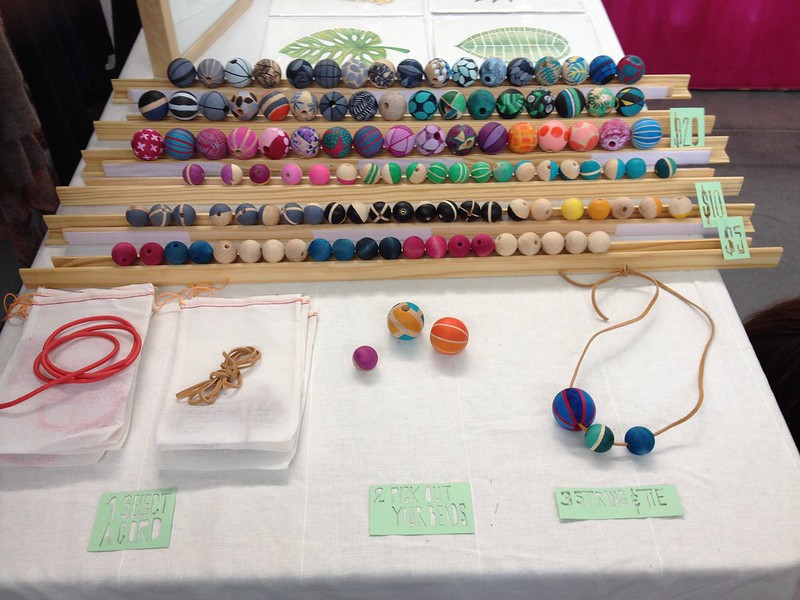 Planters or trinket dishes inspired my underwater elements. I was tempted by these but the price put me off a bit. These are from Relm Studios. 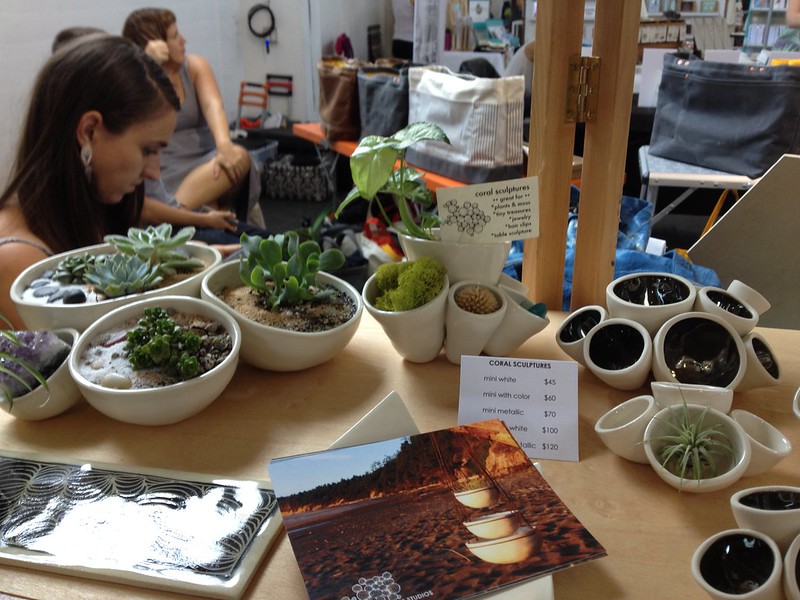 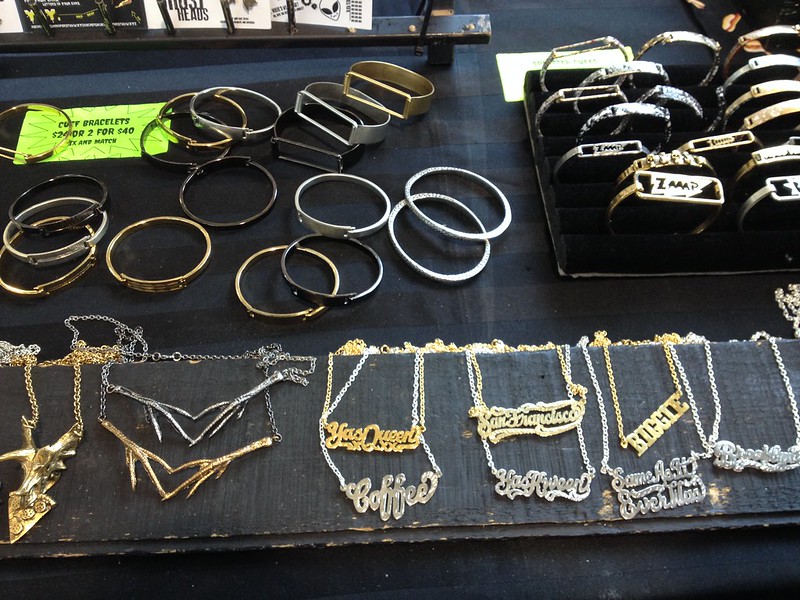 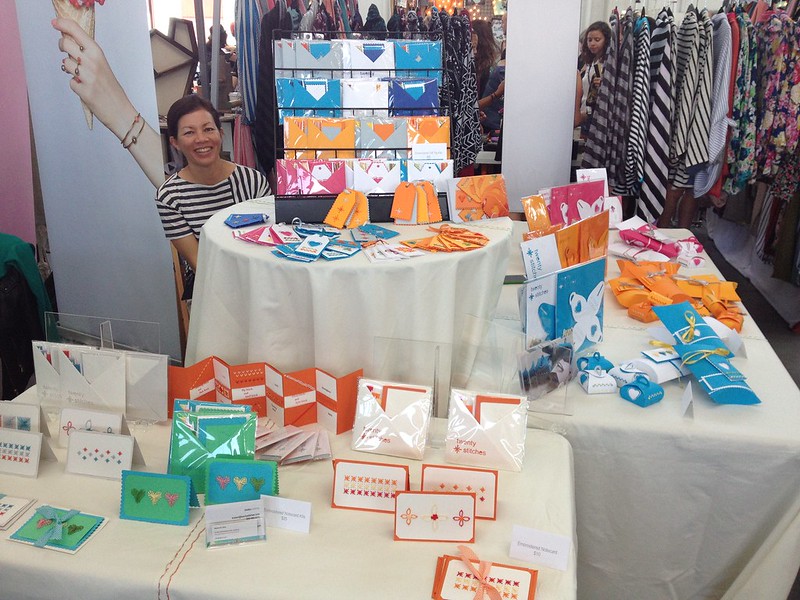 Nail decals from Cha Cha Covers. I really liked the look of these. 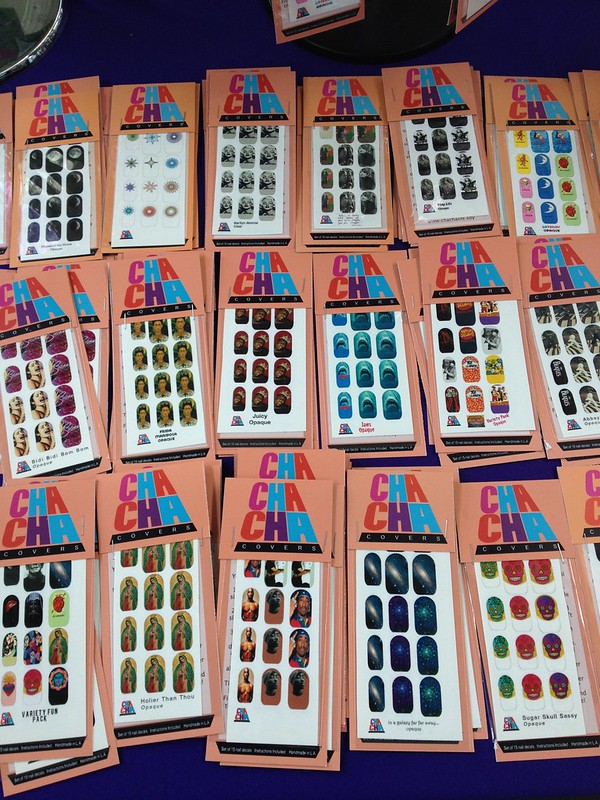 These guys were single-handedly trying to bring back the fanny-pack aka a bumbag in the UK. 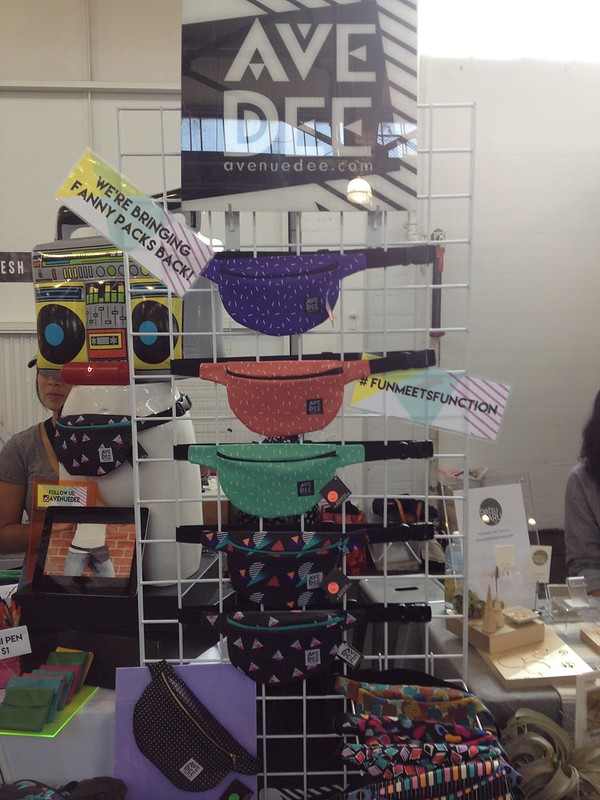 Pop out wooden sharks, whales and birds from Julio Carreon-Reyes. 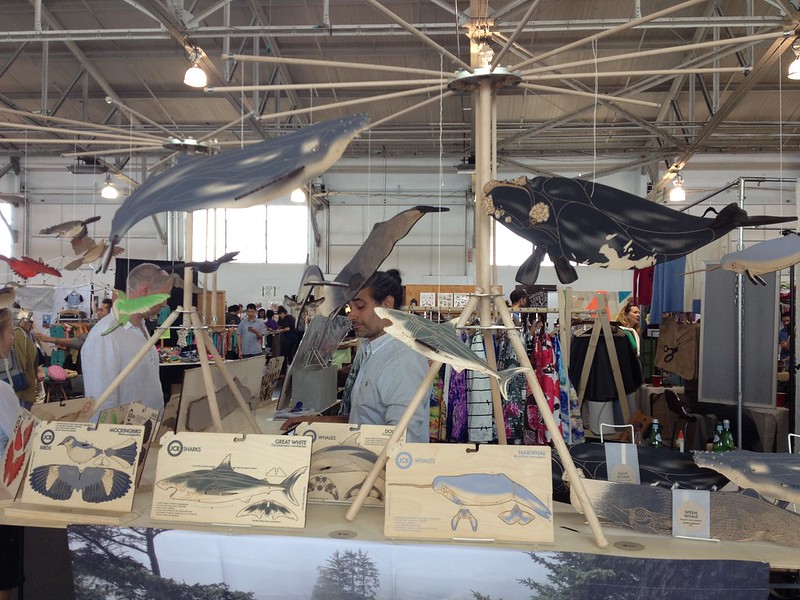 There were a lot of cards. I got some of these ones from A Jar of Pickles. 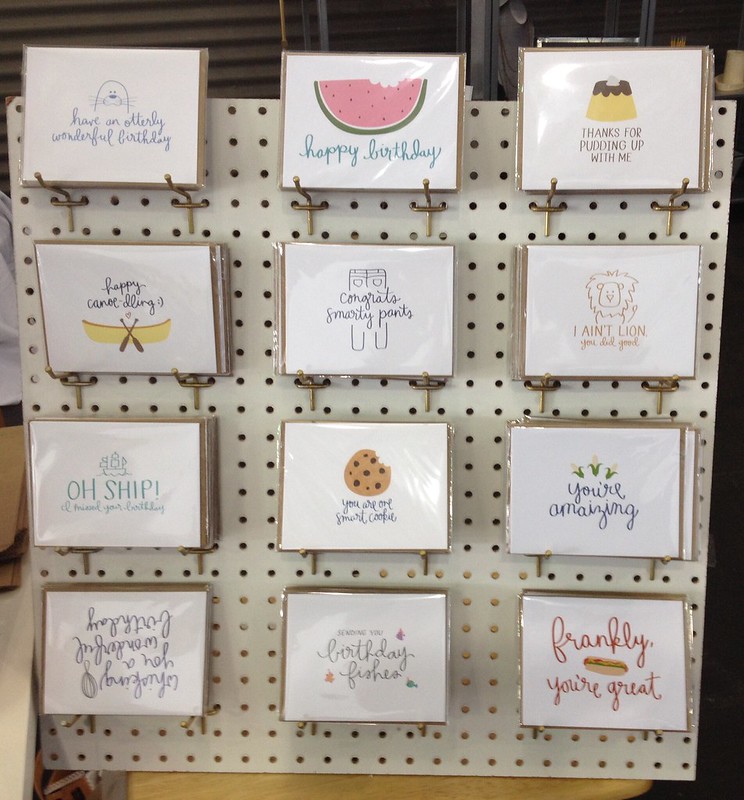 Speaking of what I got...here it is! 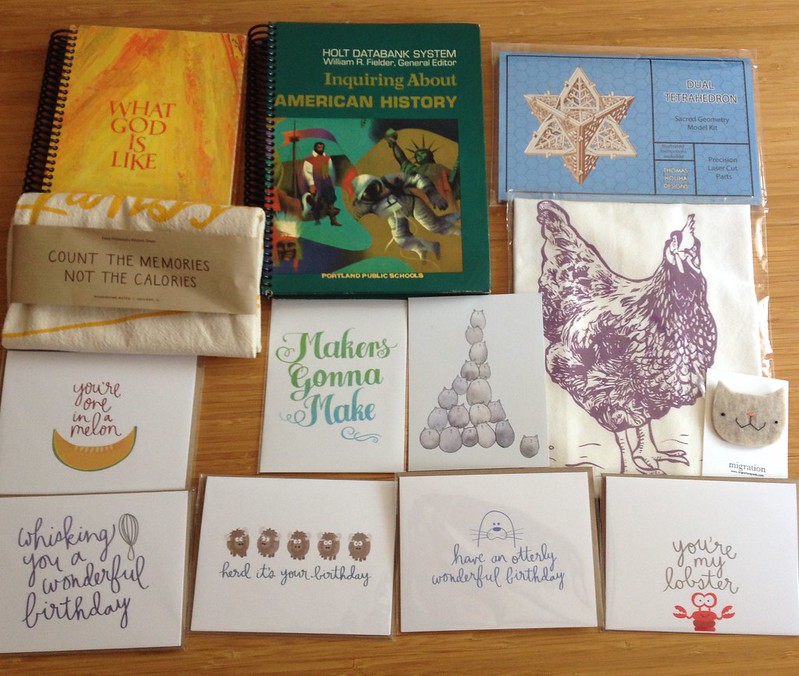 The spiral bound books are two of four I got from Ex Libris Anonymous who make notebooks out of old books. All four are going to be xmas presents. The cat brooch and the Makers Gonna Make postcards are from Migration Goods. The screen printed chicken is a tea towel and is from Rigel Stuhlmiller who is a local print maker. The 'count the calories' tea towel is from Nourishing Notes and was part of their food philosophy range. The Dual Tetrahedron is another laser cut and etched pop out thing that you assemble - due to be another xmas present - by Thomas Houha Designs. I also got some food. 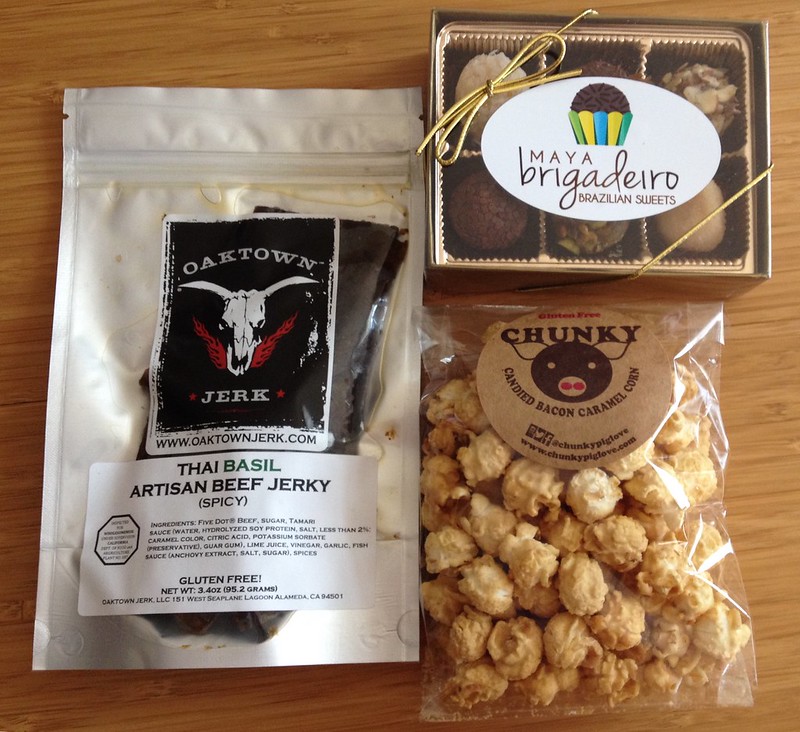 The jerky and Candied Bacon Caramel Popcorn are for Pooch while the Brazilian Chocolates (much more like fondant than french-style truffles) are to be "shared".

A month or two back I saw this bag at the MAKE Fair. 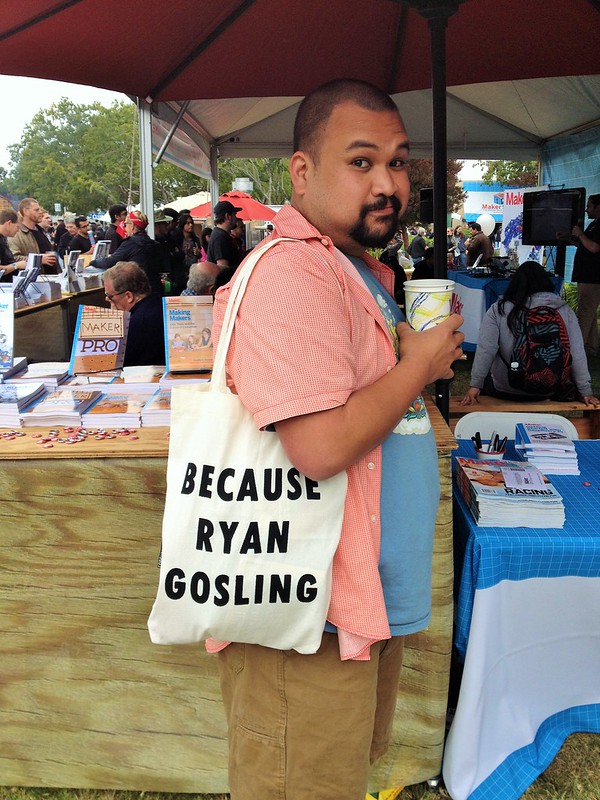 Today it was this bag. 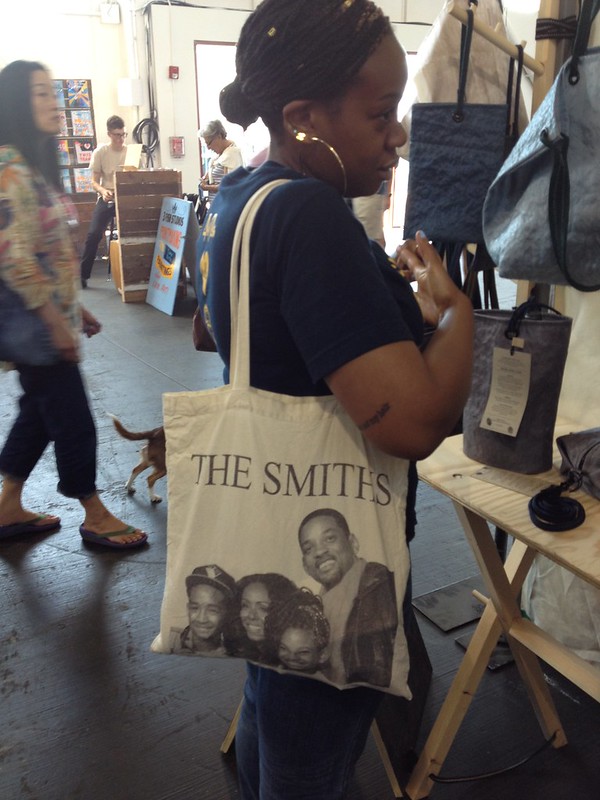 I kind of hope someone shows that picture to Morrisey one day.