I am not a tea drinker. But were I to be one I would never go to any cafe except KitTea. It only opened a month or so ago and I finally got there at the weekend. 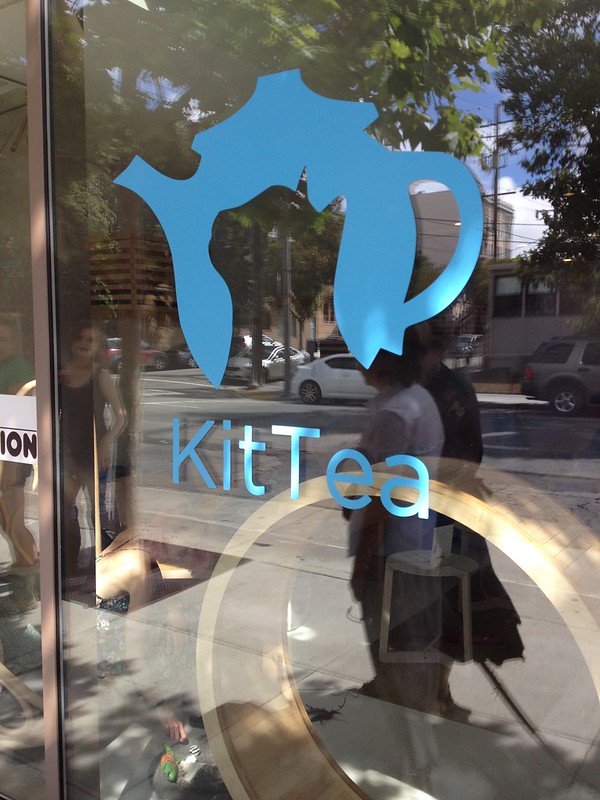 The cat cafe I had been visiting in Oakland is an hour each way including a 20 min walk from the metro when you get there. So although I love the set-up I was more than ready to get some cat time closer to home. I only booked 30 minutes since I wasn't sure if it would be any good but in future I'll definitely be going for the full hour. Even if you haven't booked a session with the cats, the cafe is very nice and has a huge picture window. 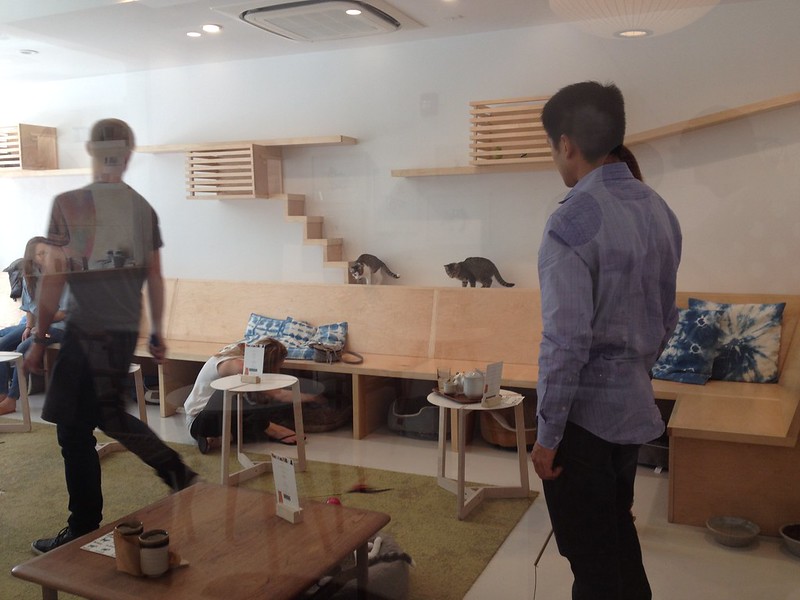 You get as much tea as you can drink during your booking plus there are cakes and things to be bought. When my time came I got to spend time with such a cute gang of guys and girls. 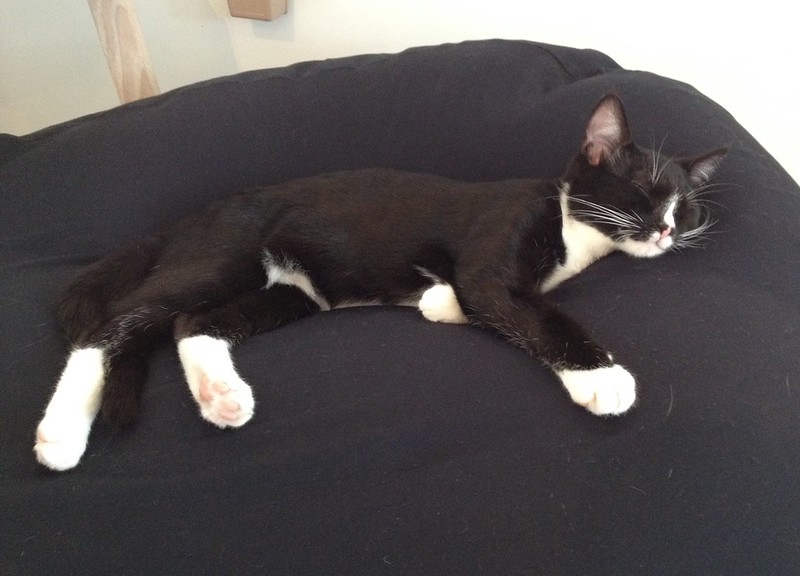 This tiny fellow came to sit next to my legs... 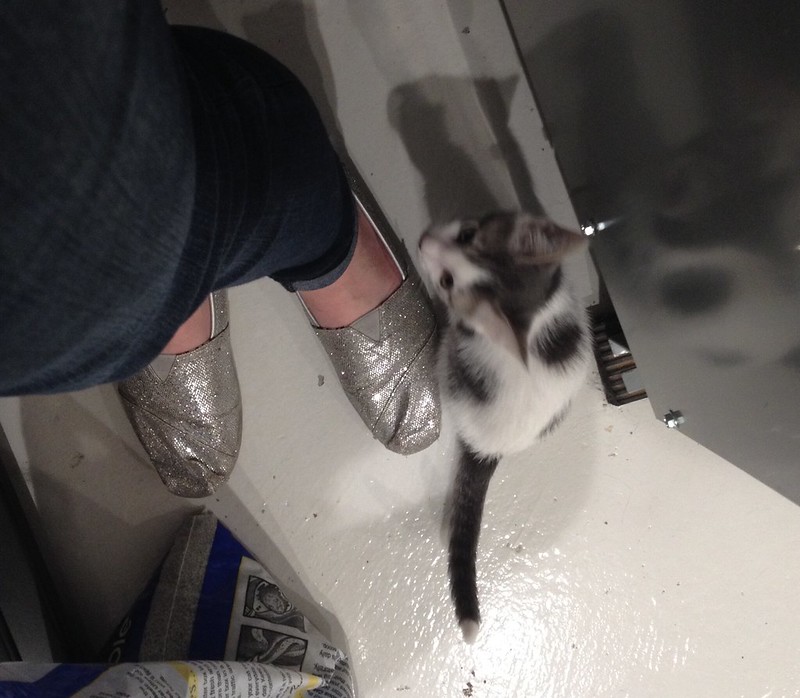 ...and when I squatted down to stroke him he decided to take shelter underneath my derrière. 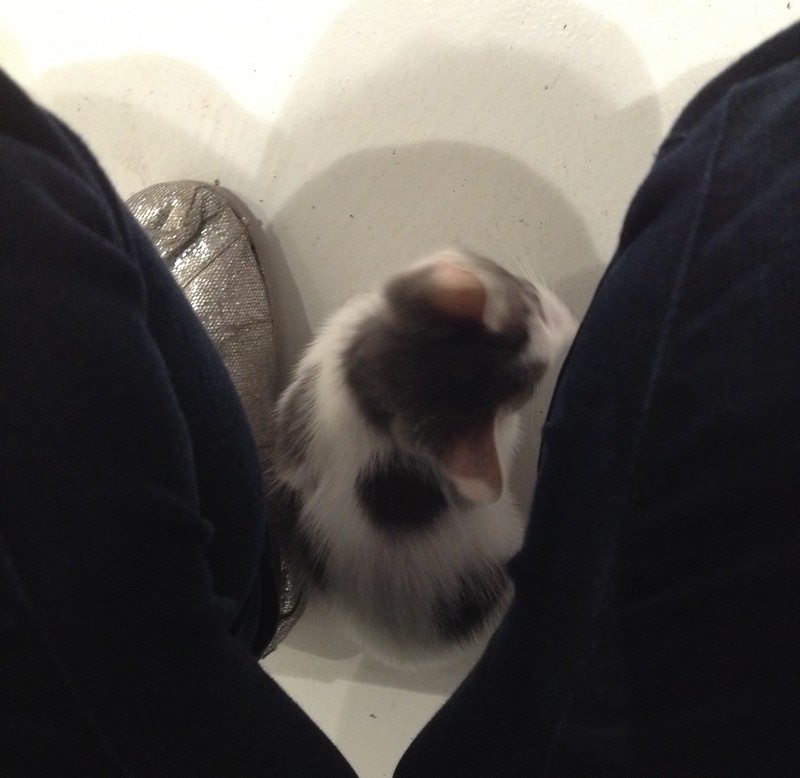 Then when I did sit down this little one came over and got straight into my lap. 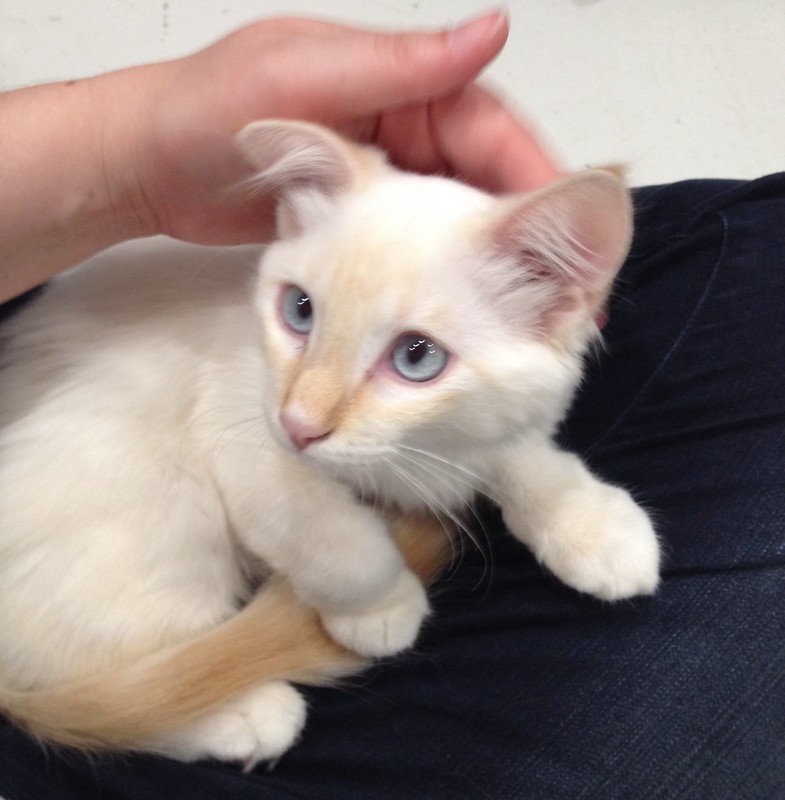 He was heading off to his new adoptive family later that day as this is also a place where you can adopt the cats there. I would have loved to take them all home with me!


Posted by littlelixie at 4:53 am 6 comments: Links to this post

"Haight Ashbury" is a phrase that comes up as soon as you start reading about the history of San Francisco. The area was swinging in the sixties and has been the centre the hippie culture of SF ever since. It is kind of like Camden used to be when I first moved to London but with more smoke shops. 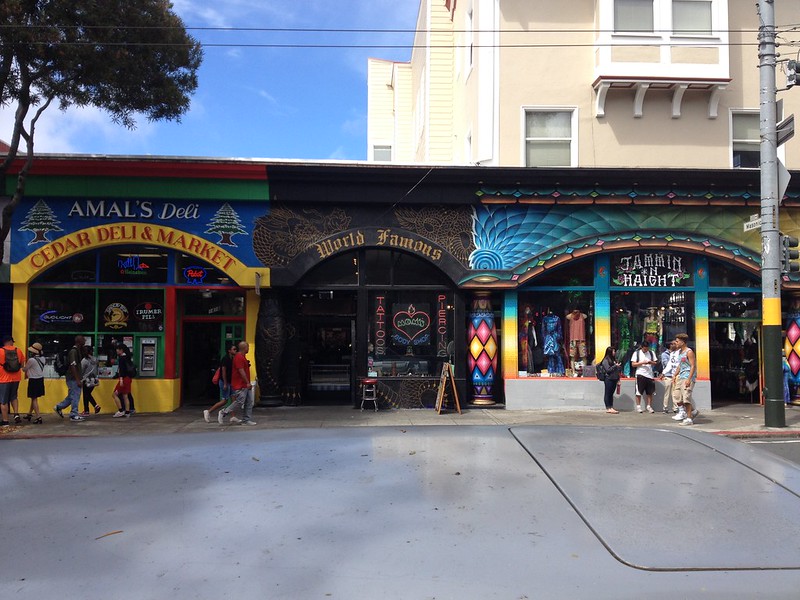 Haight Street is long - really long. The hippie bit is near where it crosses with Ashbury St but back towards the city centre there are some amazing houses. 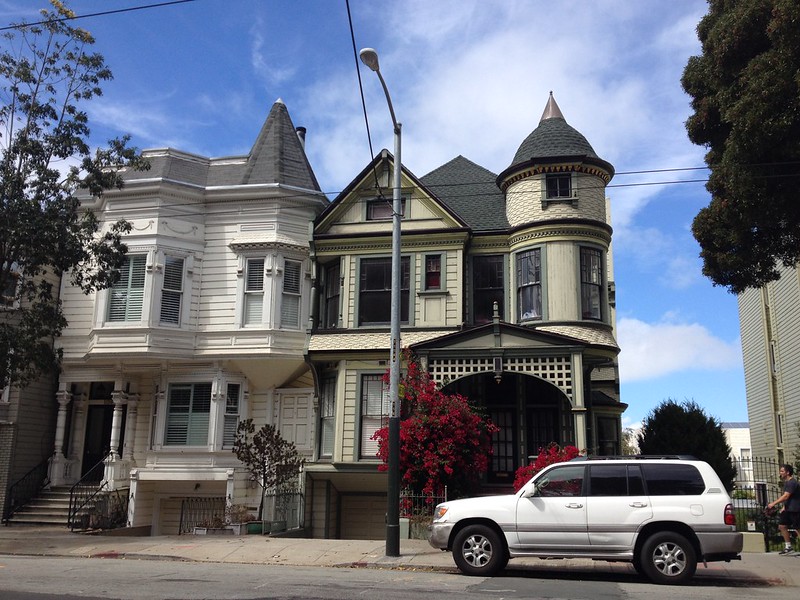 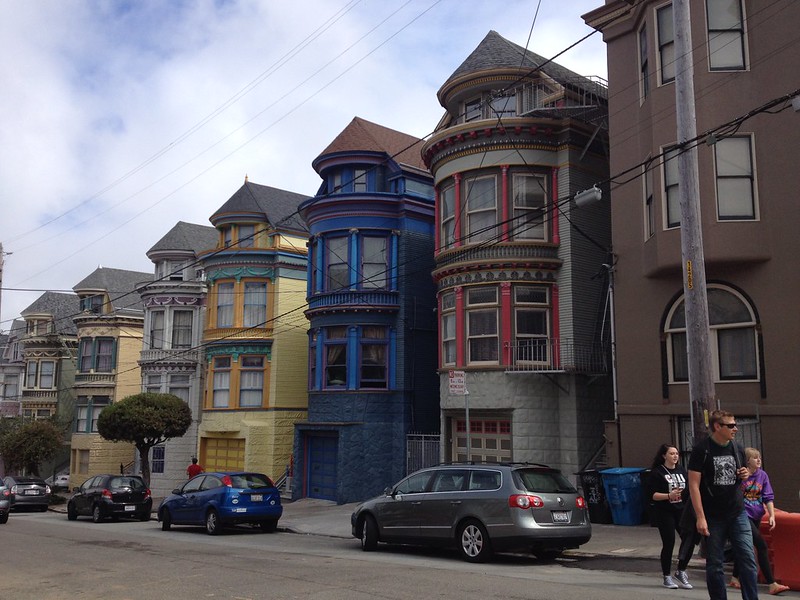 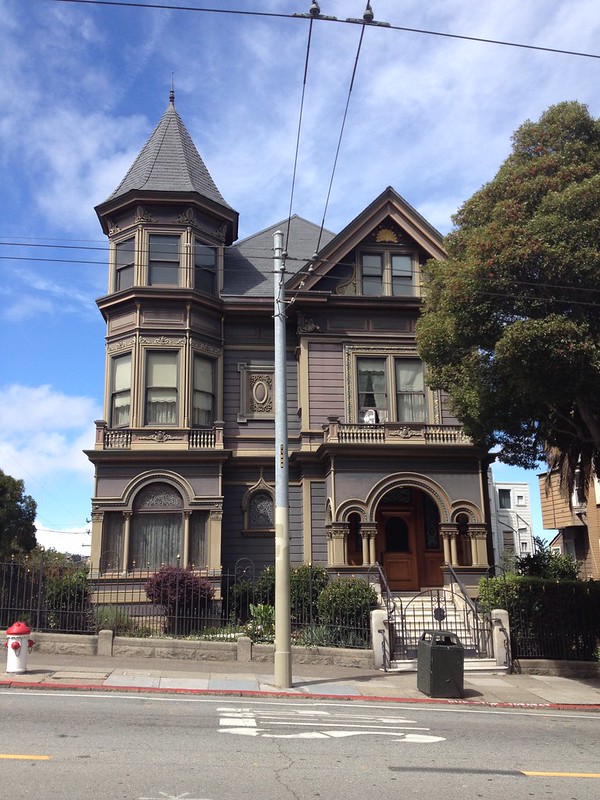 I knew beforehand that there were a few shoe shops in the area and I had planned on just some window-shopping until... 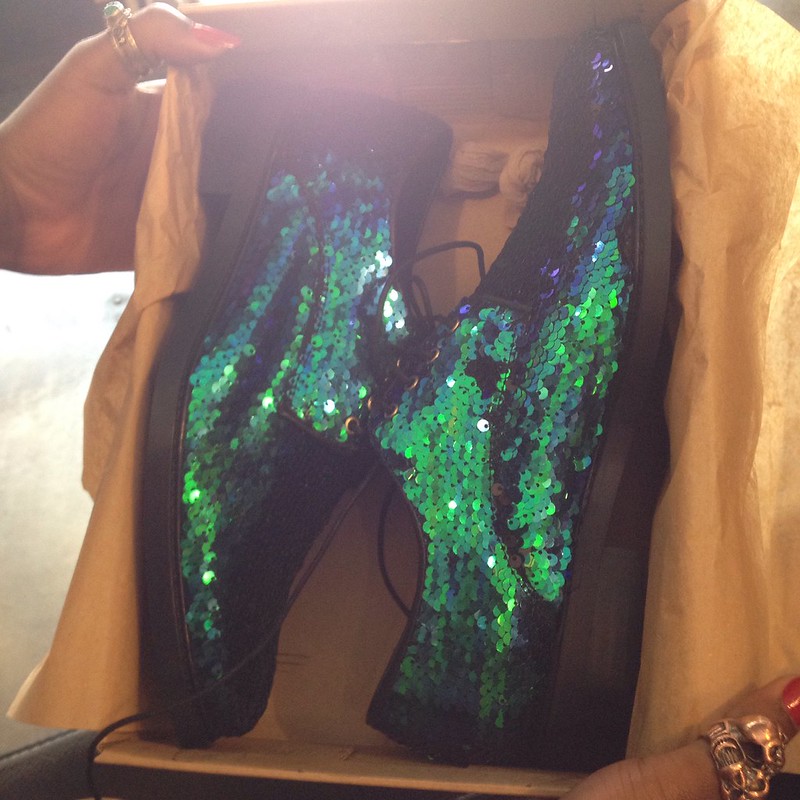 That is just them in their box but you should have seen them in the window. It was like seeing the glisten of mother of pearl in the midst of a load of dull shells. I went into the shop and made straight for them. They were...expensive. I toyed with them and the assistant came over, looked into my face and said she knew just how I felt. Did I want to try them on - just for fun? Oh my. I had hoped they'd be uncomfortable, but no. They are wonderful. And now they're mine - squee! One or two other things are now mine too. 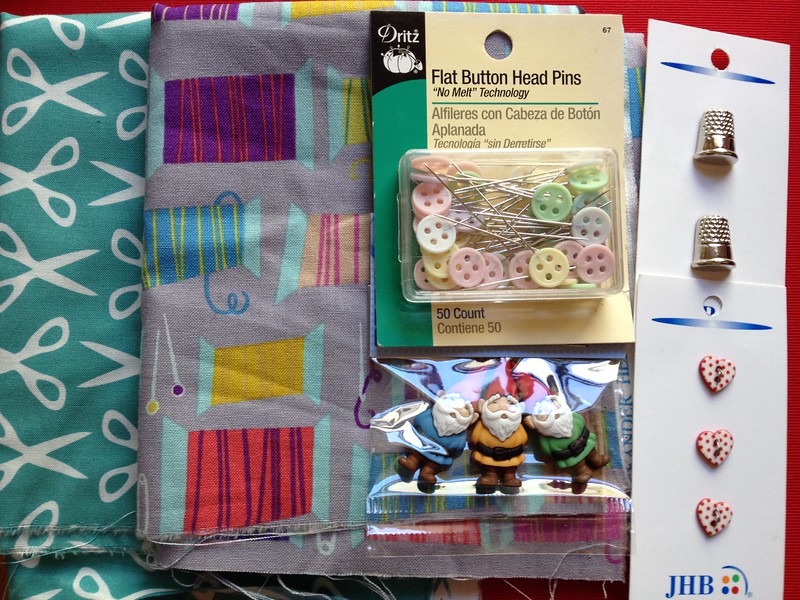 There is a lovely craft shop there called Mendels and they have an awesome selection of pretty much everything, including quilting fabric which they sell in quarter yards. I only chose two but then I saw this slightly heavier, slightly lineny cat print. 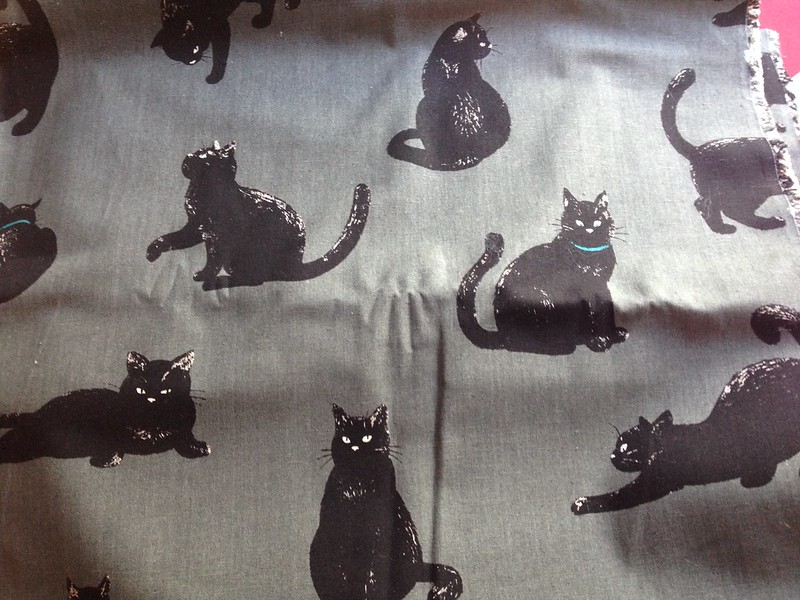 The colour is actually a dark grey-green and I got two yards so now I need to decide what kind of top to make out of it - since I feel it does need to be a top.

One of the things I like about this kind of area of SF is the locals don't feel constrained to just decorating the walls of the buildings. 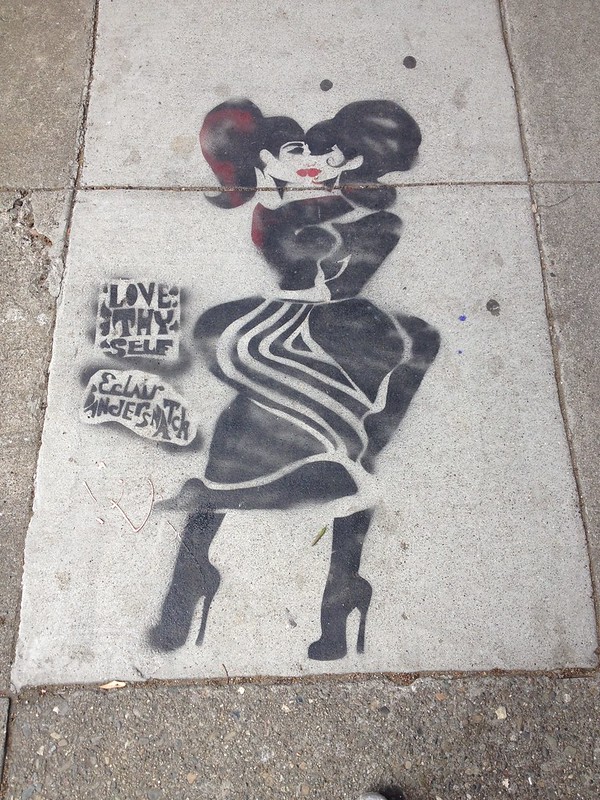 I rather love this "Love Thyself" one I spied on the pavement. It just goes to show how much you can gain from looking where you leap.

Posted by littlelixie at 1:53 am No comments: Links to this post