This has so far only been announced within the Guild, but the topic for the Challenge Quilts for the 2019 Show is to be "San Francisco". As soon as I heard this I had an idea.

When I was in Tokyo I used to love the manhole covers. 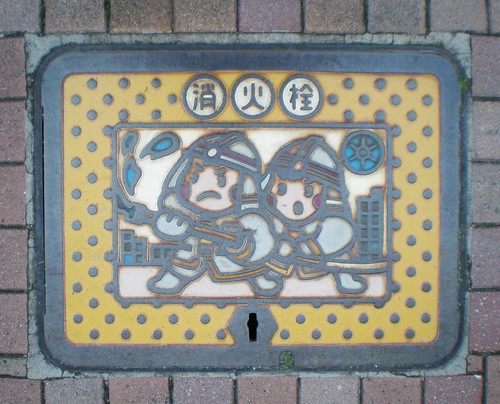 I collected them in a little album on Flickr. 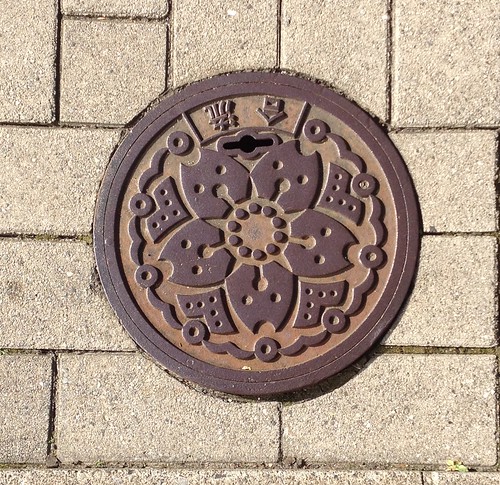 I only collected 15 but there are albums of many more than that. So when I came to SF I kept an eye out. There weren't many interesting ones but I started seeing this one in a few places. 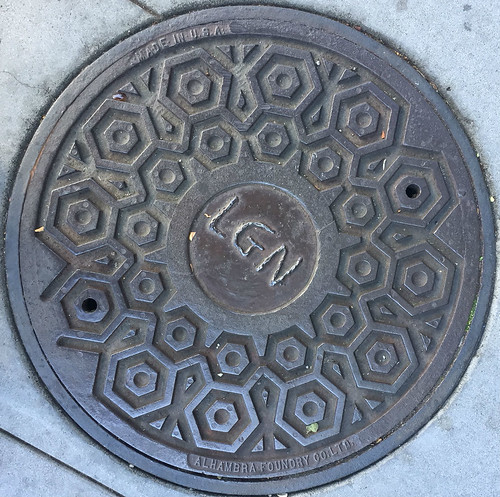 When I heard of the challenge, and with Mel Beach's Magnificant Mandala Class so recent in my memory, you can understand my thinking. This is what I made in Mel's class. 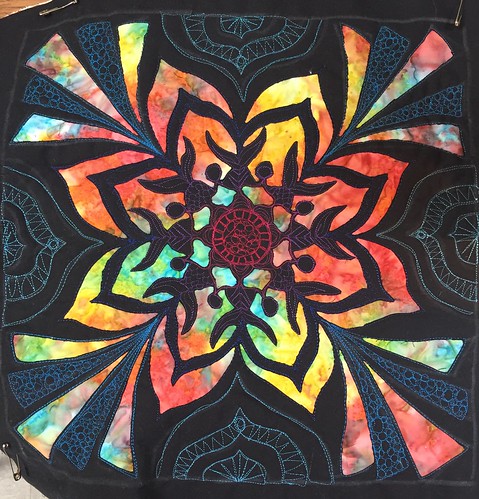 My first thought was to make a mandala based on the manhole cover. But then I thought about how well it would lend itself to EPP (english paper piecing). Hexagons are my absolute favourite shape generally as well as in EPP. And I feel more comfortable madala'ing with curves rather than straight edges. But...the challenge quilt isn't due until at least February so I'll have to see what my mind tends towards in the meantime.

Posted by Lixie at 5:01 pm No comments: Links to this post

Have you read the book Steal Like an Artist? (That image is an affiliate link to amazon.)

I've had it on my amazon wishlist forever but finally got a copy from the Library (SF Libraries are brilliant). I decided to buy a copy because I know I am going to want to refer back to it a lot.

I have been spending months contemplating the infinite and what to do with quilting. The question that kept going around in my head was "What is my style?" and the answer seemed to be "You do not have one." I have a bucket list of quilt styles I want to try. Actually this is it: 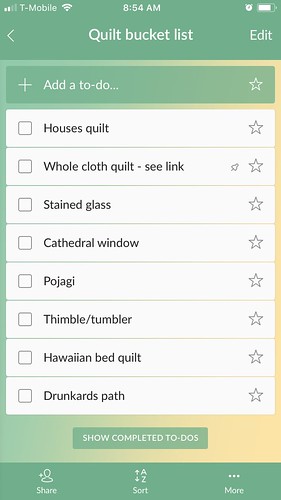 I use an app called Wunderlist which lets you make multiple lists and add info and whatnot. As a list addict I've tried a ton of them and this is my favourite. But I digress. What I kept thinking was, if I keep fannying about and trying out different types of quilts, then that must mean I haven't found my personal style yet. Because if I had I'd be like Bonnie Hunter or Joe Cunningham and you'd see a quilt and say "I bet that is a Joe Cunningham quilt". But then actually if you click on their names (non affiliate link to a google images search) their work is pretty diverse. It took me months of solid thinking to get to that point. Then I got hold of Steal Like An Artist.

This is not a long book. Text is big and pages are small and there are lots of illustrations. Chapter 2, or possibly the second rule, is called "Don't wait until you know who you are to get started". Genius. He then goes on later to talk about how bad Jurassic Park 2 was. We're talking about the sequel to the one with Jeff Goldblum and Richard Attenborough in, not the reboot. He loved the first one so much he wrote his own sequel and then when the actual sequel came out it was nowhere near as good. This leads to a suggestion that you make your hero's next piece of art. Write "The is America" part 2, paint another Pollock, sew the next Cuningham. Oh ho, I think, I did a class with Mr Cunningham in 1901 and still have the unfinished top in my drawers, so to speak.

Here it is. WWJCD? He'd add bias tape, obviously, so I auditioned mine (bottom of pic). 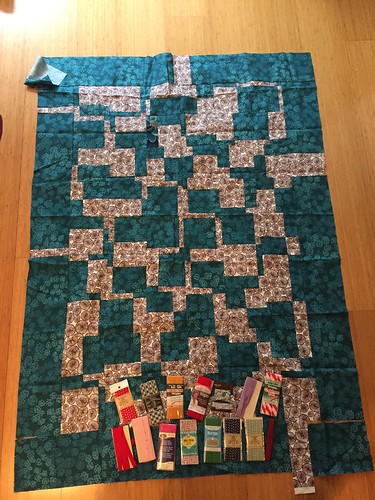 The winners were painstakingly wetted and ironed into circles using a high tech template (baking parchment with circles drawn on it). 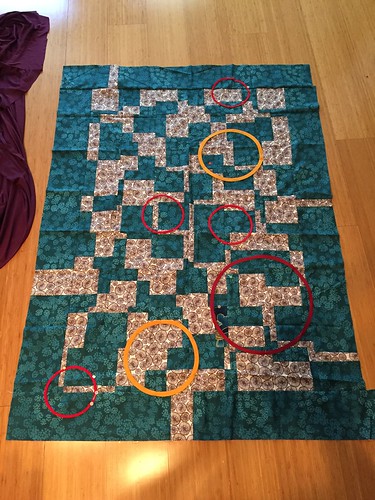 I went totally nuts and used my twin needle for the first time in my life and after having got one with each of the three sewing machines that preceded this one. It still seemed to be lacking something so I decided to embroider it. A small self portrait, bottom left, I thought, based on the photo Roc just took of me (in my previous post). More auditioning of thread. I decided on the clothesline, obvs, which is a bit too thick to embroider with SO... 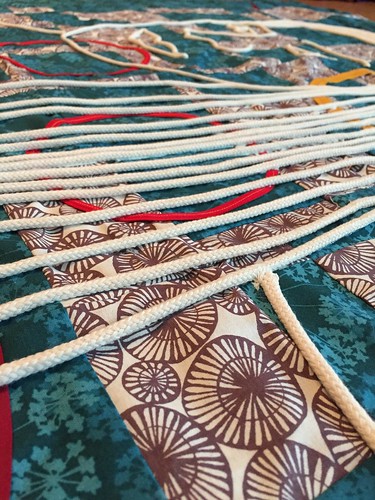 Possibly a pro wouldn't have used quite as much glue to get the fecking stuff to stay still but I am only pretending to be a pro so it's fine. And now for the quilting. I decided to KISS and went with straightish lines. Naturally I ran out of the first bobbin 2 rows before the end. 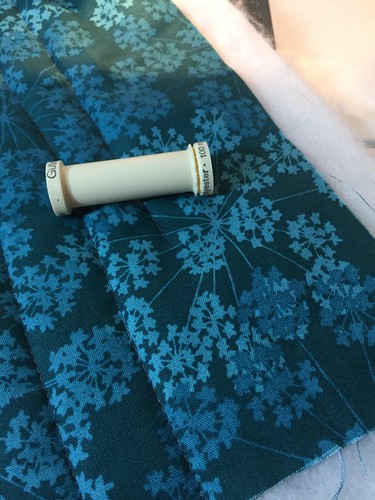 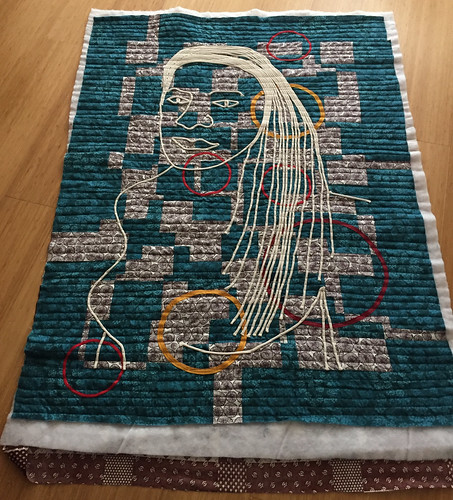 The small portrait, bottom left, grew somewhat. I am also slightly worried that it is TOO derivative, especially thinking of Joe's portrait of Luke Haines. But I figure the next one will be less so. Naturally I will trim and bind it soon. Soonish.

The one thing I always hear from quilters is that the way to develop is to work in a series. So it will come as no surprise to hear that I have already cut out and sewn the base of the next one! I did fairly amaze myself since in the past it has taken me years to cut out and sew a quilt. In this case it took about 5 hours. It just goes to show the power of motivation.


Posted by Lixie at 6:01 pm No comments: Links to this post


...I also have new workshop outlines to put it on. I am the newest teacher to join the Sips N Sews crew which I am very happy about. I also have another workshop coming up at SCRAP which they tell me will go live this week. AND I am teaching for the SF Quilters Guild in a couple of weeks.


Here is the list of what I'm currently offering: 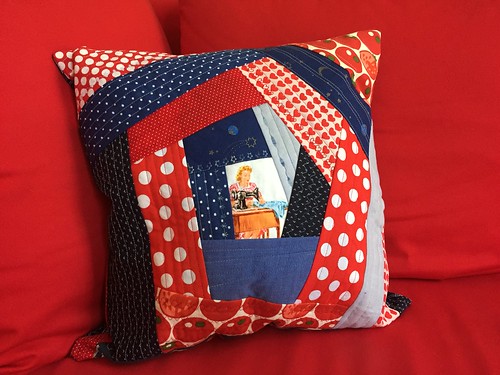 The project is a cushion cover but I've taught this using hand sewing only at SCRAP and we did pin cushions. Photos show samples. 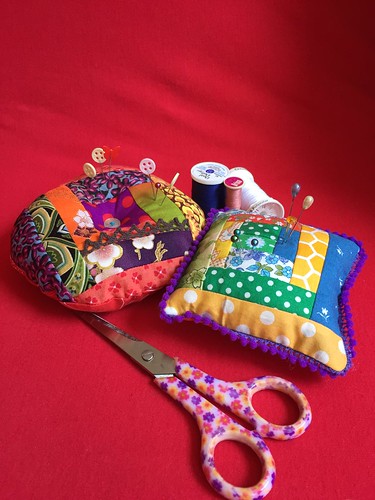 Making the whole thing from start to finish! Pattern included. 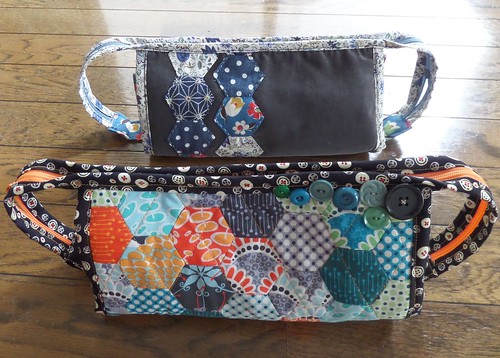 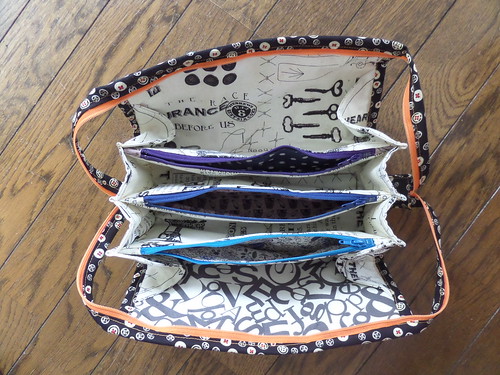 I just made my first one with pompoms and ricrac. Hello silly bowls! But easy to make them classically lovely too. 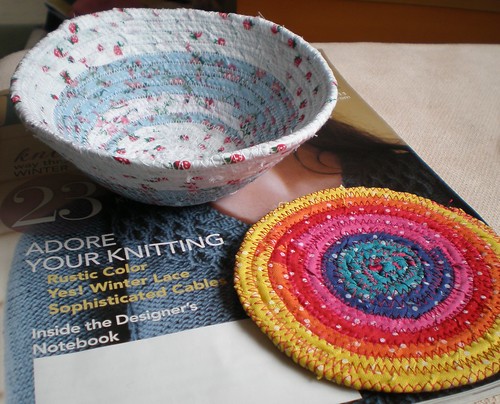 We'll be starting with the 'usual' square weave then trying triaxial or 'mad' weaving. Rainbows are optional. 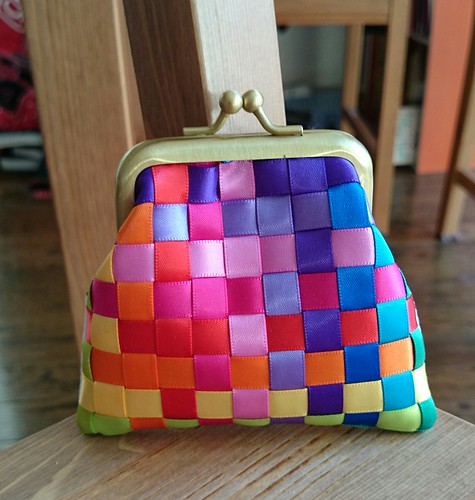 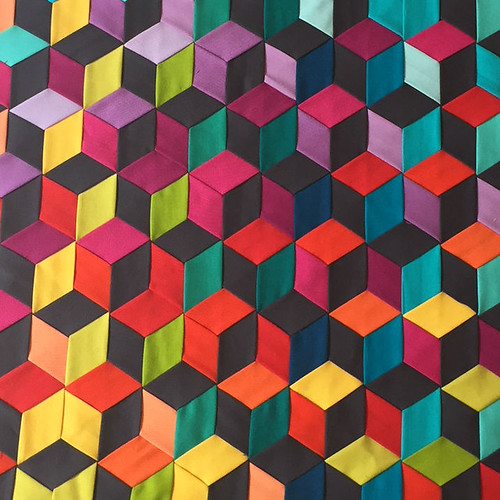 Posted by Lixie at 1:05 am No comments: Links to this post