You know how I cut down another pill last Saturday and then haven't mentioned it since then? Well the fact is I basically forgot about it which is a good thing really because I wasn't being hyperaware of possible side-effects. But then when I found myself freaking out about not having a wedding dress (the wedding is 14 months away so this really is not a problem) and about to burst into tears on Oxford Street it did occur to me that maybe just maybe I was having a bit of a reaction. And sure enough when I got my mirror out (does everyone obsessively carry a mirror in their bag? I mean, what if you get an eyelash right?) and there I was with one pupil "normal" and one like a soup dish.

I'm not saying this is a failsafe diagnostic tool but I have consistently had weird dilation effects from any increase or decrease. It all looks a bit david bowie and small children do run away from me screaming for mother. So obviously being in this highly fragile state my first thought was 'sushi'. Actually this isn't quite true. I first did some really divine confused rambling as I was trying to buy a magazine (for no real reason, just felt the need) and kept going in and out of the same places and up and down the same bit of oxford street. I did think the security guard at Bond Street was going to ask me to accompany him after I drifted past with my crazy eyes for the fourth time. After I had stuffed my face my next thought was 'bed' so I dived home and got into it and was asleep by about 8.02pm. My eyes are still kooky which makes me dizzy and so I am having a day at home knitting bedsocks for a little old lady somehow related to someone at Golders Green. Poor thing has swollen ankles and feet of a massive 6" diameter so I am actually doing these socks in the round. Although that's actually on a circular rather than the dreaded dpns.

Before I go I have found a new spiritual home....Little Knits. Not that I haveany cash but when I do get paid, that is where I'm heading. I'm just waiting to hear cofirmation that they deliver to the UK. Anyway, I think that's enough for now. I'm just going to dizzyly wobble back to bed for a snooze.
Posted by littlelixie at 11:13 am 2 comments: Links to this post

This is the message I got from them:

" HI i sorry to hear this. Cheryl is away for a family emergency and asked me get some details from you. The type of yarn, colorway, store you bought it at, and the dyelot. She said the plain blue the dye molecule is larger than the yarn molecule. When we get some of this info we will resolve this problem for you. Again sorry about this. If you would like to send us the yarn we will look at it and see if we can find the problem and we will get this dealt with for you. Thank You Kylie "

I only just got round to replying so will see what happens next. But that bit about molecules doesn't make any sense. You can't blind a scientist with science.

Posted by littlelixie at 11:10 am 2 comments: Links to this post

Well people, here we are again at 3.25 pm on a wet and cold Tuesday afternoon in London, England. I have been passing a lot of today by listening to Ask A Ninja and Tiki Bar TV on iTunes. And how can this be I hear you ask? Well guess what….I’ve run out of stuff to do again.

Actually let’s be realistic here. I have got bar charts to draw. Bar charts. I have a physics degree and am about to start an MBA and I am drawing fricking bar charts in excel. Here, allow me to share a bar chart with you. Oh go on. 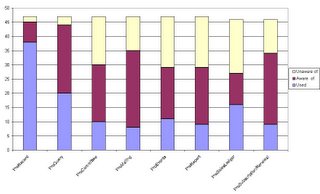 This is what we refer to in the trade as a-bar-chart-with-three-colours. Jesus. I’m so bored. Someone come drop something on my foot. Then I can move to the exciting surroundings of A&E.

So what to do about this? Weeeeeell, I have told Sean. He knows. He is clued in on the fact that I am underutilised at this moment in time. However he is behind me with an qualified accountant at each shoulder with all three of them trying to work out what happened to £500k because the auditors are in and they would actually quite like to know about it. And the auditors are in. “In” being a reference to in-the-room-with-the-whiteboard. So I can’t even go hang out in there. I could just go wonder off for an hour I suppose. No one would notice *sob* because they know I have meetings and stuff. Actually I could just choose to go home. Ooooo. I could tell Sean and he wouldn’t say anything. It’s 90 mins extra knitting. It's a bit weird though. And he's still over there trying to find the £500k. Could have a doctor appt....

Hmmm…. I’ll let you know how I get on.
Posted by littlelixie at 3:35 pm 1 comment: Links to this post

(and other bad bits of french).

That's it, the non-pink one. I thought I'd put the original in the picture as well for comparison. It's got a bit shapeless over the last year but Pooch says it is still superior. Here is a detail of the new 'smarter' bag.

Design imporvements include crocheting up the 'corners' to giv it some definition. This has kind of felted bayonf recognition on the left there but it does work. And then sewing the i-cord handles to the inner side of the stitches only so the front of the st st doesn't get mangled and distorted.

I have been updating this in light of the arrival of the invites...

This is the official record of our engagment and so far contains all the cards we got when we first announced it and now...

...the invitations, front and back. Yep, they are postcards. We have a limited budget and I adore tulips so they're everything I needed in an invite. Now to some this might look suspiciously like scrapbooking. Oh dear me no, no scrapbooking here. Just sticking things in an album. Not scrapbooking. No.

Rocketing off to a different topic we have the latest addition to Yoshimi's wardrobe, a little intarsia raglan. Need to pick up round the neck and join the side and arm seams and then it's done. I did think about cheating and claiming this as my project spectrum project but now, I am too honest. This morning I woke up with my mind made up and cast on a second pair of wrist warmers.

This is in the lovely james c brett which is surely becoming an obsession for me. Not much to show yet but I have posted because this actually IS the project spectrum project for March.

I can't remember now whether I mentioned this yesterday but I found an organic baby shop right by the cutty sark in Greenwich yesterday before I met up with Ruth and just couldn't help falling for these.

There is a reason for this. I am totally up for having a royal family and think they are lovely despite their philanderings and foibles. So when the golden jubilee came round I wore union jack pants and lusted after some union jack shoes I saw on oxford street. In the end I gave in to my desire only to find there were basically none left in a suitable size in the whole damn country. So now I am projecting this onto Shimi. Poor little thing but come on, aren't they awesome?!
Posted by littlelixie at 11:31 am 3 comments: Links to this post