I have a yarn problem

I just found myself on cpu-enterprises stalking sirdar snuggly for a baby blanket. Geez. I did it without thinking.

I was actually thinking about this last night. I buy things in order to do them later. I then end up having to sit amongst all my hasty purchases long after the desire to do XYZ has passed. Doing a bit of self-analysis this could be put down to a couple of different things.

There are probably more. It's the last one that worries me a little. Therapist Louise has gone AWOL so I'm having to do my own diagnosis which is always a bit suspect because my diagnosis is inevitably 'lacking in chocolate'.

Popped in on my SP recipient yesterday and she is very sweet. She has made good use of the bits I sent her last time. I was thinking there would be two more parcels but now I think it will be one bumper one in a week or two plus the big unveiling.

SkipNorth will be 9-11 March 2007. You heard it here first! I will let you know when the website is updated and I have more information. Will be able to take bookings within the next month I should think.

Posted by littlelixie at 12:59 pm 3 comments: Links to this post

I just did the tiniest bit of fairisle for some socks and now it haunts my thoughts... The following is the result of a particularly painful meeting yesterday plus the investment in a squared notebook. Hours of fun.

It started innocently enough with the idea of a really simple hugs and kisses theme band.

Turn your attention to top and bottom right. Of the two the bottom would be easier but then the top does look rather fun. I guess the answer might be to start with a front and then see how that goes before attempting the back. Any thoughts, wise readers?

I did a bad thing today. Actually this leads on to a bigger issue. My obsession with knitting has reached really quite cosmic proportions. I just don't think about anything else. Maybe this will calm down again once I am returned to the bosum of my stash on saturday but it does worry me a little. You see I asked to be notified when sock hop was back in stock (scroll down the page). Helen had some and that stuff is just beautiful. I got an email last night saying it would be available from thursday morning west coast. I am english, right. I do not know what time a west coaster would consider to be 'morning' although I was hoping it would be about 3am as that is when I first went online to see if the link was live yet. And I refreshed. And refreshed, and you get the picture.

By then I was a bit overexcited and let's just say that the issue of whether I am going to splurge on a spinning wheel this month is definitely an issue no longer. Let's also say that I've got the yarn I need for my xmas socks. It's just so darn beautiful. May I be forgiven but just look at this. Handspun, plied, plus machine washable? Who could not fall for it?

My secret pal hostess has posed the following question for us to blog about...

Someone has stolen your stash and all your books: now what are you going to do?

In fact, and this is even worse, I have the plymouths and some crochet hooks at Alex3's and have some sock yarn from both the sockhop site and ebay, god, AND CPU enterprises (link in menu on left) in the post AND I have three zimmermann books coming my way AND the yarn harlot's book arrived today and I also have vogue-shawls-to-go in the post so I'd be OK for a day or two. You see what I mean about it becoming an obsession. Where is that counter website thing. I'm so going to not spend anything else on knitting until.....after the festival of quilts on 18 August. (I can hear the stashalong people groaning and saying stuff like "big wow").

Take that, knitting addiction!
Feel so lonely now.
Just me and my stash.
If ever I worry about the size of it I just think about Yvonne and her using the space under the bath to store yarn as everywhere else is full. Now that is impressive.
Posted by littlelixie at 4:15 pm 2 comments: Links to this post 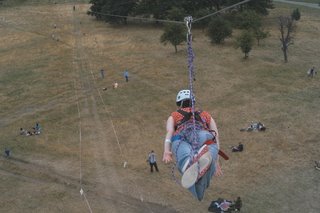 Posted by littlelixie at 9:39 am 9 comments: Links to this post

This post is dedicated to SPM because she is wicked. I am rereading her "At knit's end" which is a fantastic book. Every page bring more truth, humour and knitting reality. For example...

Under this SPM has written a wonderful paragraph about hiding your stash around the house. So true.

Actually in trying to find bits to quote you basically have to copy out the whole page in order to get it to make sense. This is because it is worthy writing rather than some little soundbite thing. Every page makes me laugh. So I have ordered her other two books! In fact I've had a bit of an amazon blitz and ordered vogue shawls to go too. It's that one on the cover - it fascinates me.

I'm finding it really hard to concentrate this evening. The trip to Ikea last night (got a new wool box) only ended at about 11.15 and I didn't sleep well because of the heat. Plus I'm on my second of three potential episodes of murder she wrote - now I remember why I don't have sky. It just wouldn't be safe. It melts the brain. And its so fricking hot! OK, I give in I try not to complain about it being hot because I hate being cold so much but ENOUGH!!!! Jesus H Christ on a bicycle, as my mother has been known to say.

I have seen the photos from the jump on sunday and have one on order so should be able to share it soon. Note to self - sort this out.

I distinctly recall thinking of loads of pithy things to write here when I was on the air conditioned train but they've melted out of my ears.

I don’t want to be ungrateful but if you buy me an ice cream from the shop on the corner as a surprise please don’t make it a fat free ice lolly. Dude, if you’ve got something to say then just say it... *

I did that crazy 1000ft slide yesterday and got nicely sunburnt in the process. I will have photos but not for a few days as I am off to Bristol tomorrow for the most boring of meetings. One good thing about this is that I will get a chance to catch up on th idiocy that is byrne. I impetuously started a baby cargigan yesterday after seeing Pooch's preggers cousin's wife at the wedding and basically it would only fit an extremely premature baby. Going to rip it on the way home (hello fellow tube travellers - not just knitting on the tube but unravelling knitting on the tube) and redo it on bigger needles and twice the size.

I am very excited because I am off to Ikea tonight with Alex (Alex 3 or Alex Mead as he is known. Confusingly to the gang he is Boy Alex whereas for me BoyAlex is Alex Connor. Despite being Alex 2 he is never referred to as such. I, naturally, do not need a descriptor to distinguish me fnah fnah). Have been trying to think why ikea is so good but it's really just that you can get insanely practical things in weird colours and materials for £2. What more could I want?

Am moving back to the Pooch pad on sat/sun. Got to rush home and make the most of my chill out time til then.