There is a woollywormhead pattern in knitty, which also contains umpteen other cool things. I am joining the knit along for it! Click on the button below to get to it or the pattern is here.

This is me, right? 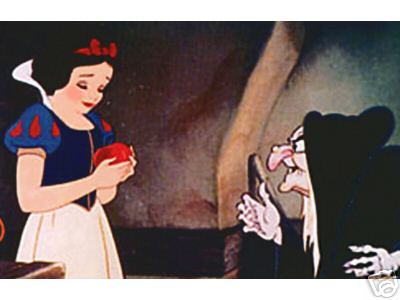 This is me, right, with a young lady we will call Vinnie. Except she's not holding an apple. It's more like she's holding her first ever piece of red knitting. She managed to do it without a mistake and even cast off and on with no problem. Not too shaky for a newbie. Incidentally, mobile phone covers are the new pot holder. She was just lamenting that she is away for the weekend and has nothing to knit on the train. Oh yeah. I got her good.

I don't have long to blog today as just as I sat down to do this the xmas fairy landed in our office and I got heavily involved in The Decoration Project. Believe it or not I am one of the tallest on my floor (at 5'7" - place is full of midgets) so was called on for lots of sticking of blue tak. Fortunately we have a temp in who is seriously 6'10" and so no standing-on-rotating-office-chair-accidents took place.

Off to see Sound of Music tonight with the in-laws and then a weekend of family style debauchery - i.e. Greenwich market and Harrods. Have a good weekend everyone!

PS: BUY THE ZINE ;)
Posted by littlelixie at 4:24 pm No comments: Links to this post

Nope, not a return to madness but the title of a great song that Will Shatner stars in. Let me lay some lyrics on you...

Is this all there was?
What was all the fuss?
Why did I bother?"

Now, maybe you won't suffer maybe it's quick
But you'll have time to think
Why did I waste it?
Why didn't I taste it?
You'll have time
Because you're gonna die.

Yes it's gonna happen because it's happened to a lot of people I know
My mother, my father, my loves
The president, the kings and the pope
They all had hope

And they muttered just before they went
Maybe, I won't let go
Live life like you're gonna die
Because you are

Maybe you won't suffer maybe it's quick
But you'll have time to think
Why did I waste it?
Why didn't I taste it?
You'll have time
'Cause you're gonna die

There's more but I don't want you to get bored. What was making me think about this song was that I haven't been able to take my second anti-d for the last couple of days for various reasons and boy, am I feeling the effects. Lethargy, confusion, I feel like I'm thinking through treacle if you know what I mean. My memory is shot too. This is how I was feeling before I started taking the second one on top. It got me thinking about what a funny old thing the brain is and how the odd chemical here and there can make so much difference. It also reminded me that getting better is only the beginning of the end and I still have the long cut-down period to get through. But once I get to the end of it and once I have cut down there is a whole big future out there waiting for me.

Current medical thinking is that it is not wise to get pregnant while taking prozac. Bit of a no brainer some might think but there is research suggesting it adversely effects the brain chemicals in the baby. At one point they thought you should leave it for two years after stopping but this has been shorted to one cycle. I'm not gagging to have kids but that bint at work asking me whether I was pregnant did get me thinking about the whole thing. The idea no longer repels me anyway.

In knitting news am still banging away at the ghastly xmas knitting. Ghastly. Soon be over. Am also gearing up for the in-laws visiting this weekend which means a visit to 'Sound of Music' starring the people's choice woman who I think is called Carrie. Means I won't be blogging much towards the end of the week.

Right, back to the ghastly knitting....
Posted by littlelixie at 7:01 pm 3 comments: Links to this post

Moo is home and has brought donuts!

What Donut Are You?
Posted by littlelixie at 6:46 pm No comments: Links to this post

Email ThisBlogThis!Share to TwitterShare to FacebookShare to Pinterest
*sigh* another load of no-sends on swap-bot.com. I am so disillusioned with that site although I have done a lot of good swapping on it. It is just so dispiriting when you make something, like a handknit dishcloth, and then get nothing back. I have just signed out of all the swaps that hadn’t started yet and will just slog through the ones I have left and then leave it entirely with atcards.com and the eclectic ATC Yahoo group. Maybe.

I have this internal conflict going on at the moment concerning the throny issue of organisation. As much as it may seem to conflict with my whole life I would really like to be organised. I am always writing lists but then tend to lose them or at least lose interest. The area of swaps is another one where I really want to be organised but am just not getting there. I have an excel file on my PDA but I keep forgetting it. Then I started another list in my notebook but keep forgetting about it. Then I tried writing it down but the paper wasn’t wide enough. My latest decision is to go back to the paper route but (and this is the big BUT {dissimilar to my big ol’butt}) I am going to do it landscape on coloured paper.

I had to break the paragraph there to leave room for the hushed she’s-a’fricking-genius type silence that just happened there. Who’d have seen that one coming?

The Pooch forms one corner of an uneasy triangle in my life at the moment, the other two corners being me and my muvver. Mumsy has asked that the cottage be a laptop free zone at xmas (we are going down to her this year) and Pooch has taken this rather personally. I spoke to Mum about it this morning and she has taken his taking it personally rather personally. Her argument is that it is antisocial. Pooch’s argument is that he wouldn’t dream of asking her not to bring a book or me to bring my knitting. My compromise is that the laptop stays elsewhere for xmas day and is then optional on other days. My argument is also that by his very nature Pooch = antisocial so you can either have him sitting in a corner glowering at the laptop screen or just sitting in a corner glowering. He looks as cute either way although the light from the laptop gives him a kind of ethereal anti-halo which does something for his image although I’m not sure what. All this calls for another entry from the kennel.

(Big Brother announcer’s voiceover…..)
Day 2 in the Pooch Kennel
Set alarm for 6.40am then objected loudly when Byrne got up at 7 and wanted to turn the light on. Even though she brought me a cup of tea I still loathe her. After she had left drank tea with sulky expression on face while counting ways to bring about her downfall. Got up and rearranged two bottles of wine in my 56 bottle winerack. Made my winerack some tea but it didn’t want it so I drank it.

Last night spent some time enumerating the number of meanings of the word ‘Byrne’.

Me & my winerack have some tea

Posted by littlelixie at 1:55 pm 6 comments: Links to this post

Do you know how much knitting I have to do? God damn christmas. Bah humbug! I am also somewhat preoccupied with the memory of how much time the MBA is going to take up when it starts again in May. I have to learn to really make the most of all the time I DO have. Which includes no more xmas knitting. NO MORE. But it's a bit late now. Oh poo.

Have been thinking for some time that Pooch should have a blog to put across his side of things. I wanted to call it Pooch's kennel but he has steadfastly refused to do one and this afternoon officially trademarked his name meaning I can't use it at all. So I have decided to have Pooch's blog as a subset of this one. So here follows the first entry of Pooch's kennel

Sunday 3rd in the Kennel
Got up today and drank a lot of tea. Then went back to bed with tea and my laptop. Did you know that the ATG couldn't find the SPU input with their elbows? Spent 3 hours on wikipedia reading about code breaking, mafia bosses with funny names and crocodiles while drinking tea. Surprisingly little overlap. Byrne bought me a winerack. About time since I've been asking for one for more than a year. She had to put it together because I'm too disco-ordinated. Yay, disco! Let's dance like Bez from the Happy Mondays. And drink tea! 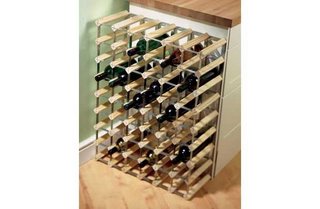 My Winerack
(except mine only has two bottles in and I officially give Byrne permission to keep her shoes in the rest of the spaces. This is official because it is on my blog.)

So apart from that there is not much else to say and still can't post any pics as is all too sensitive. Oh except.... 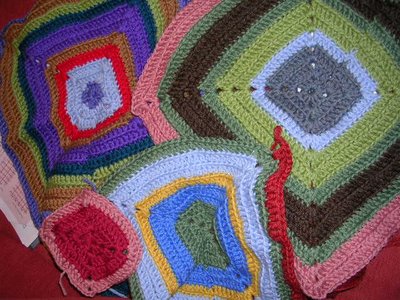 These are are just some of the squares I've been crocheting in my spare moments. It's a humungous blanket from the interweave crochet mag my SP bought me oh so long ago. I'm really enjoying it actually. And I like the modular nature which means I can just do a little bit at a time but see how it is building to make the whole. Which brings me on to the subject that is never that far from my mind.

I had my appraisal last week and was talking to sean about my feeling of isolation in my role and what I think I have realised over the last couple of days is that it's something that isn't going to change and as I'm not working closely with anyone I'm the only one who's going to notice what I do achieve. And I'm not going to notice unless I define the signposts or whatever they call them. Tomorrow I'm going to go into work and use the wonderful MS Project for something other than ATCs. Maybe.
Posted by littlelixie at 7:36 pm No comments: Links to this post