When I got to work this morning I got called into a photo shoot for our Events business's new brochure. Being sober and upstanding I got to stand at the front behind a lecturn and pretend to lecture. Except I saw no point in pretence and decided to go for it. My homily (sp?) covered many subjects including

It worries me that there are some people out there who do not know about his holiness, the FSM. Here he is: 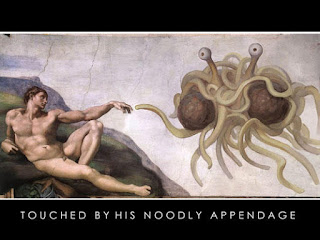 I know. He's breathtaking. I have asked Pooch for the gospel of the FSM for xmas. I love him, and Pooch, and want to be touched by his noodly appendage, and the FSG's fnah fnah. I feel it is important that anyone who has heard about Creationism should also read about Pastafarianism.

Incidentally my colleagues already think I'm nuts so were not surprised at any of the above topics.

Just before I go - is the word 'bodkin' really in such decline? Even women in their 50s claim not to know of the word. I feel like it was one of my first 10 words like dada or potty. Reassure me here - others do know of and use it don't they? What else would one sew up seams with?

Posted by littlelixie at 4:20 pm 8 comments: Links to this post

Where do these things start?

Yourself: Ditzy
Your boyfriend: Pooch
Your hair: awful
Your mother: Bookish
Your father: Distant
Your favorite Item: Chocolate
Your dream last night: absent
Your favorite drink: chocolate
Your dream car: red
The room you are in: impersonal
Your ex: numbered
Your fear: madness
What you want to be in 10 years? Poochetta
Who you hung out with last night? Pooch
What you're not: Unhungry
Muffins: chocolate
One of your wish list items: wool
Time: lacking
The last thing you did: kiss
What you are wearing: cords
Your favorite weather: rain
Your favorite book: Freakonomics
The last thing you ate: cherry!
Your life: patchy
Your mood: sleepy
Your best friend: Louise xxx
What are you thinking about right now? dinner
Your car: none
What are you doing at this moment: hungering
Your summer: warm
Your relationship status: dreamy
What is on your TV? nothing
What is the weather like? windy
When is the last time you laughed? just now
Who do you tag? anyone?
Posted by littlelixie at 7:14 pm No comments: Links to this post

I made that the title as there must be something to celebrate in this otherwise most unlovely of Tuesdays. Those masochists among you who have been checking in for some time now may have heard me mention the film "Zoolander" once or twice. There is a point in that film where Hansel (Owen Wilson) is telling a story to a group of himilayan pygmies while baking bread. It goes something like this....

"So I'm free-basing down this mountain in the alps and all of a sudden I feel the snow slide under me and I'm like 'oh no' and suddenly I'm falling and I'm falling through the air waving my arms and screaming 'aaaaarrrgggghhhhhh'.... when all of a sudden I'm like.... 'Hansel? Haven't you been smoking Peyote for 6 straight days? And isn't it possible this all a hallucination? And you know what?..........It was! I was in Utah. I've never even been to the alps!'

From which story you will of course guess that it was only at the end of the day that I remembered I have PMT. Everything was fine up to when I got back from lunch and so to say it was an awful 'day' is taking it a bit far. It was more like an awful 2 hours which may run into tomorrow a bit but frankly who gives a shit.

Hoorah, hoorah, for I am not mad!

Had a day off yesterday and spent it putting in hard graft on xmas presents. And also putting in some serious cherry consuming too. Here are the two combined in my effort to be a bit yarnstorm-ish. 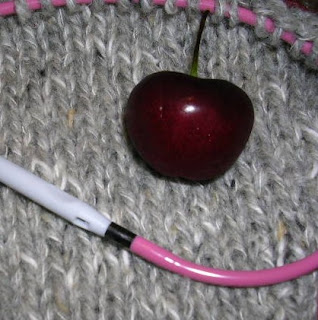 Aren't cherries fabulous? And don't they just taste great? You know, I didn't even like cherries until about September. Now I can't get enough of them. 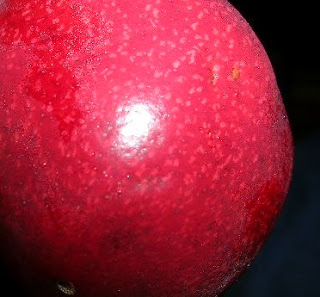 You'll also see my beautiful pink denise cables in the photo above which are an early xmas present from The Pooch via Woolly Workshop. They remind me of just how much I totally adore my denise needles. I was further reminded of this when my blog went awol when I switched to blogger beta at the weekend. About 2 days it was missing for - rather annoying. When it came back all the info from the sidebar had gone so I had to look on google for a cache'd one and it came up with this. They really are so good. I have the plymouth bamboo interchangables and frankly they are not up to much. Fine to knit with - in fact divine to knit with - but not enough cables for a multi knitter such as me. 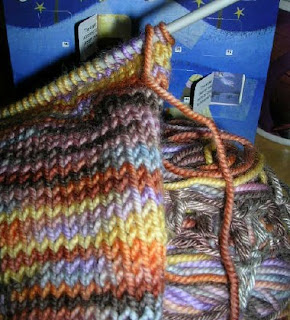 Here is a kind of knitting themed post of what I shall be knitting first once I get the xmas ghastlies off the needles. It's the socks that rock yarn I got in a swapbot swap. Aaaaahhhhh, lovely yarn.....beautiful yarn.....lovely yarn. Soon I will come back to you my pretty....

Ok. That's enough time off the ghastly knitting. All that remains is for me to insert a quick political spot...

[Ding, Dong, Pinochet is dead - hoorah hoorah may he believe in hell so he can rot there]*

....and to apologise for the lack of a report from Pooch's Kennel. He seems to be enjoying the attention too much so I'm going to suspend it for now.

*My revised religious beliefs still maintain that I can spell the 'r' word wrongly and have been updated to include a bit about how if you believe in heaven or hell you might end up going there. But if you believe that when you die that's it then that's what you get too.
Posted by littlelixie at 5:49 pm 1 comment: Links to this post