TV to Knit Things By

I do a lot of knitting while watching episodic crime series. A number of these are American but regardless of who made them I am always on the lookout for new ones so leave a comment if I've missed a good one. I acquire these episodes in a way that pater, as a solicitor, would not approve of but they are generally available on services like netflix or sky+ and so on. I'll go for alphabetical order.

No list like this could be complete without these three - that is CSI, CSI:Miami and CSI: New York. I've watched both of the others but cannot stand Horatio on Miami and got sick of New York so I'm back with the original. I almost baulked when Ted Danson - with hair as white as his teeth - popped up as the head of lab (for those a few series behind Grissom is gone but oft referred to). But it's turned out even though they've robbed his character of the quirks it had when he first joined. CSI is up to its 13th series so if by any chance you haven't seen a hundred episodes of this already and like the idea of quasi forensic science solving the crime you've got plenty to keep you busy.

Grimm
It's not often you get a new take on the "man with X problem/issue/history solves crimes using Y technique aided by his sidekick who has Z problem/issue/history". Guy finding out he's one of the keepers of the peace type people for a whole parallel human species who relate to animals and ancient german fairytales is a pretty good one. It's actually a lot more complicated than that and they did some good stuff towards the end of the first series which means the second one hasn't just been a repetition. My favourite character is Monroe who is actually a werewolf kind of person but helps Nick out solving the crimes using his insights into the world of the Grimms and knowledge of Grimm folklore. He fixes clocks too and does pilates.

I'm serious - they remade it. I believe we're even on series 3. It's kind of like they took Magnum, shaved him, made him a bit more military, lengthened his shorts, and put him in charge of a special police taskforce with unlimited budget and no HR department. There's no shortage of wet t-shirts and beachwear here. Although it is all quite amazingly unsexy. This is something I watch to be amused at how retarded the latest plot twist is. As a hint, we're currently up to his mum not being dead and having been such a good secret agent that she's stayed hidden for twenty years in a hut in vietnam or something. We've also finally found out why Danny doesn't like the ocean. It's hard to believe it's taken then this long to think up that lame arse reason but there you go.

It's unusual for a british crime drama to generate a spin off. I think. But none have been more deserving than the long-suffering Lewis, sidekick of Morse. "Poor Lewis" easily replaces "poor Morse" in these modern day stories and the addition of Laurence Fox as Sergeant Hathaway was a welcome bonus. He does occasionally get wet but only when wearing very opaque clothes. Shame really. They are pretty much as good as Morse although the continuous rumblings about both their love lives are a bit wearing. 90 min episodes with some juicy murders and interesting storylines. Seems they are about to film the final series and I can't see a "Hathaway" filling our screens in ten years. Shame but life moves on.

This was so good. I was gutted when they axed it. Tim Roth was awesome and undoubtedly brought the word "wanker" so a new generation of americans. He was actually english in this which apparently confused a lot of them who thought he was american. Based on real psychological research into micro-expressions which is fascinating in itself. There's a daughter who skillfully avoids being annoying and a good sprinkling of rumpy. The crimes are varied - certainly not always murder - and interesting. Good acting all round. Definitely to be recommended.

A rare Australian entry on to the list but don't start thinking about Neighbours. Set in the twenties (?) our heroine (I am Miss Fisher. Yes I am) returns to Australia having come into an income that allows her to keep a house and servants. With these and her friends she sets about righting all sorts of wrongs including the murder of her own little sister when they were children. The settings are perfect and the wardrobe is *divine*. A second series has been commissioned and is eagerly awaited. 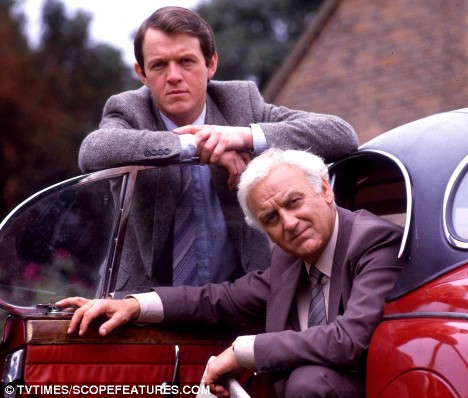 Do I even need to say anything? This is an amazing series of quality dramas from start to finish. I guess some non-UK readers might not know them too well and let's not forget they are now a little dated but still - Morse nailed it. In many ways, and I don't say this lightly, they're better than Colin Dexter's books. Each one is about 2 hours long and deal with serious issues but with a delicacy that reflects the time (the eighties) where no one ever dreamed of swearing on TV.

If I had to pick just one from this list it would be this one. Angela Lansbury is a god. Jessica Fletcher is a close second. I adore the corny stories, the endless friends Jessica has around the world, the way any relative of hers is accused of murder, the times she pretends to be drunk. I love it all.

NCIS
Ah, Mark Harmon. You grey haired love god. He was my first older man crush and in fact my only one so far, apart from Pooch. He plays Gibbs, former Marine and now head of the navy crime service. This one was a spin off from a spin off from CSI. The original spin off, JAGS, didn't last (and was pants) but the spin off from that did. Yay. NCIS is now on its tenth series so if you like CSI but think it doesn't have enough american navy politics in it you'll love this. I lost interest when they brought in this dappy woman as Gibbs' boss (and of course they were ex lovers) but once they brought in whatshisface, the current one, I was back in the game. I should point out Gibbs never takes his t-shirt off. But you wouldn't expect him to. You respect him too much for that.

NCIS: Los Angeles
I've put this as a separate one just because it is SO different from NCIS. You can see the link but it vanishes after that. Let me explain - it has LL Cool J in it. That's basically enough. But it also has Chris O'Donnell (think Robin from Batman and Robin when the Batman films were realllllly bad) and a woman called Hetty as the boss who is about 4 feet tall and kickass. This is the secret agent part of NCIS so there are lots of mentions of "getmo" (Guantanamo) and people going undercover. LLCool J wrote the theme tune, sings the theme tune. And there his similarities to Dennis Waterman end. If you wish NCIS or CSI were less sciencey but had more gadgets, car chases and unresolved sexual tension then this is your bag.

A newish addition to the genre but very much in the "Lie to Me" stable. The guy from Will and Grace is a schizophrenic neurosomething professor at some american uni who has a lot of hallucinations. The FBI call him in and a different hallucination each week generally pops up to help him quiz his subconscious on how to solve the crime. Obviously. I was a bit wary of this format because being a mental myself I'm always suspicious of how they're going to be portrayed on screen. Bonus points though for the mentaler to be solving the crimes rather than committing them although of course a number of those involved do end up being ill. The first series finished earlier this year and a second is commissioned. Worth a look if you've already seen Lie to Me but be warned, Will does not take his shirt off once.

Awesome, awesome, awesome. British TV at its absolute best. Brenda Blethyn is genius as the fifty year old in charge of the murder squad with a young male sidekick. She's got parent issues, eats worse than any student, is overweight and unfit. The episodes are about 90-120 mins long and heavyweight issues are dealt with. The filming is a lot like the Branagh Wallander with gloom and blue filters on things. Really excellent TV.

I'm sure I have forgotten a few (some, like Columbo, are deliberate) but leave a comment to let me know if I'm missing anything good.
Posted by littlelixie at 5:49 pm 5 comments: Links to this post

There's five of them. They're mental. The ones I refer to are real and distinctly non chocolatey. They love lettuce. Who loves lettuce? Cocktails, yeah, But lettuce? I found myself talking to them within minutes of arriving. AND I'm carrying the cat past them because the cat...the predatory if-it-bleeds-i-can-eat-it hunter...is scared of them. I let her out and she bounded through the door and executed what I swear was a complicated salsa move to redirect by 90 degrees without losing speed in order to avoid them. I swore I wouldn't do that. Ha. But then who knew the cat was a chicken.

Posted by littlelixie at 5:24 pm No comments: Links to this post