When Pooch told me there was a cat cafe within 10 minutes walk of our flat I was a bit skeptical. My experiences at the Ikebukero cafe had shown that these cafes could be pretty variable plus his idea of 10 minutes walk is very different to mine. So when I hopped on the bus for 15 minutes to get there I was playing it cool. 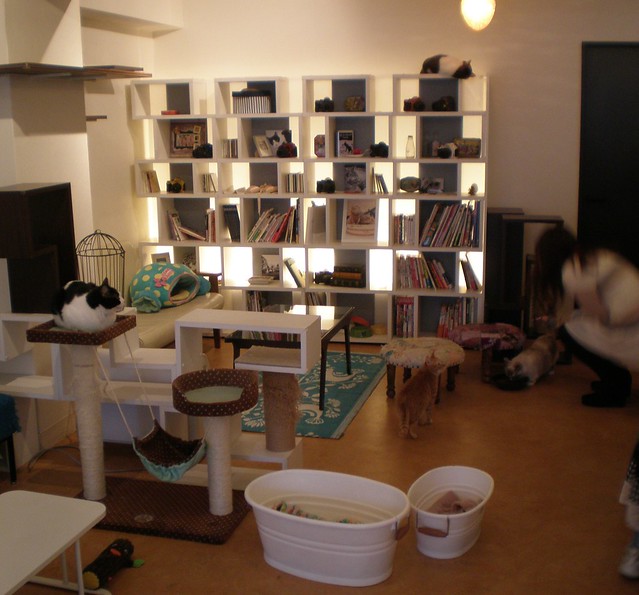 In size it is about half the size of Calico in Shinjuku with the above at one end of the single room and a wall of windows with more seating and cat beds at the other end. The cats can also get completely away from visitors off to the right of the above picture if they want to. There were about 12 cats all together with these two winning 'most adorable couple'. 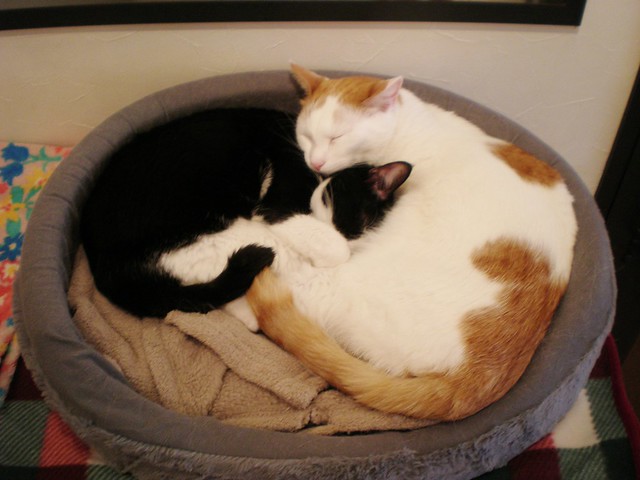 There was quite a lot of friendliness in evidence. 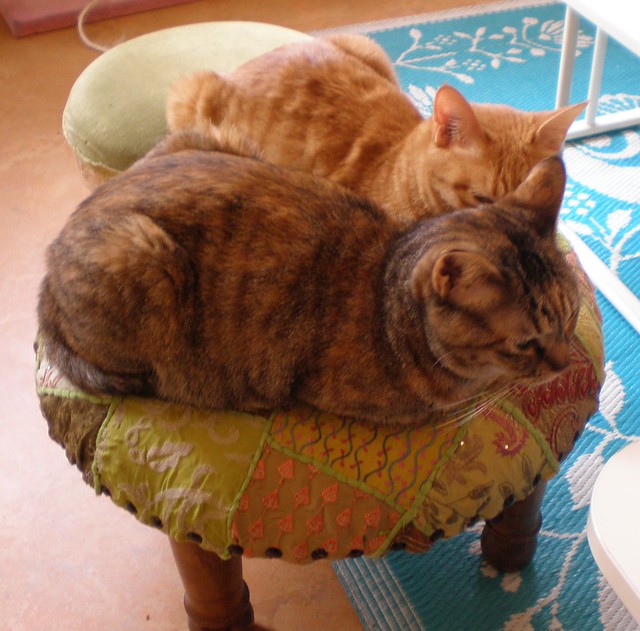 The guys below were funny. The cat on the right was there first and the one on the left basically sat down and wriggled about til he/she was comfy. 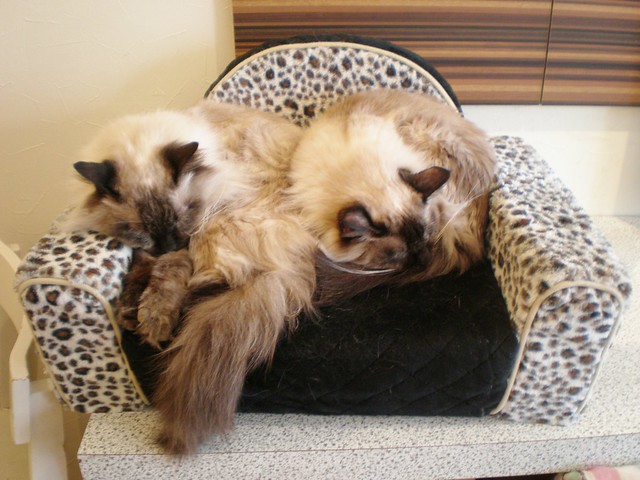 It's not like there was a shortage of beds either - they just seemed to enjoy doubling up. You can't tell from the photos but they both had amazing eyes - like old fashioned clear glass marbles but one with blue centres and one with green. It was very striking.

There was also politics. The occasional tricky pass to be negotiated on the high levels... 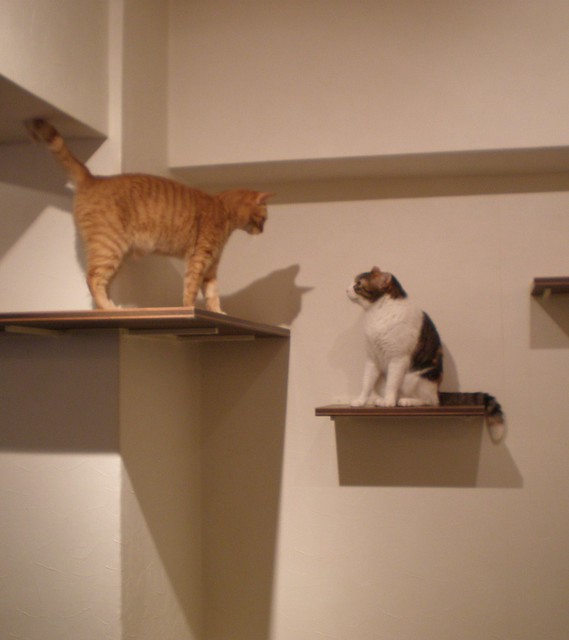 And then there was Bruiser. 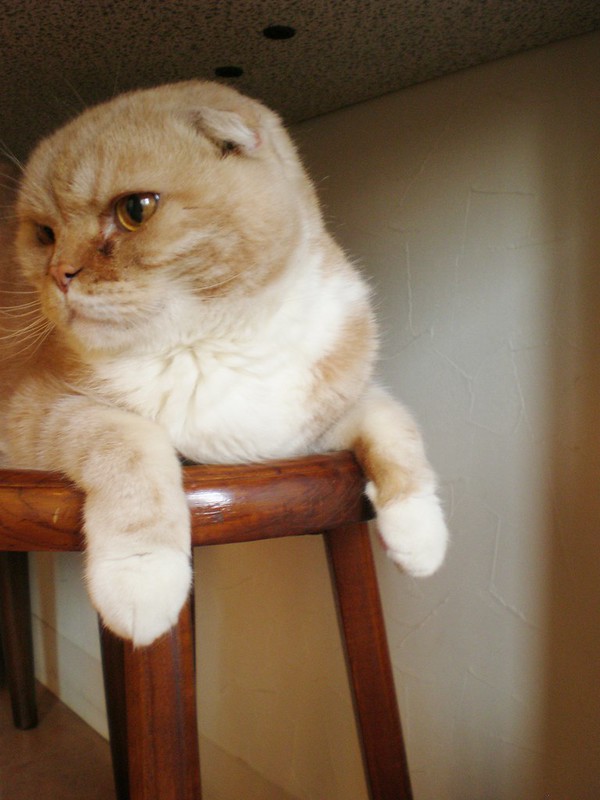 I thought he looked very sweet at first, then I saw his face. Even with the scottish fold breed ears this was clearly not a cat to mess with! He swaggered up and down the room with his shoulder muscles rolling and swatted at any cat that hadn't already got out of his way. 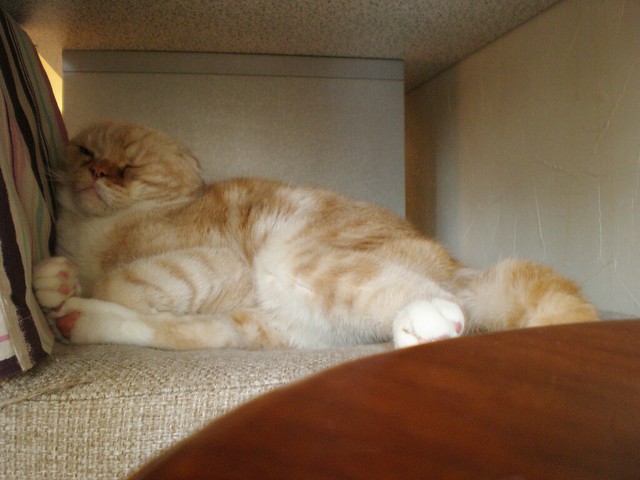 He wasn't above a bit of stroking but not until he'd put on a boxing show. But seriously - how can you be intimidated by a pussycat with pads on his feet that pink! It was like Barbie had a cat habit and this was him.

One other notable resident was this guy who was amazing to look at. 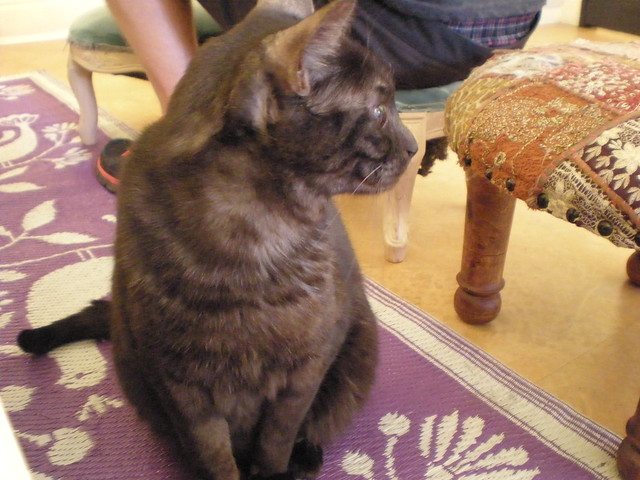 He was charcoal coloured but when you looked at the fur closer to his body it was pretty much white - so when he moved you got these lines of grey and white appearing. Plus if you look closely he's got an almost bengal type pattern of stripes in his fur. Very special. (All my photos are rather blurry because I had the flash turned off.)

All in all it was a good way to spend an hour but I've been spoiled by Calico Cat Cafe. Even when this little guy decided to sit under me when I crouched down to take a photo... 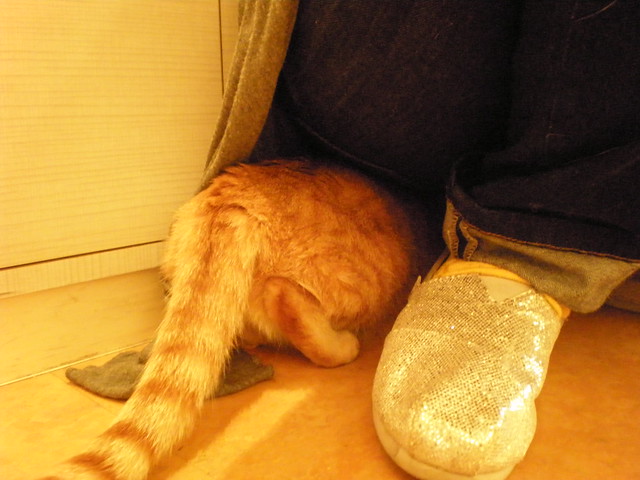 ...it didn't change my mind. It may be twice the distance but I'll still be heading back to Shinjuku for my cat fix in future.

The "most adorable couple" looks like the yin/yang thing. :-)