Too Hot to Handle

I am melting. You see this: 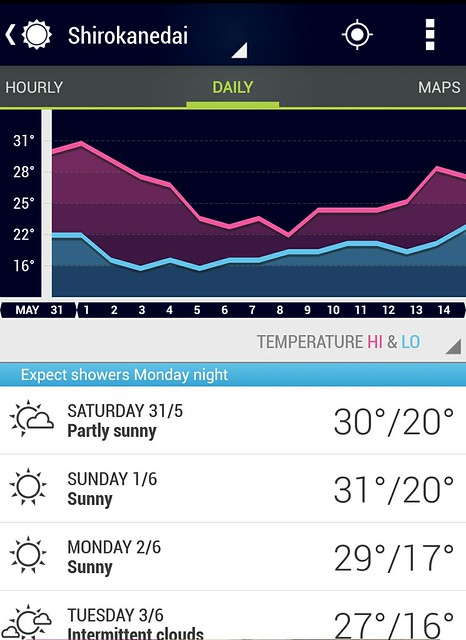 Screenshot from my phone. Last night's "low" was 20 degrees. 20! That would be a nice "high" temperature in London. And the humidity isn't even that high yet. I may actually expire. Or just melt like that hard done by witch in Alice in Wonderland. Or the Wizard of Oz. Whatever. Too hot. My sister screeched at my complaining on Skype yesterday when I said I didn't feel it appropriate to put the air conditioning on yet. I'm British! We didn't conquer and downtread large parts of the world with air conditioning. We did it wearing flannel vests. So I'll just sit here and complain instead.

All this sun avoidance has given me a lot of sewing time so I have been getting on nicely with the voodoo doll of my sister, eventually to be given to my niece. She has a face. 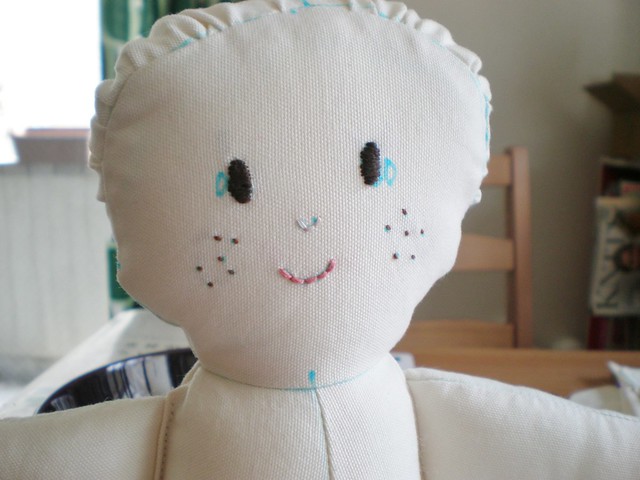 The blue pen vanishes in water. She now has hair. 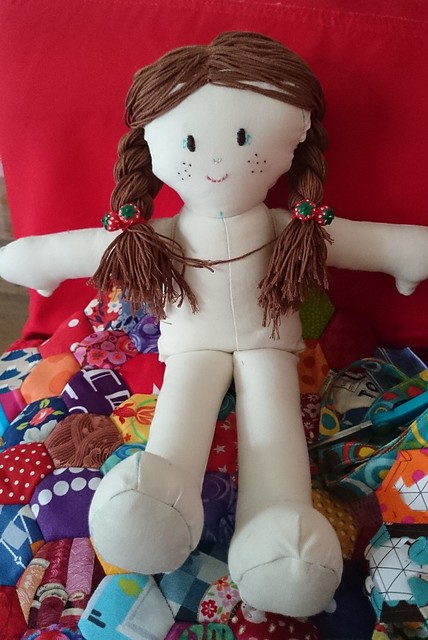 Before she even had hair she had her first outfit. 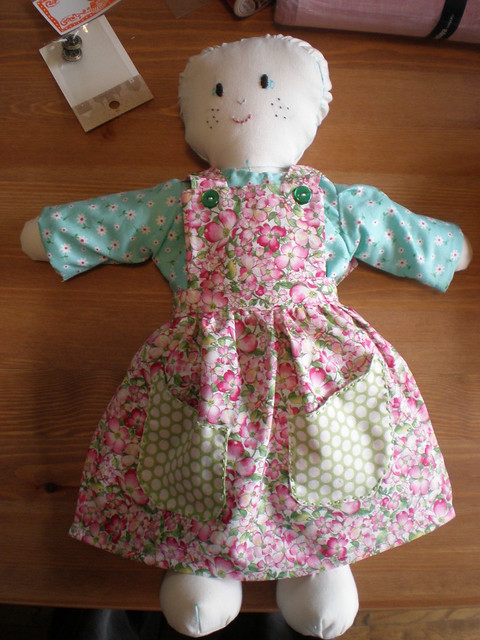 I feared the dress looked a bit too much like a hospital gown so added an elasticated waist and some pom pom edging around the collar. 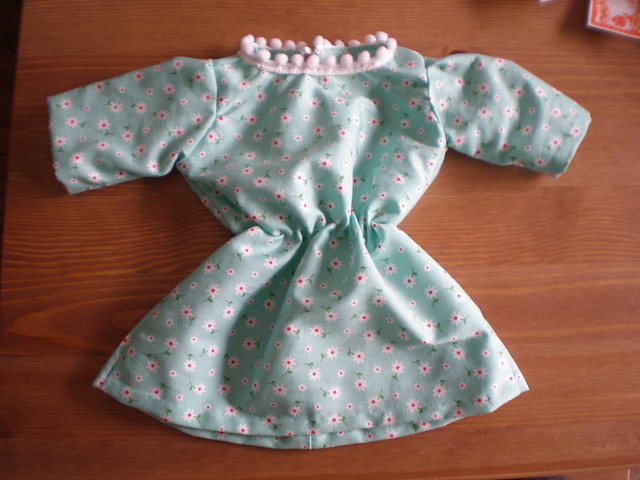 All patterns have come from this book: 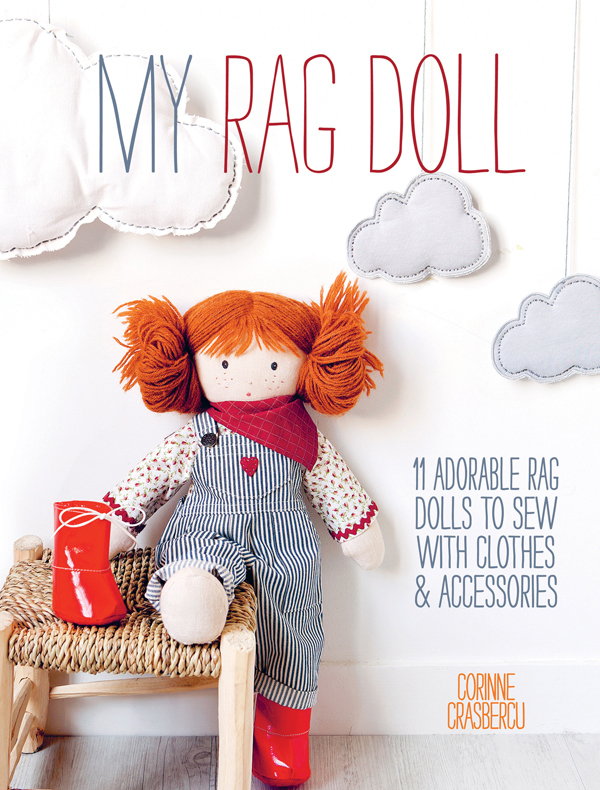 ...which you can buy here (no affiliation) or on Amazon. You can also buy e-patterns individually. I've submitted a review to the site but I don;t know if they'll publish it. Essentially this is a wonderful book if you know how to sew garments. If you are a beginner or inexperienced sewer you'll have no trouble with the doll but some of the garments have steps missing, presumably to make the text fit the template. These don't matter so much if you know the basics of what you're doing but to a beginner they might be rather disheartening. If you can sew and want a handmade doll with a handmade wardrobe then this is 100% the book for you.

I was shopping for bits for the outfits when I met up with Natalie from The Yarn Yard on Monday. We had a lovely time shopping at two of the largest craft shops in Shinjuku - Yuzawaya and Okadaya. I picked up red pleather for the doll's rain boots, denim for her dungarees and oil cloth for her rain coat, as well as a variety of trimmings. 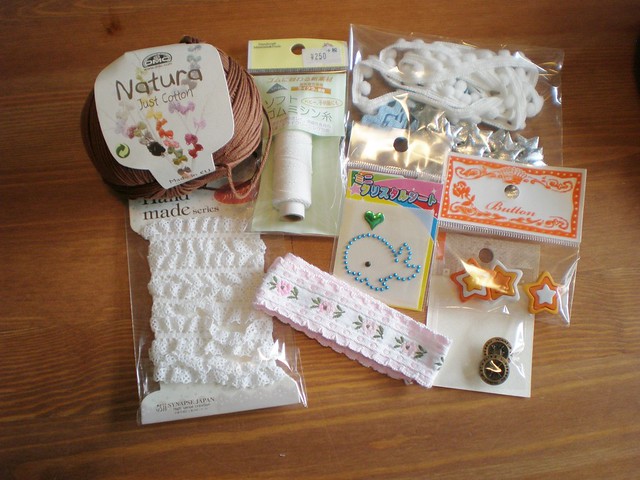 We had lunch at a Choco Cro although we were very restrained and had a savoury. This is an actual Choco Cro which I picked up yesterday and managed not to eat until I got home. 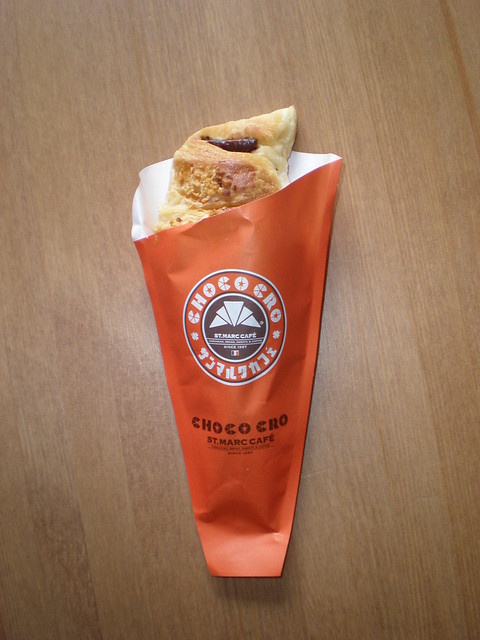 It's a small, straight croissant cone filled with nutella consistency chocolate goo, although without the hazelnut. They are rather nice and seem to go down a storm here.

I have a few more posts to catch up with since it's too hot (did I mention it's hot) to have my laptop on all the time. Poor thing keeps overheating. As, in case I haven't mentioned it, do I. 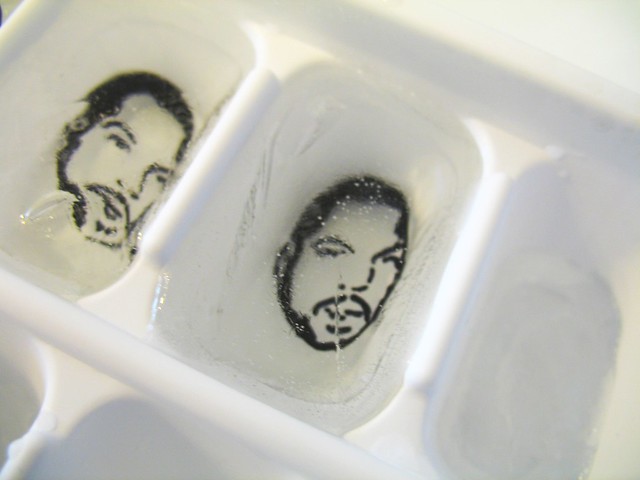 Posted by littlelixie at 3:33 am No comments: Links to this post

I imagine all tourists go to Shibuya at some point since it is extremely japanese. There are dolly girls dressed up as dolls at 109 which is a huge clothes shop for teenage women, with another one for men nearby. There are huge Pachinko parlours full of very loud noise and tinging of bells and balls. There are department stores, cinemas, a huge Tokyo Hands (a kind of John Lewis) and umpteen other things. There is also the Shibuya Scramble - said to be the busiest crossing in the world. Apparently up to 3,500 people cross at peak times. And since peak times are 8am to 10pm that means most of the time.

I was there on Friday night to see Captain America 2 at the cinema. This is a small part of the crossing (which goes at least 16 different ways across, I think, 6 different roads at a junction) while people are starting to gather ready for when the lights change. 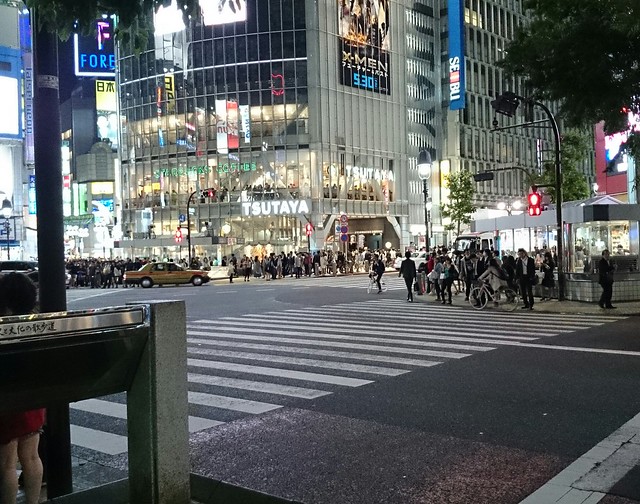 >
Just as they start to cross. 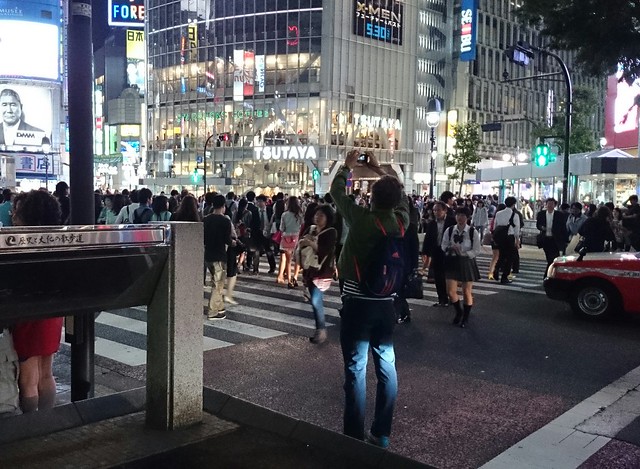 Much better photo than mine via creative commons licensing. 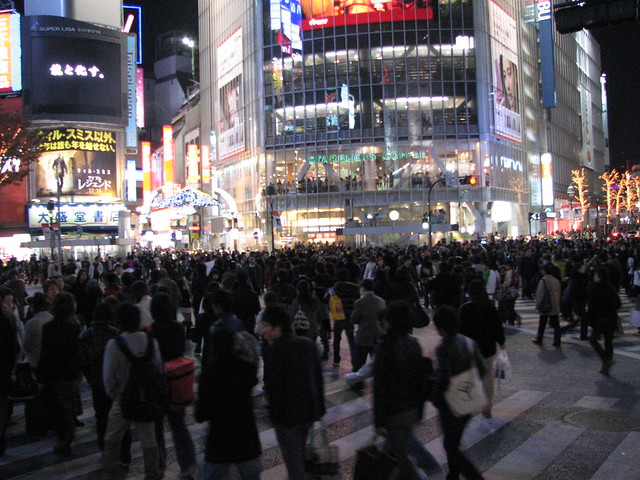 If you've seen oxford circus on christmas eve or been leaving Wembley at the end of a match you might think that would compare to the mass of people but it doesn't quite come close. You add in the noise from all the neon screens (unlike somewhere like Piccadilly circus they're all playing music/talking at the same time) and the light pollution from all the signs plus any smells from nearby restaurants and food carts and it is quite uniquely Japanese.

One thing that does seem universal though is buskers. 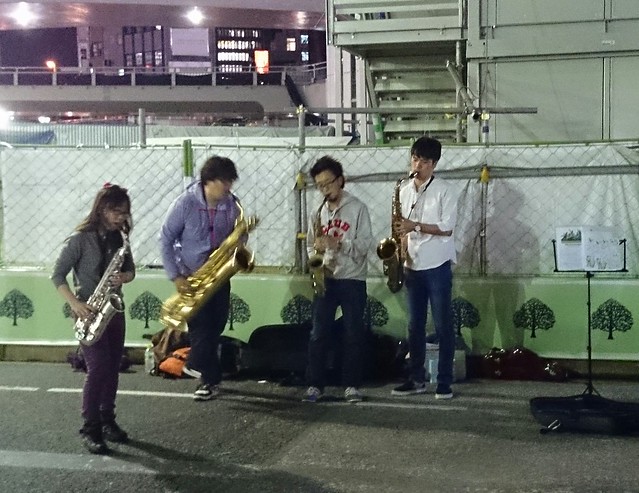 This quartet were playing some big band tunes from the fifties and the small girl on the left was doing all the swing moves and clearly calling the shots, backed up by the three larger guys.

However busy it gets I've always felt safe in Tokyo. I have been very used to a busy London, having lived there for 16 years now, but there you always kept in mind that there were pickpockets and muggers about. Here, there genuinely doesn't seem to be that problem. Plus if you get some tall Gaijin like me (5'7") sitting in front of you at the cinema, you can always take one of these cushions to give you a boost. 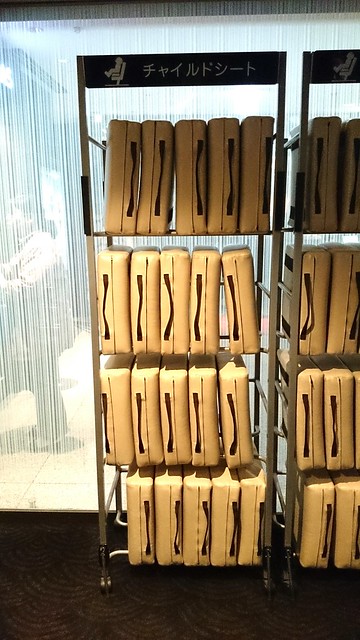 My review of Captain America 2? Pretty good stuff. It ties in with "Marvel Agents of Shield" the TV series which I was totally hooked on for the last few months and so added some extra clarification to the rise of Hydra (Hail Hydra! except not really). Scarlet Johannsen was the Black Widow again and I thought they were setting her up to have a huge crush on Cap but it didn't go anywhere - I think maybe they're working towards him being gay. 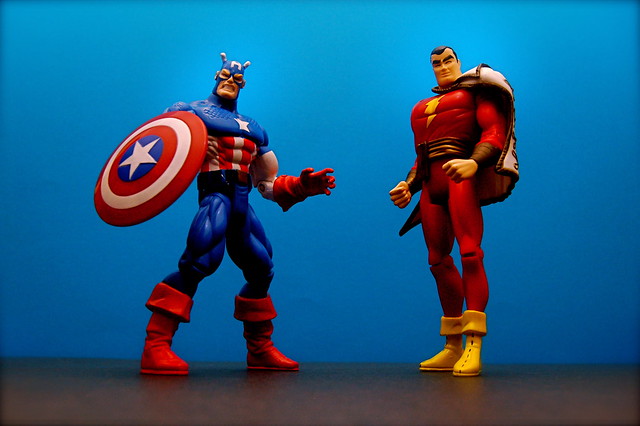 Not really but wouldn't that give the free world a funny moment. She was a lot more animated than usual (she's been so bland in everything I've seen her in I don't get her popularity, apart from "that photo" of her bum of course) although the make up department seemed to have given her this weird tango tan to go with her orange hair. It really didn't suit her but then who am I to judge considering I don't tan at all.

Pooch mentioned yesterday that young japanese women have a fear of getting freckles in the sun, hence their extensive use of parasols and finger to shoulder UV gloves. Since I am now sporting my full summer allocation of the good stuff I can only imagine they look on me with great sympathy. 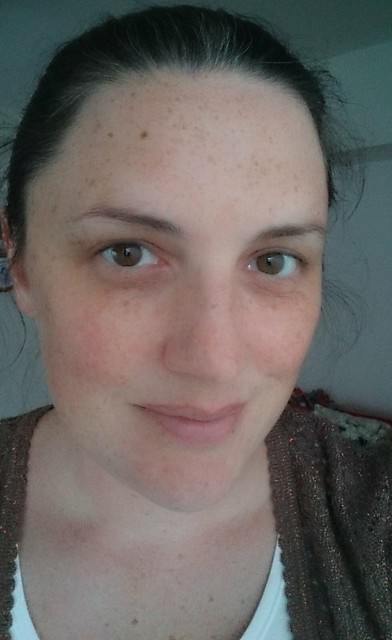 Or possibly fear. Pooch meanwhile has a fairly decent tan and has developed what he calls "Wayne Rooney freckles" on his arms claiming that they look like the ones on Rooney's forehead. Since I refuse to have his name on my search history I have no idea what he is talking about, but he does seem quite downcast about it. Poor Pooch.

How I Ended Up Following 113 Blogs

The dangers of Bloglovin - I seem to have ended up following (and keeping up with) 113 different blogs. It's all too easy to click that "follow me on bloglovin" button when I come across an interesting post or to add the url into bloglovin itself and click "follow". The app means I tend to read posts when I am on the metro since the whole underground system in Tokyo has a 3G signal (as far as I can tell).

There are some blogs I have been following for years. Nickerjac, Knitting on the Green, Six Skeins Under, Jane's Probably Knitting and A Dress a Day are all old favourites while others, like Barbara Brackman's historic quilts site or Supergoof who blogs in (I think) Dutch, are ones I've come across through Pinterest or bloghops. Foreign language blogs are no issue since I use Chrome and therefore google translate pops up offering to help whenever I look at them.

However I found them, the full list of 113 is below (and I see it includes my own, which naturally I never miss a post on). The links go to Bloglovin (since that is the only way I could export them) but then you do have a direct link to the actual blog on that page plus a snapshot of the most recent posts. I've put a plus (+) next to the ones I can distrinactly remember reading good posts on recently. I'm sure some are not being kept up to date but then that is something google reader did which bloglovin doesn't - tell you the date of the last post.

Posted by Lixie at 8:40 am No comments: Links to this post