I am not a big drinker, and before I came to Japan I had only had sake (pronounced sar-kay) hot. Over here there are Tabehoudai restaurants where you pay to go for, say, 90 minutes and during that time you can eat as many things on skewers as you want and also drink beer or sake to a reasonable extent along with it. Not drinking beer, the first time I went I opted for sake and it was served ice cold. Suddenly, I was liking sake a whole lot more. This discovery ultimately led to yesterday's outing to Nihon-shu, a sake tasting venue near Daimon station. 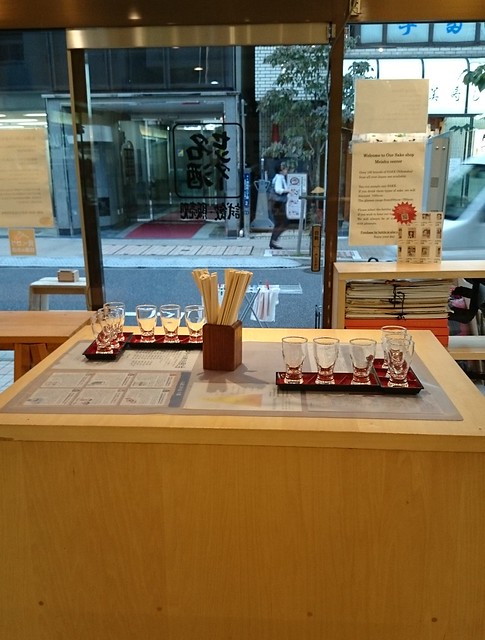 This is the kind of place we don't have in the uk. It was halfway between a bar and an off license, without being remotely like either. We went in and the staff were very nice with enough english to work it all out. You basically choose three bottles from the 100+ in there. Each one has a label in both japanese and english giving the price per glass and per bottle, the acidity, the sake meter reading (basically how sweet or dry it is) the type of sake, the prefecture it was made in and the percentage of polished rice used. You take the bottles back to your spot and the staff pour you a shot glass full of each one (full to the brim, not like an english measure) and you pay before getting down to the tasting. 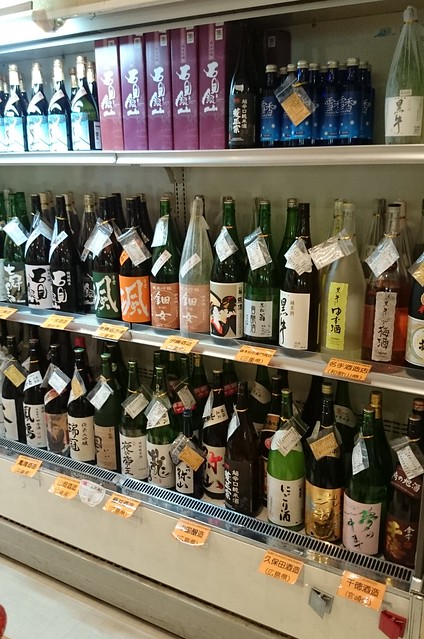 There is absolutely no sales pitch - the staff just pour and go - which was rather nice as it leaves you to chat to whoever you're with. The others there were mostly salary men (office workers) in ones and twos. Most were men but there were a few women. 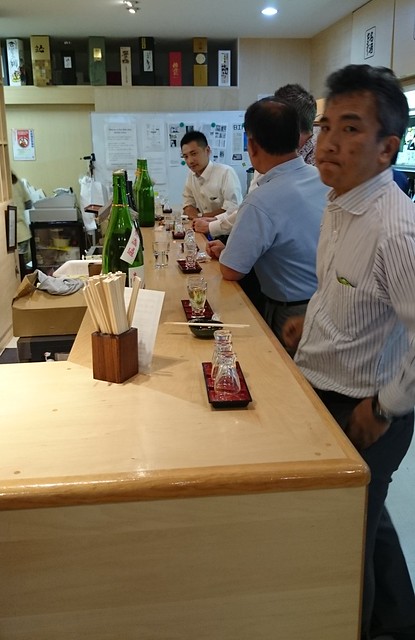 I generally drink the house sake (which there usually is on a restaurant menu along with the house red or white) and had no idea what the different numbers would translate into. So with a fairly random approach we chose three. 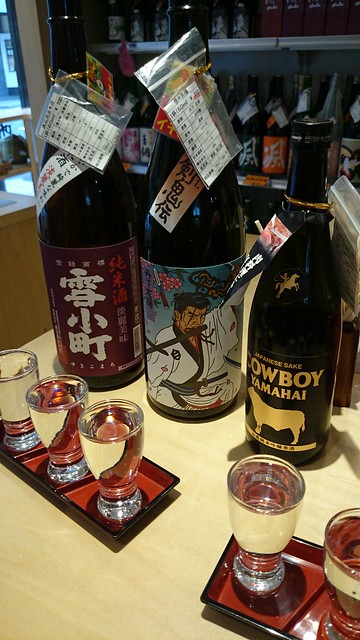 Going from right to left, the Cowboy one was actually divine and we ended up bringing a bottle back with us. The middle one was a lot sweeter which I imagined I would prefer (you know me and sweets) but actually I didn't at all. The final one I found quite bland. Now at this point your intrepid heroine was feeling a little bit light headed. Three glasses of 14-18% sake is as much as I would usually have in an evening and this had taken about quarter of an hour. I was longing for some french bread, or even a slice of mother's pride, but all we could find were rice crackers and some admittedly lovely smoked mackerel, but neither of these are that well known for their absorbant or stomach lining properties. I took a tight hold of myself, and the table, and got ready for round two. 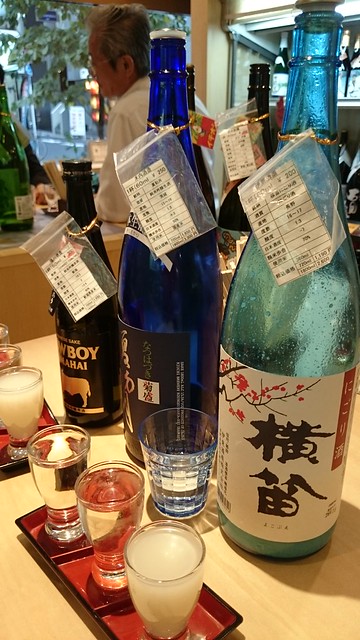 Pooch picked the two blue ones while, after having a good look, I decided to stick with the Cowboy since I really did like it that much. As you can see from the glasses the pale blue one was unfiltered meaning it still had some of the rice's natural starch in it and some bits of rice husk, leaving it looking like watery yoghurt - not exactly attractive and the kind of thing where I needed to be already three sheets to the wind before I tried it. Fortunately I was, so I got stuck in. The consistency was a bit like a watered down fruit smoothie and the taste was actually very mellow, although not something I particularly loved. The middle one was a lot yellower in appearance than those of the first round but still the Cowboy stayed as my favourite.

At this point I was firmly clutching the table with one hand and trying not to drop my rice crackers as six glasses of sake is really not my average night. I was all too aware that I might not be looking as sensible as I had been when I set out. 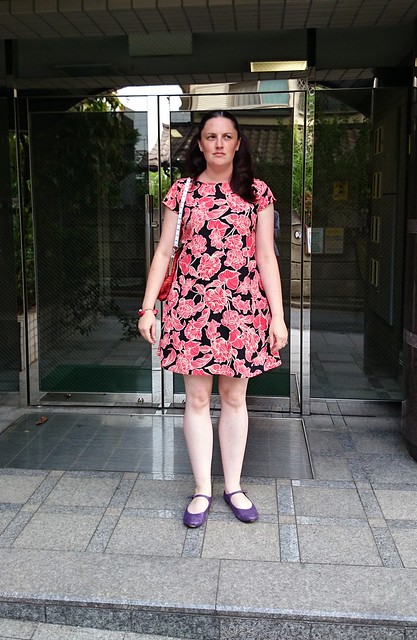 Pooch, however, is Mancunian and made of sterner stuff. Plus he was wearing trousers so no one would see his pants if he fell over. He went in for round three, No photos exist of this third round, of which I have only vague memories, but we still came away with just the Cowboy bottle so I guess none of them grabbed him.

I thought this was a perfect place for an after work drink but not somewhere to plan to spend more than half an hour or so. If you were visiting japan it would be a great way to try some unusual sakes (most were 200-300 per glass so less than £2 but some were more than twice that) and find something you really like. It's a shame that the uk's drinking culture prohibits this kind of place from working there but here it works really well.


Posted by littlelixie at 2:22 am No comments: Links to this post

My original bit of teaching for another organisation didn't work out as no one signed up. I have therefore branched out on my own and created a meetup group called "Tokyo Craft". So far I have listed a tour of the craft shops in Shinjuku, learn to knit, make a kanzashi flower and sashiko for beginners - and I have people signed up for each one! I thought I'd have a practise for the Kanzashi one and whipped up these. 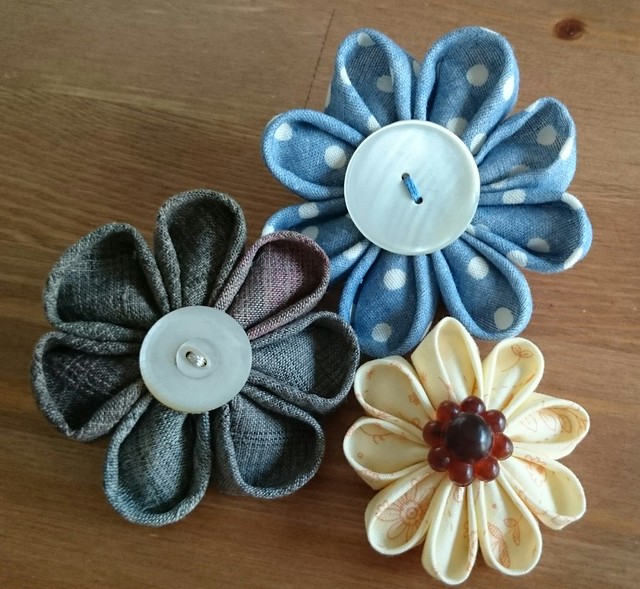 The tweedy one is using traditional japanese fabrics while the other ones are patchwork off cuts. All have vintage button centres. 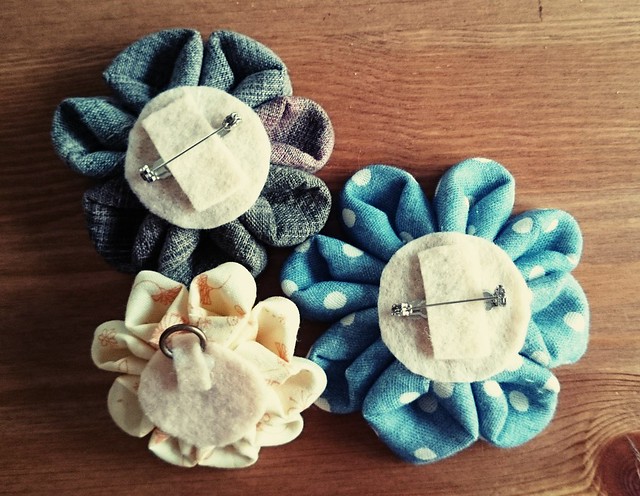 Two brooches and a pendant/charm. Those all use the same petal shape, and the one I think is the prettiest, but I've also been looking at the more delicate ones made differently using satin and silk. There are some beautiful examples and good tutorials on Pinterest. I've collected some here in case anyone wants them.


Posted by littlelixie at 12:25 am 2 comments: Links to this post

Last Saturday was the opening ceremony of the current Sumo tournament. There are 6 each year - 3 in Tokyo and 3 in other major Japanese cities. I missed the June one so as soon as the tickets went on sale for this month I was online. Pooch and I are going this weekend so this opening ceremony was a kind of warm up for me! The venue is next to Ryogoku station, which is therefore suitably decked out with the appropriate face cut out. 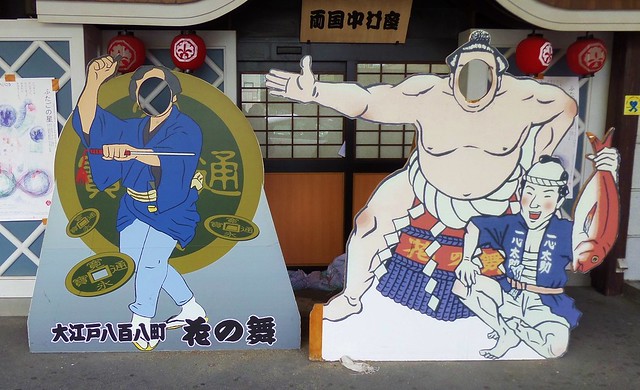 The venue itself is surrounded by these very brightly coloured flags, fluttering in the breeze. 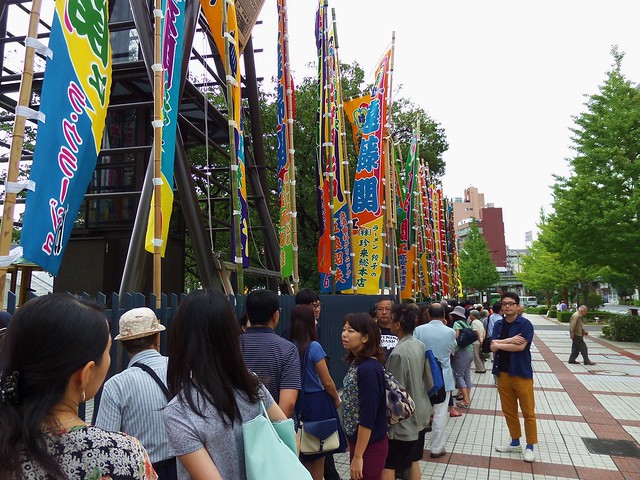 Once we got inside it is a bit like any big stadium - lots of muddy coloured corridors with snack vendors dotted about and then double doors taking you into the main arena. Wow! It was pretty impressive. 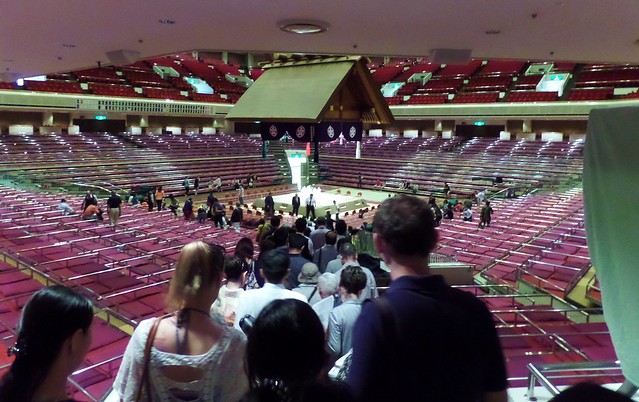 The roof suspended over the ring resembles a Shinto shrine, emphasising the serious nature of the event. This isn't just fat guys grappling - this is a serious profession with many spiritual elements. 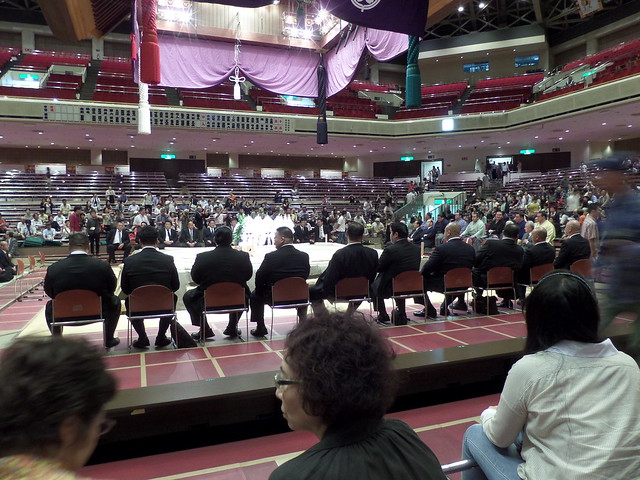 As the place filled up the ringside seats were taken by very serious looking men in dark suits. The presumably less important men (equality, never exactly advanced in japan, has not yet reached Sumo and absolutely everyone involved is male) were cross legged to one side, behind the Priests. 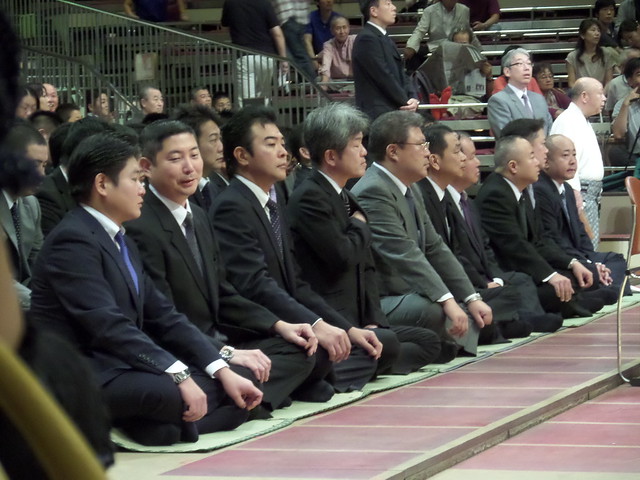 On the other side sat a row of Sumo wrestlers. I would have liked to know how they were chosen but can only speculate. 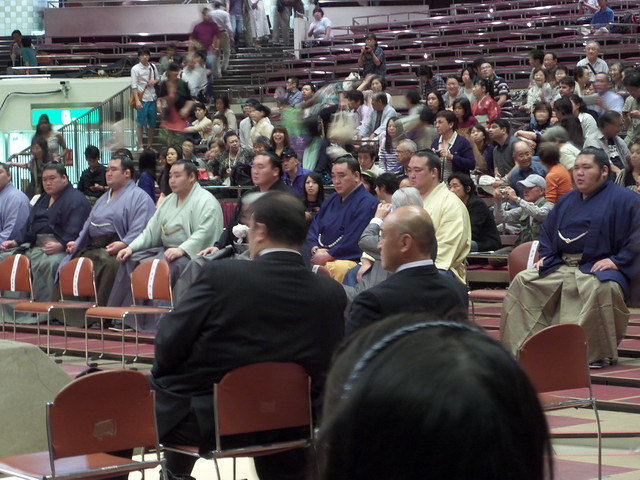 In all there are 47 training stables which contain roughly 640 wrestlers. The most junior have to get up at 5am and as well as training are servants to the senior ones. Wrestlers of any rank are only allowed to wear traditional japanese yukata and wooden shoes and have to obey a huge slew of rules. According to wikipedia, after one top guy was in a bad car accident they were forbidden from driving their own cars. That might be testicles but it could equally be quite true.

The three Priests processed in and sat down before the ceremony started. The Priest on the far side didn't have his own bit of ceremony to perform and just assisted the senior one. 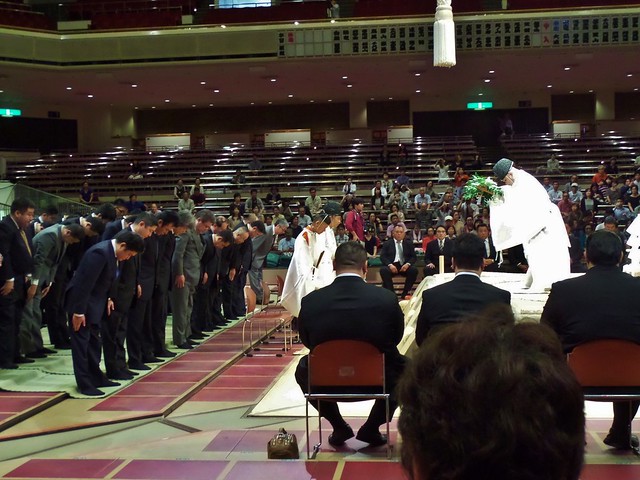 The Priest nearest me was the first to get up and waved the bamboo branches to all four sides of the square and said some things before sitting down again. There was a lot of bowing going on. The two junior Priests wore very beautiful white silk outfits. 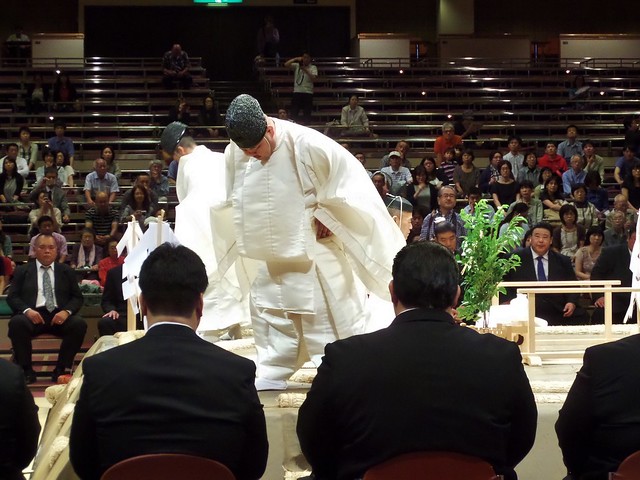 The bright spotlight over the ring meant they looked very angelic and almost seemed to be glowing. Their hats looked a bit like armadillo shells with black glitter on while the senior guy had an amazing hat - almost egyptian in appearance - which included a part that bent over the top of his head and boinged up and down as he moved. 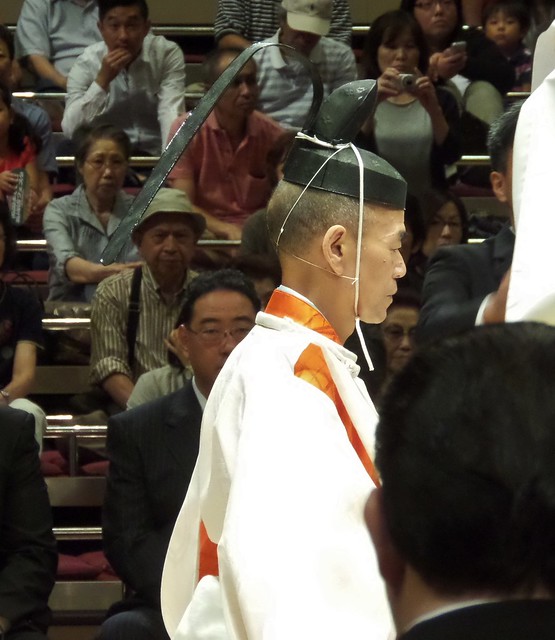 He had a bit more colour to his outfit and some beautiful purple pantaloon type things on underneath. 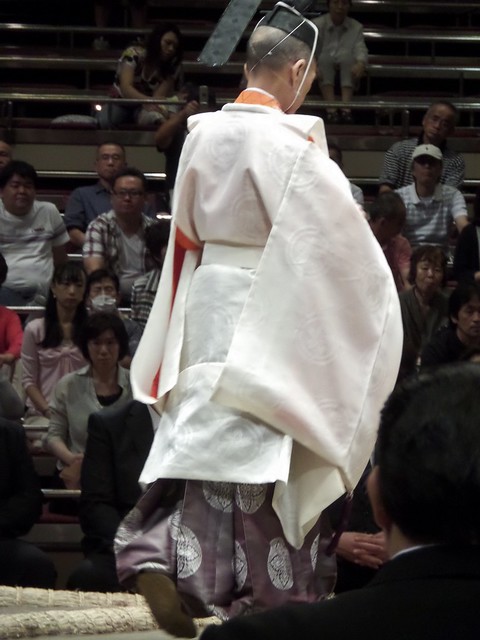 I was itching to get a better look to see if they were woven, embroidered or printed! His part of the ceremony involved some lengthy chanting and overseeing the blessing of all four corners of the ring and the ring itself, assisted by the other two. Once the Priests had finished there were some big japanese Taiko drums carried around the ring twice by some younger guys. 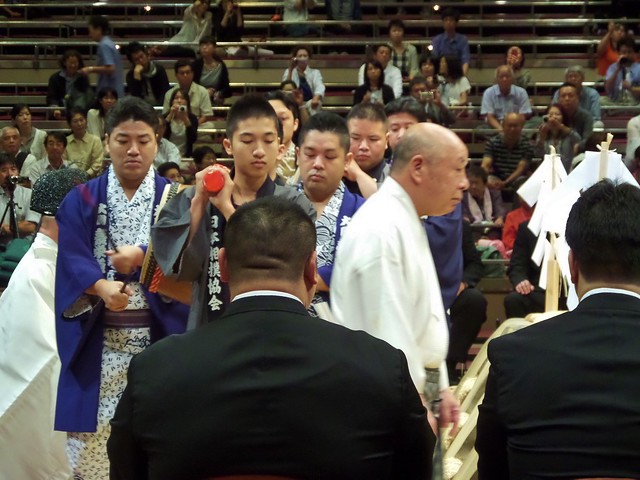 And then just as suddenly as it had started it was over! All that remained was for the crew to fill in a post hole in the middle of the ring and use that huge wooden croquet mallet type thing to smooth and compact the surface. 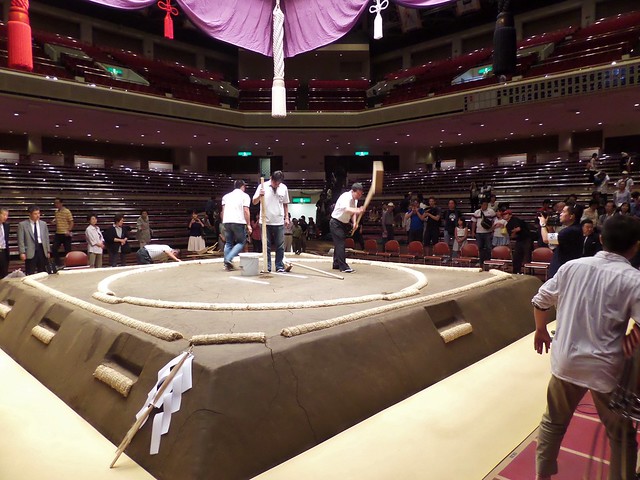 Back outside there was a display of some of the trophies given to the winner. The main trophy is pretty impressive and stands about 3 feet high. 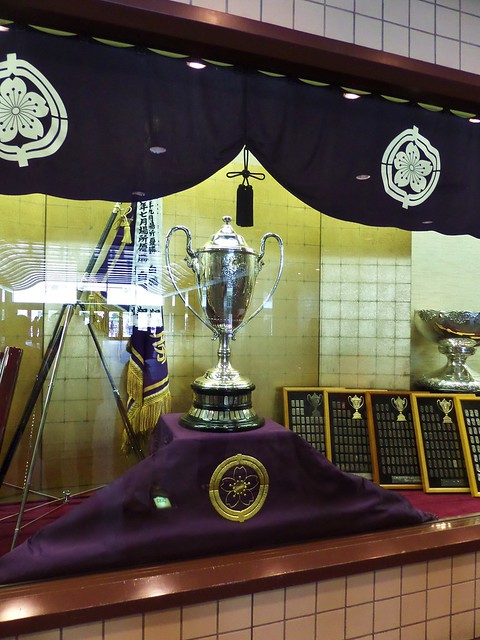 However, it isn't just the one trophy. Coca Cola gives a huge silver coke bottle. The Czech Republic gives a large crystal bowl. Lots of people give other bits and bobs. Everything in the case represents the trophies for just this tournament (I think - possibly for the year. It's difficult to be certain when all the labels are in japanese.) 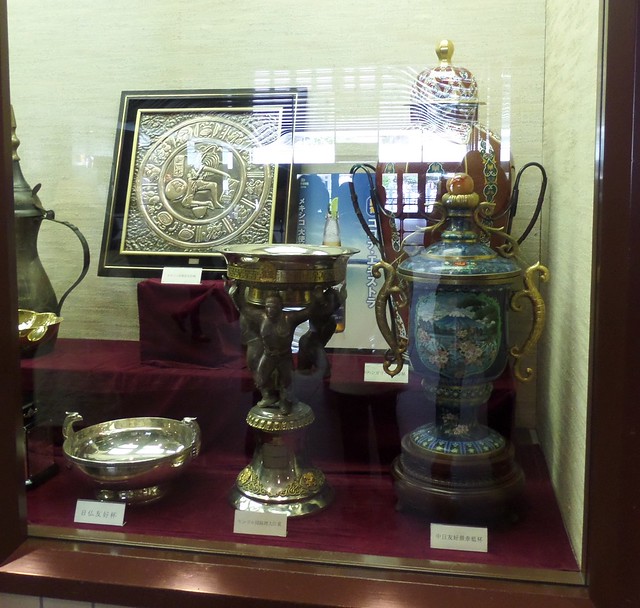 It all adds up to a prize more like Supermarket Sweep than the FA Cup.

After a quick look around the onsite Museum (no photos allowed) we had a tour of some local Stables. These ranged from the quite impressive... 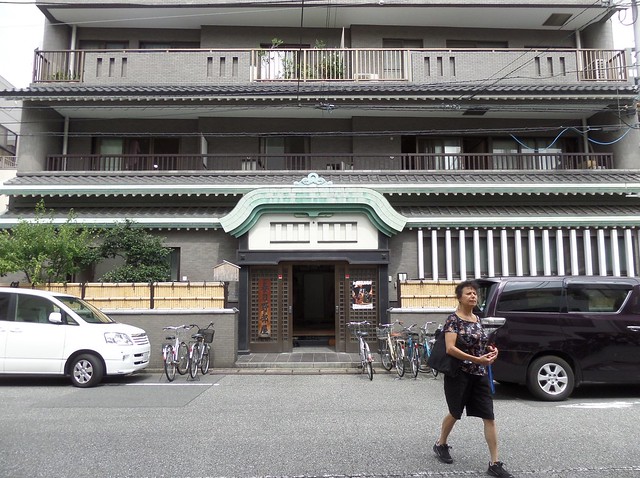 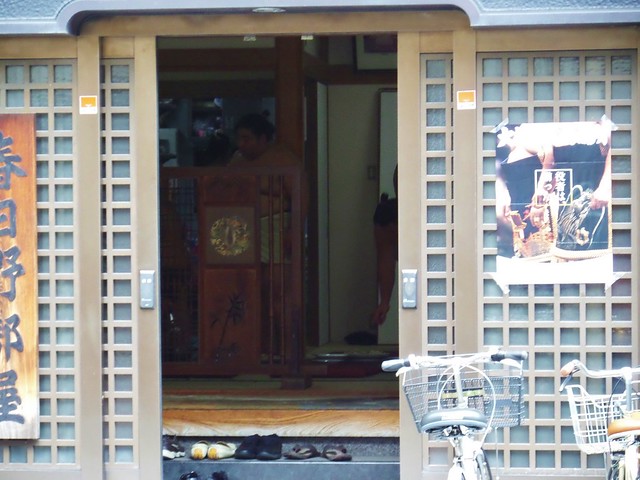 ...to ones that looked more like a Scout Hut. 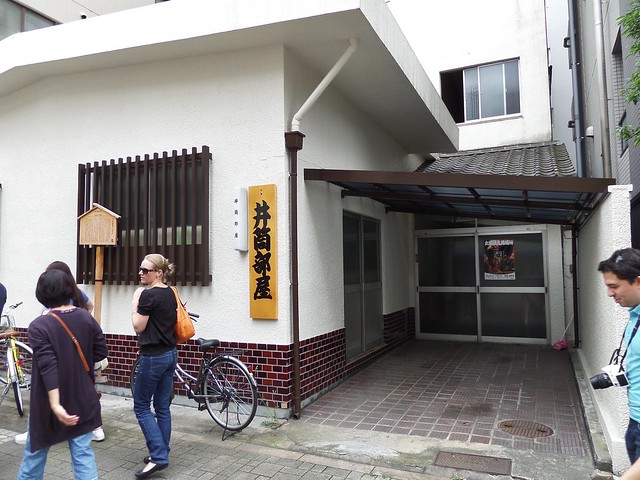 I have oodles of Sumo facts to share but I am going to save those for when I blog about the actual wrestling. I am really excited to be going!


Posted by littlelixie at 9:16 am 2 comments: Links to this post