I could never find a list of these when I looked, so I decided to amalgamate all the leaflets I picked up at last week's Quilt Show. I haven't ordered from these people personally and you'll need to check if they do international shipping if you're not in Japan.

Posted by littlelixie at 12:53 am No comments: Links to this post

Weekend in Hakone with A Finished Quilt

Pooch and I just had a lovely weekend in Hakone with our friends Noriko and Nari. They own a flat there and although Pooh and I were in the area last December we jumped at a chance to spend a weekend in such a lovely location with such lovely people. It was the perfect time of year to visit. 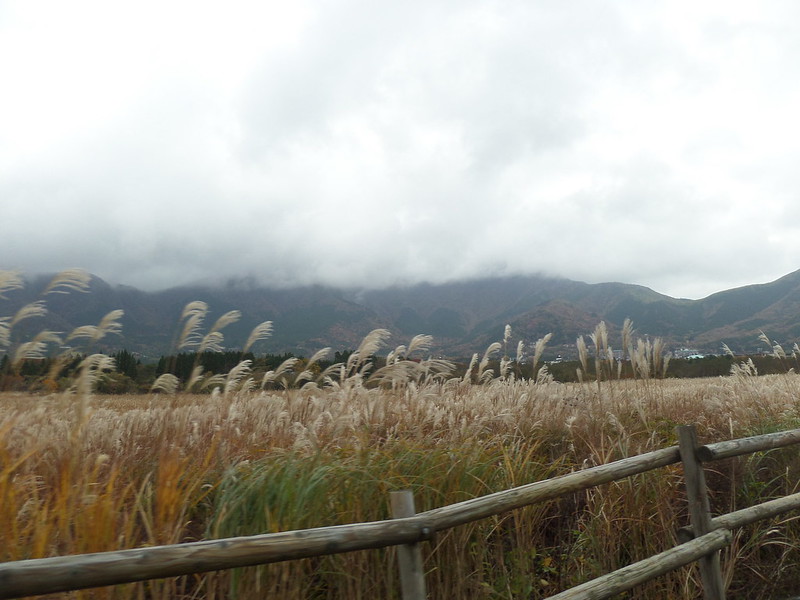 See the tiny island out at sea? 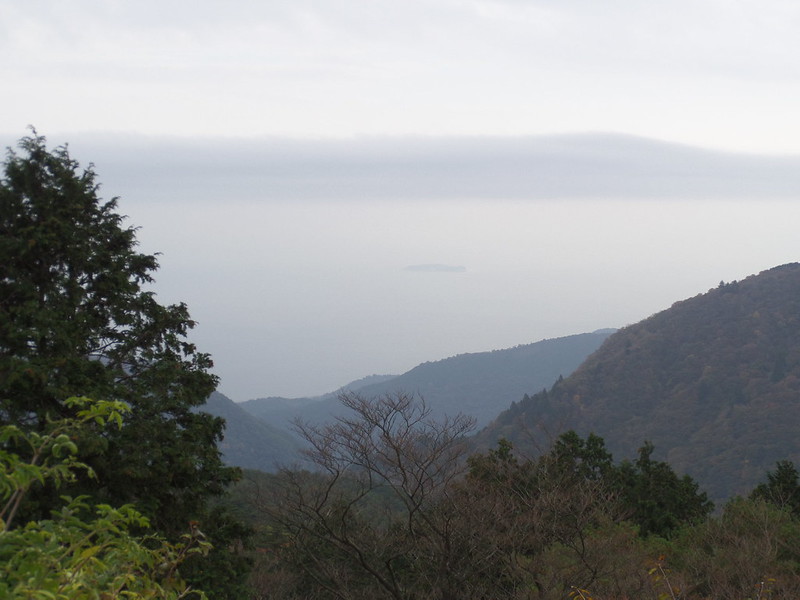 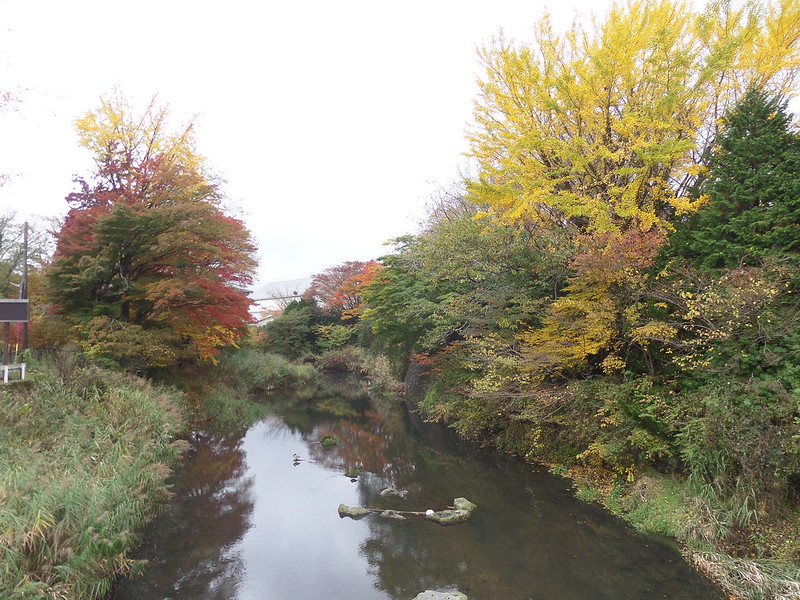 The yellow is mainly Ginko trees while the red is Japanese Maple. Beautiful! We also got a peek at Fuji-san (Mount Juji). 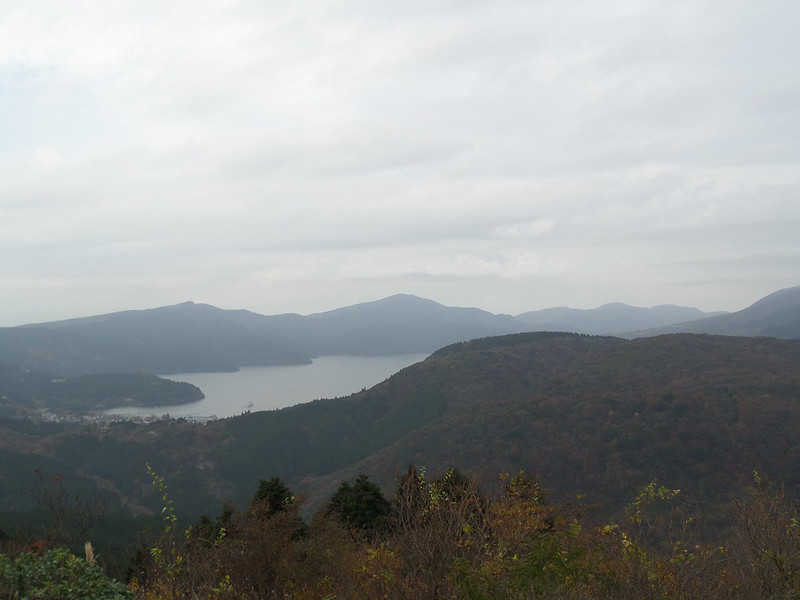 See him? Hiding behind the clouds. Let me do a little artistic rendering... 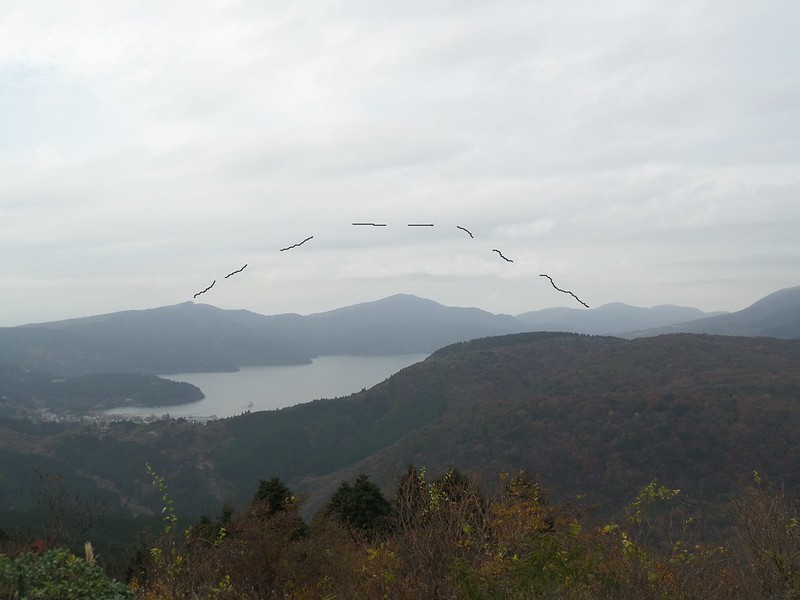 You could see his edges occasionally as the misty clouds moved across him. On the way there we stopped off at Odawara Castle. 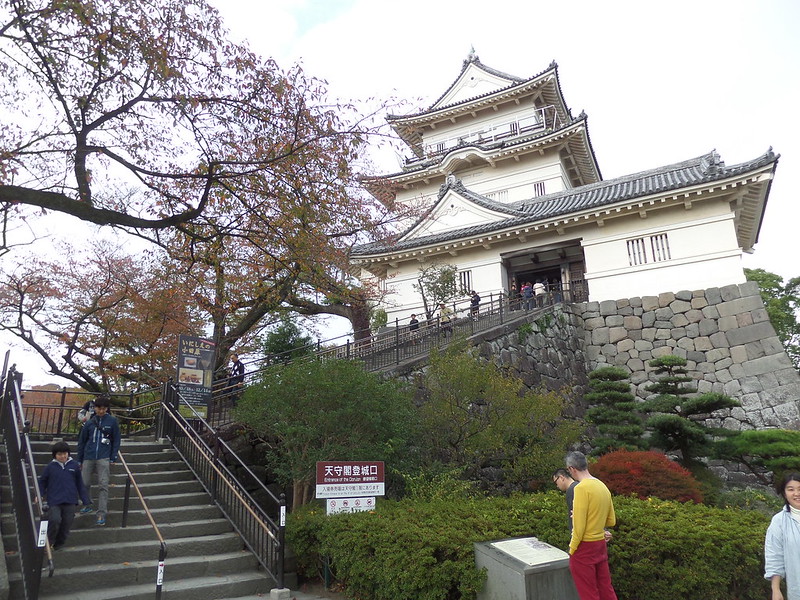 That's Pooch there in yellow, blending. It's only a little one but it's the only Japanese Castle I've seen so I was quite excited. There was a Chrysanthemum Festival going on, as you do. Pretty amazing creations. 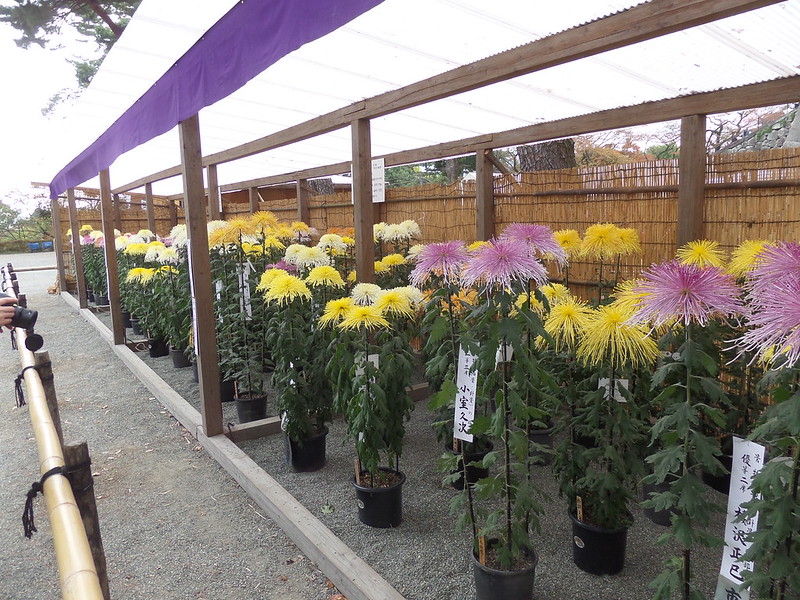 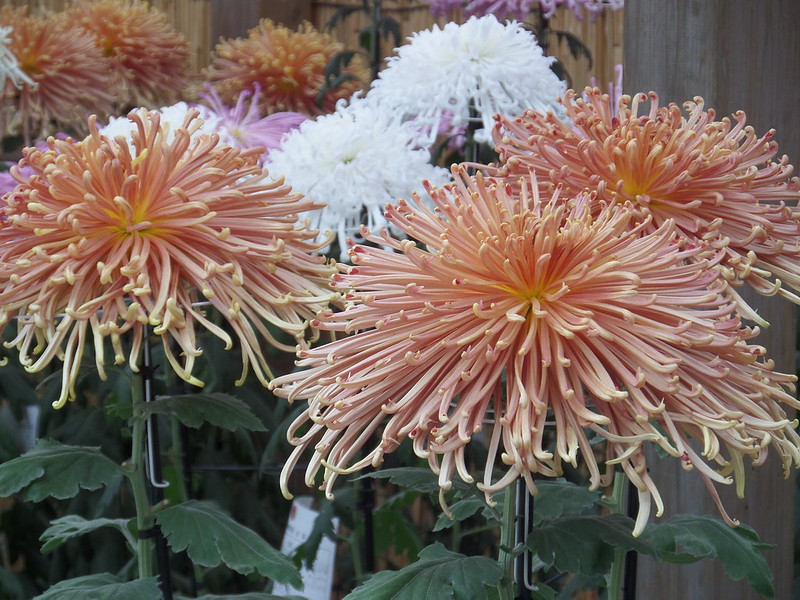 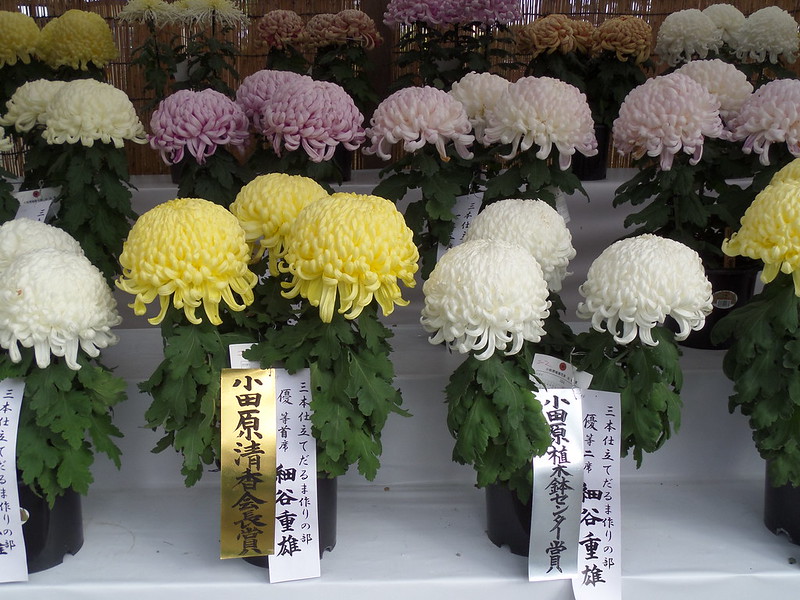 While there I gave Noriko the quilt I had been making her and Nari. Pooch kindly modelled it before we left. 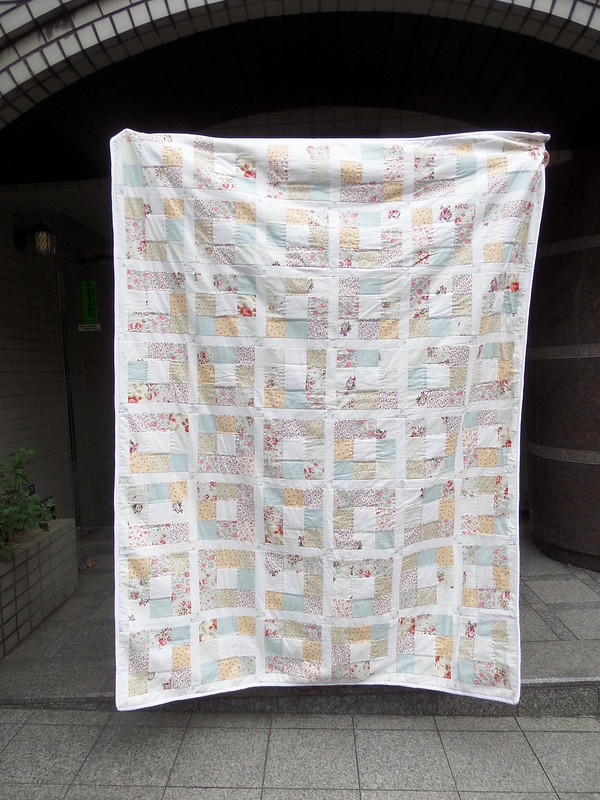 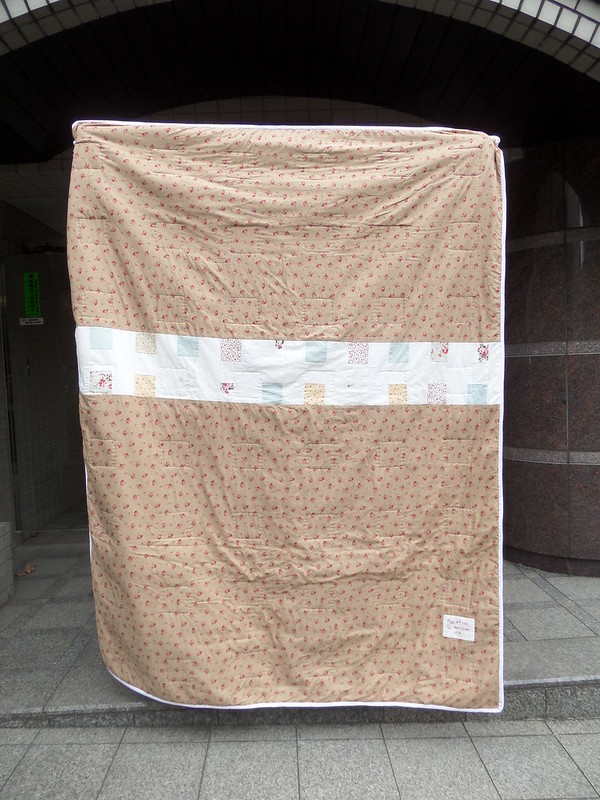 It is a very simple one and I hand quilted it a little bit about a cm outside the edge of the central white square in each block.

As well as seeing them both AND being in such beautiful surroundings AND being fed to the gills with amazing food by Noriko (who was simultaneously giving Pooch cooking and sashimi cutting lessons) was the Lalique Museum. I frickin love Lalique. I did a project on his jewellery at Art College and it's been love ever since. Sadly it was no photos in the Museum itself but the outside was pretty nice. 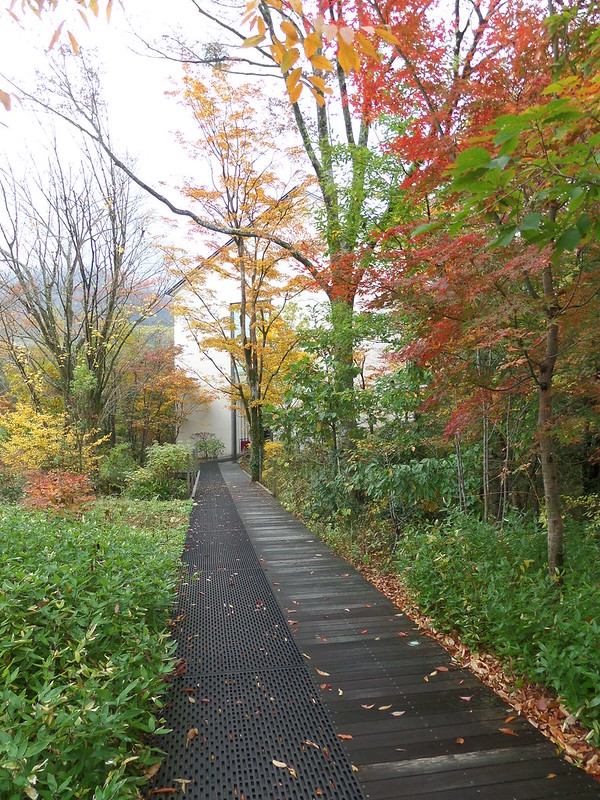 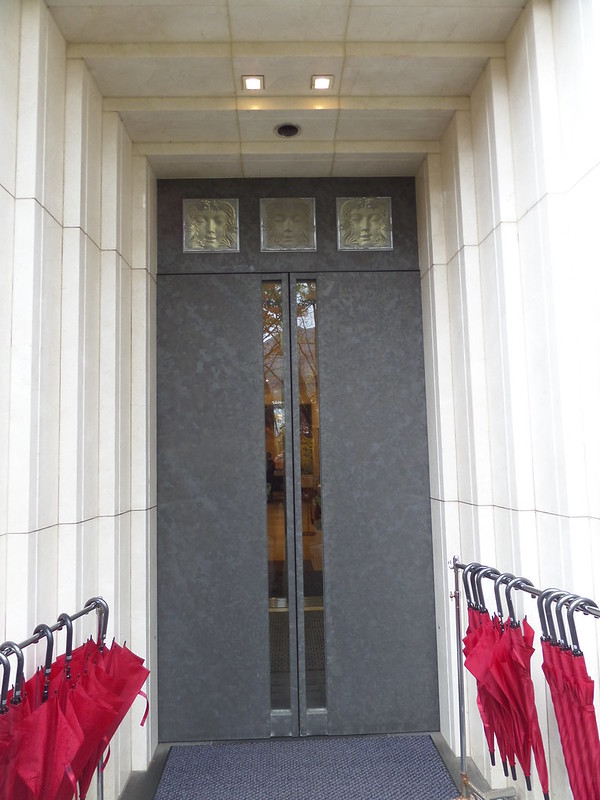 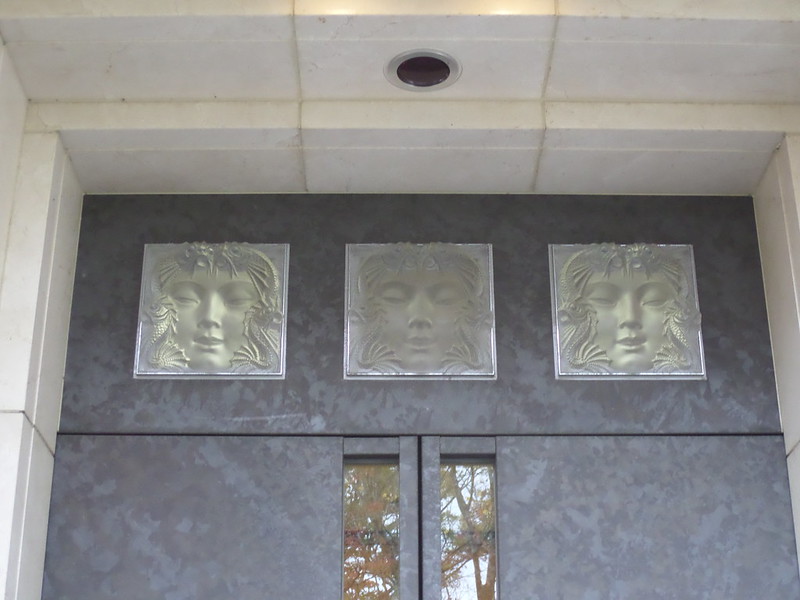 The collection included a number of items I had drooled over in books for the last 15+ years so it was thrilling to be seeing them for real. The man was a genius.

It was a perfect weekend!


Posted by littlelixie at 2:51 am No comments: Links to this post

The final part of this write up is all about the shopping. I had arrived shortly after the show opened but it was lunchtime by the time I got to the shopping area. It was filling up and there was a lot to see. 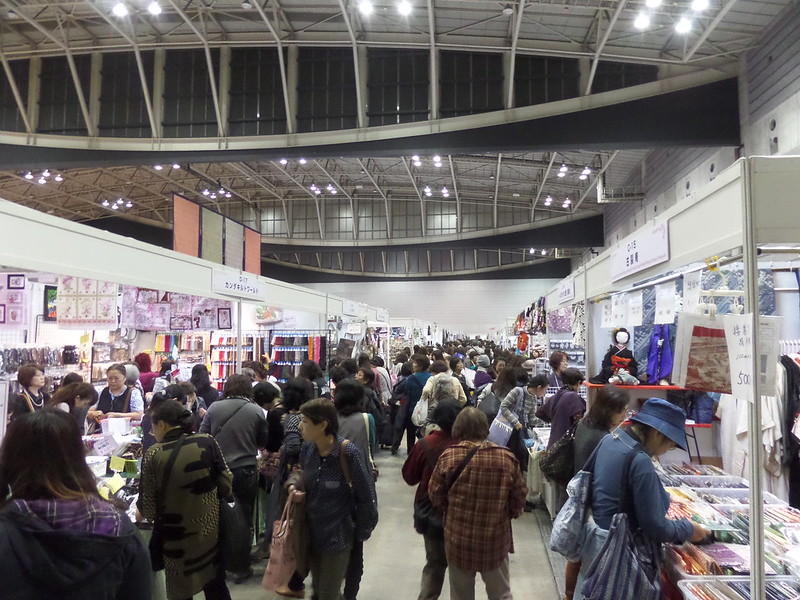 The big names were there - the sewing machine companies and of course Clover. 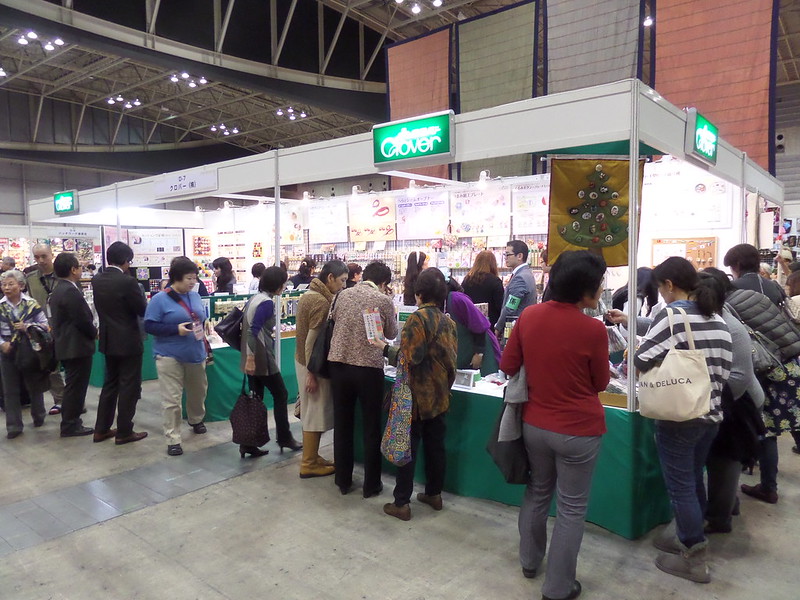 And Olympus, who aren't a name we know in the UK but I'm not sure about the US. In Japan they sell a lot of kits for things featured in magazines. 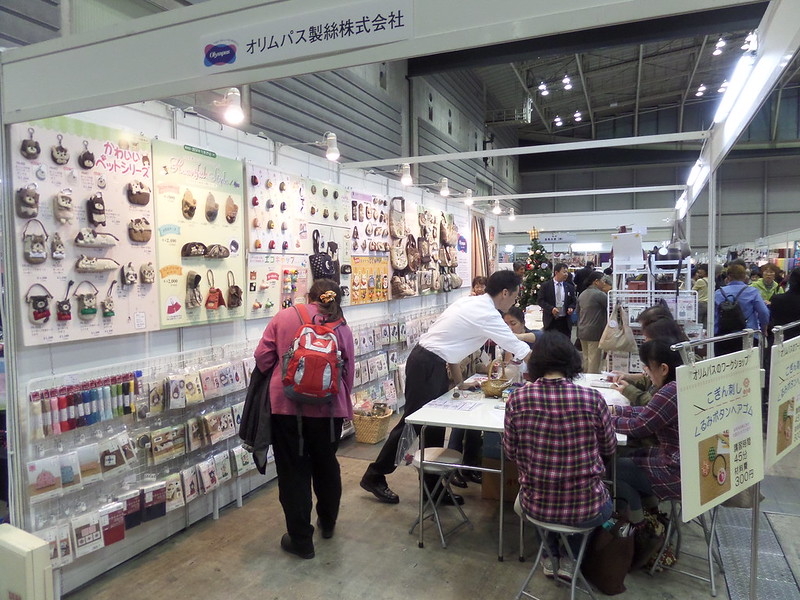 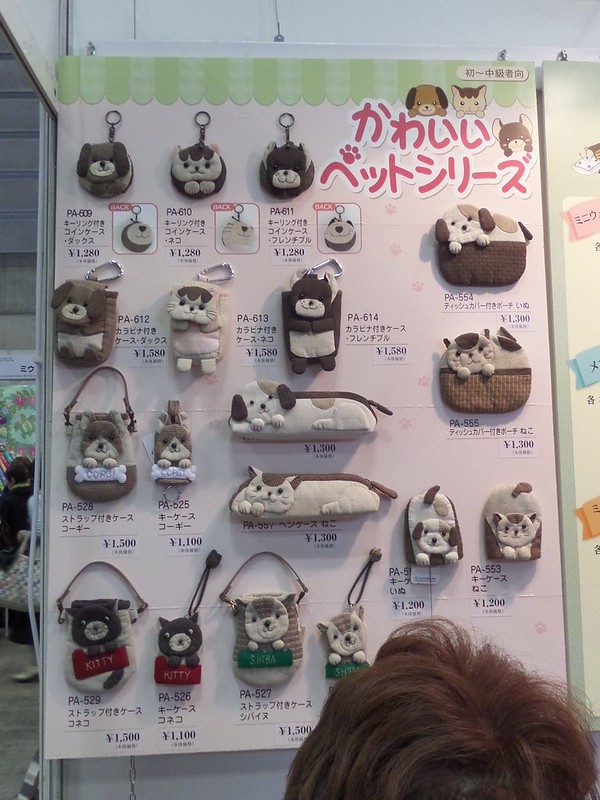 A big thing on a number of stands was "make your own zip". 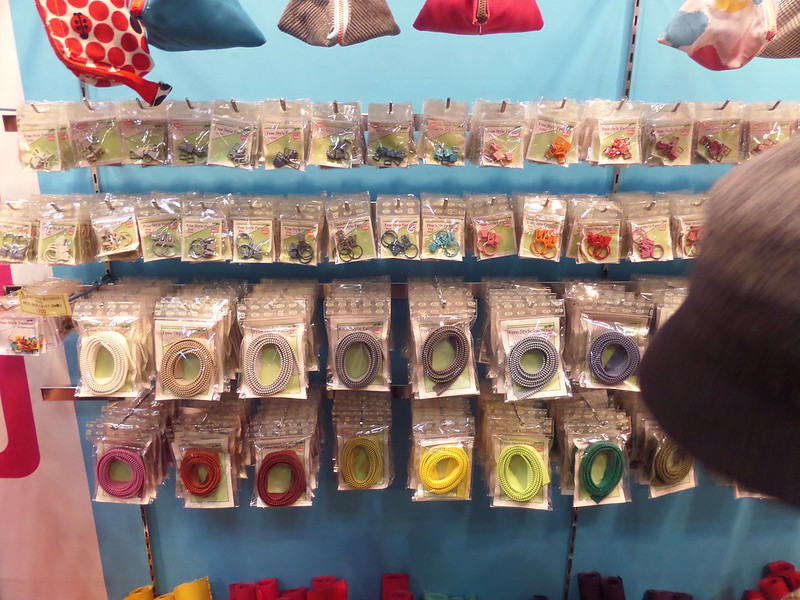 You buy each side of the zip, the pull, the bit of metal that marks the end etc and put it together yourself. I dunno. I guess it was the new product for the year. For me, I was coo-ing over the purse frames. 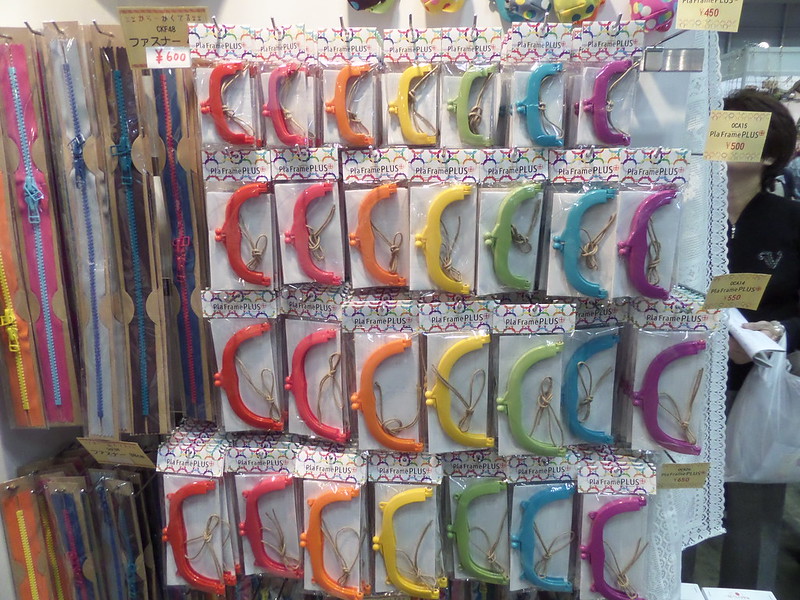 The Hawaiian quilt side of things was well catered for. 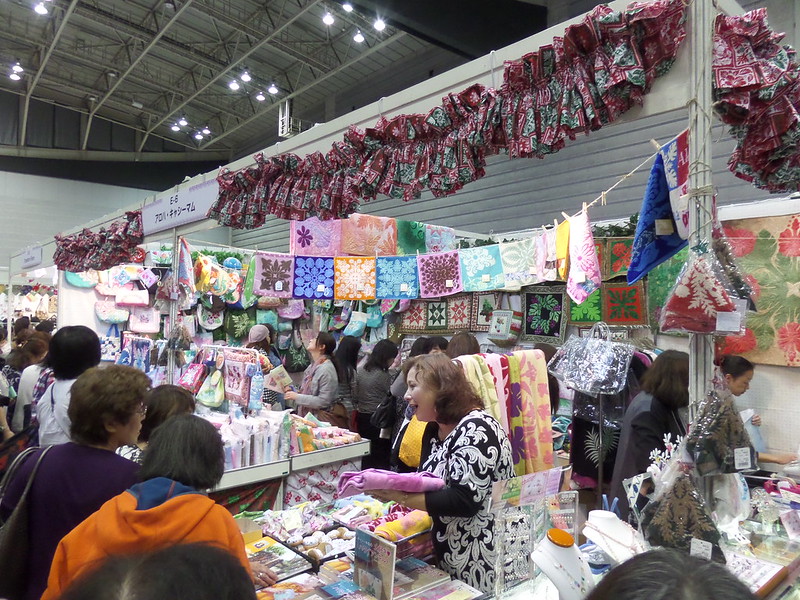 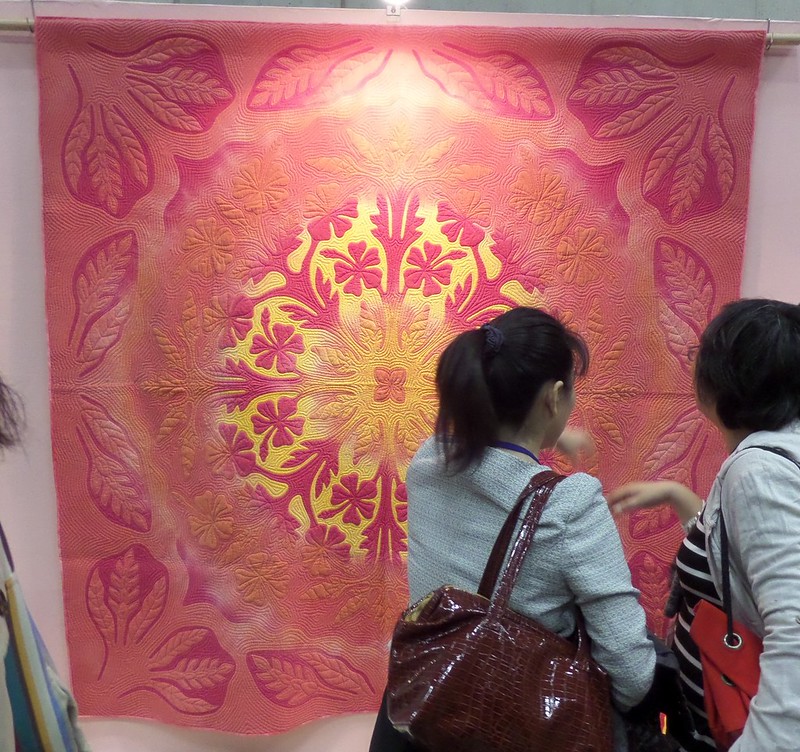 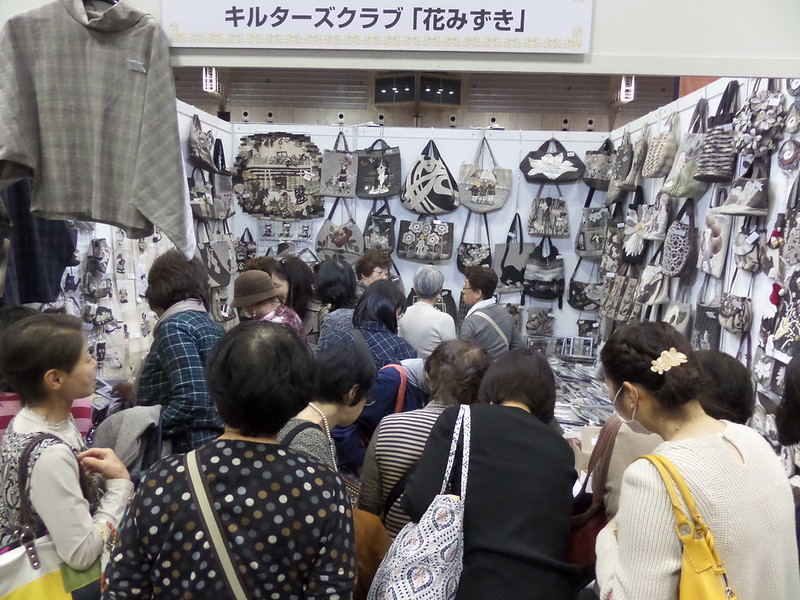 ...while others were relatively empty. Just like the waffle and french toast cafes in Omotesanda. One minute you've got teenagers queuing around the block in the pouring rain for a bite of chocolate pizza, next day you've got spiderwebs across the doorway. On another stand I absolutely fell for these house pincushions.

And almost for the cat ones too. 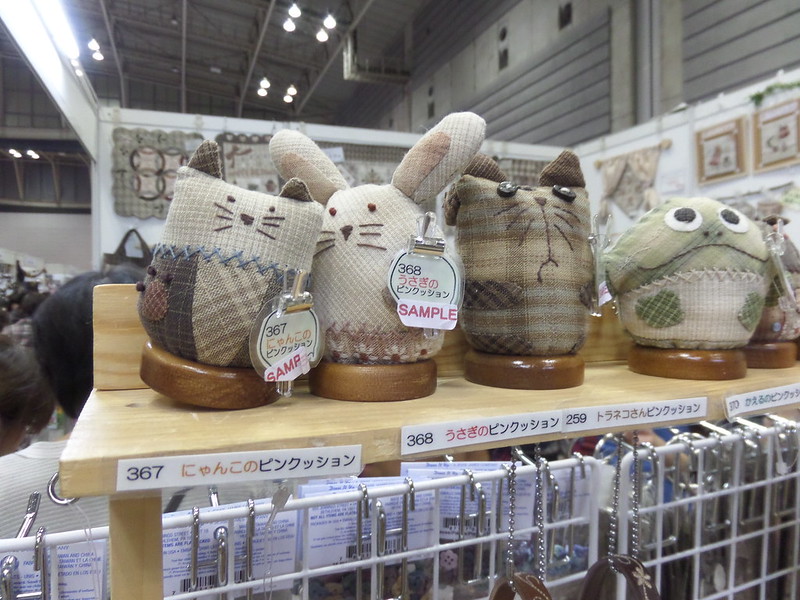 So what did I bring home out of this medley? I was amazingly restrained. On the fabric side I did get a few bits and bobs. 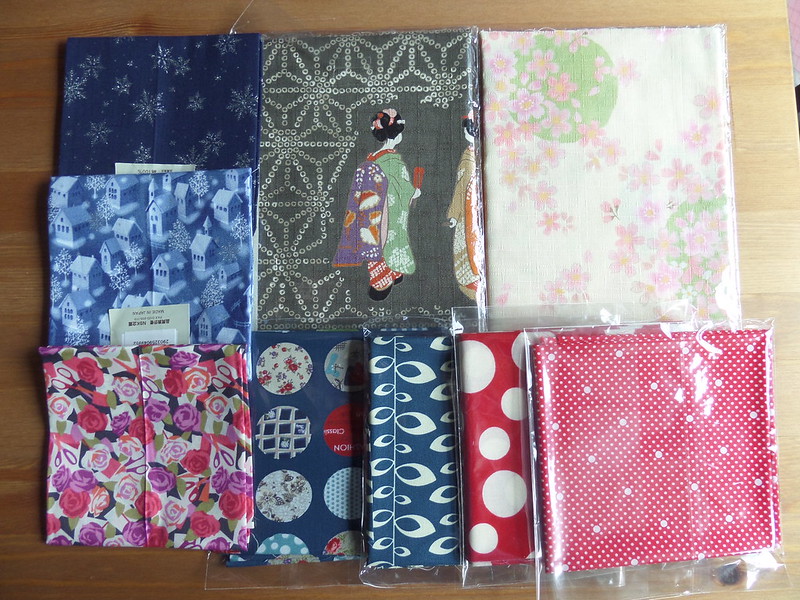 Some traditional woven cottons and a free Vilene sample someone gave me. 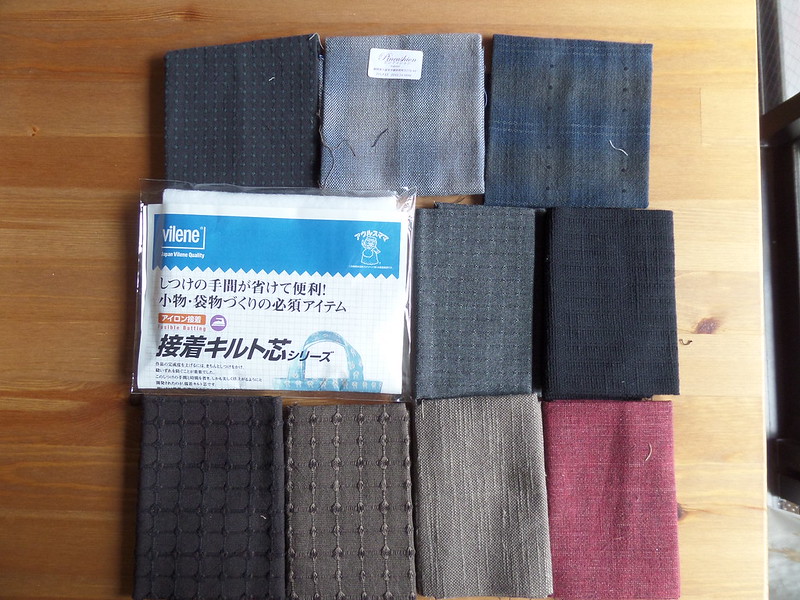 On the left is a pack of woven, textured cotton from one of the Southern Islands of Japan (I think a lot of people think of Japan as just being one island but it's actually quite a few, some not even that close to the main bit that Tokyo is on). On the right is a pack of woven and indigo remnants. I was deliberately on the lookout for 'japanese blues'. 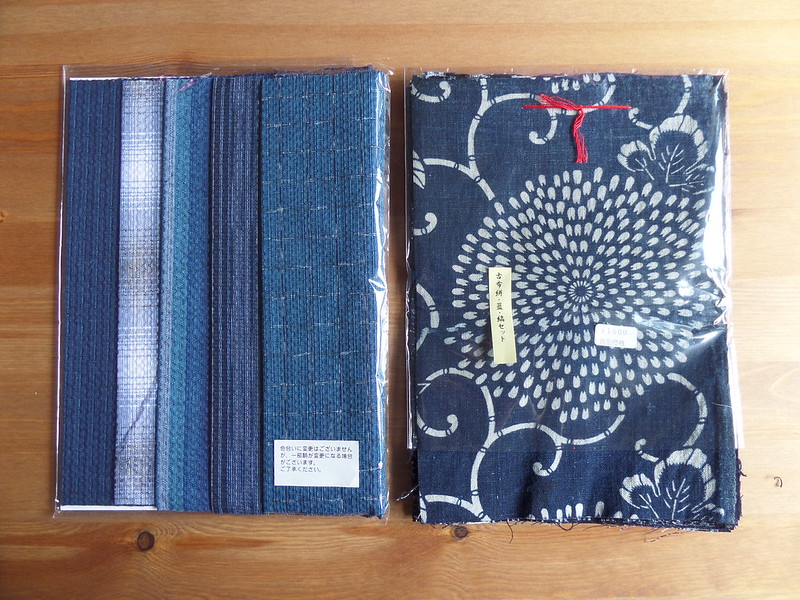 Then I did buy one of those bright plastic purse frames. I also got a bag pattern from Olympus (just the pattern - not a kit) and a few attempts to save my sore fingertips when I am hand sewing. 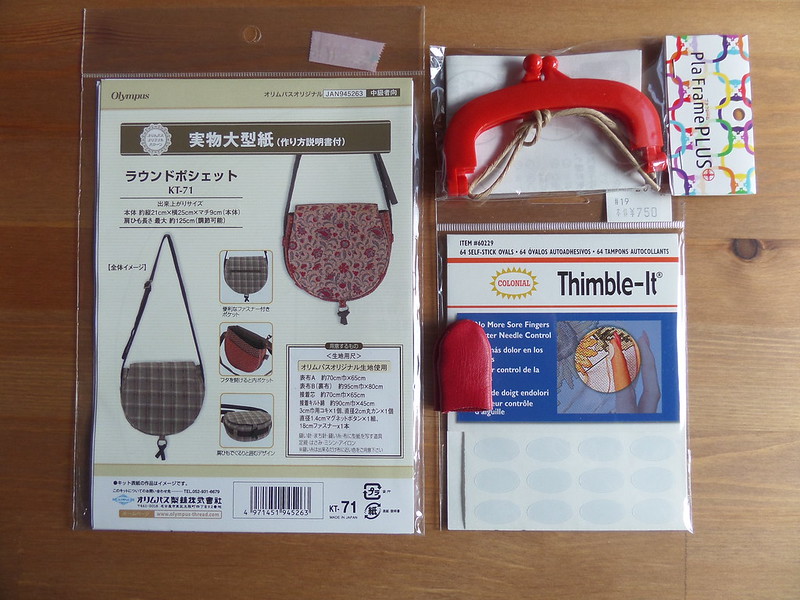 Lastly, two small kits - one for house pincushion A in the photo earlier in this post, and another for an apple pouch I've had pinned on Pinterest since before coming to Japan was a twinkle in Pooch's eye. 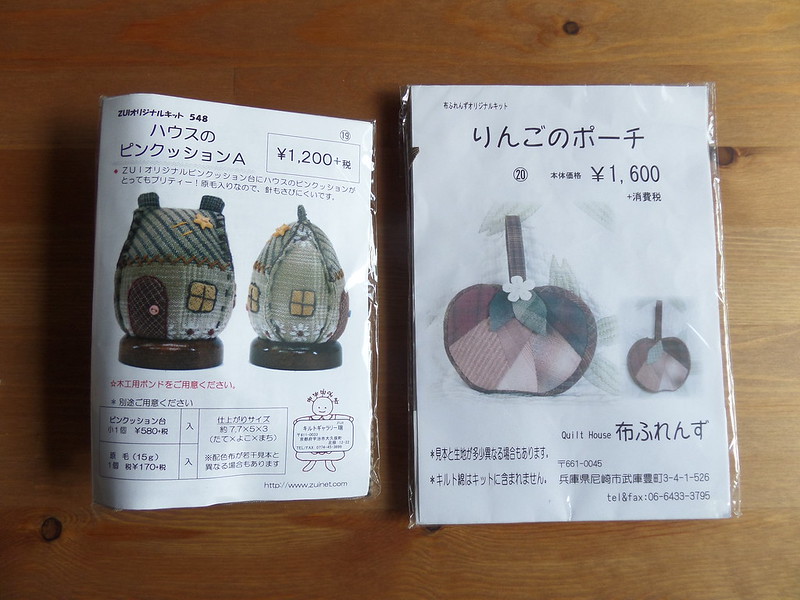 Finally it will be mine!

Overall this was an amazing quilt show. I went on the opening day and got there for just after opening time and was able to see all the quilts without having to use elbows or my usual peer-over-their-heads technique (handy to be 5'7" when your average japanese lady is 5'2") - most of my photos are person-free. This contrasts completely with my experience of the Tokyo quilt show (genuine photo from when I was there in January). 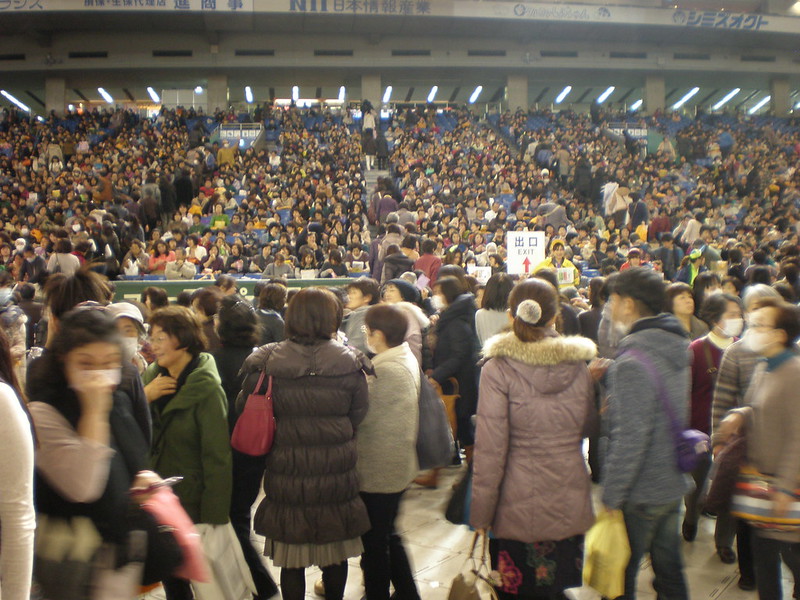 That was swamped - this was much nicer and it felt like it was the same exhibition size, although with more shopping options. I am such a lucky bunny to have had the chance to experience both!