Normal Service Will Resume At Some Point

I am currently living with The Pooch in a tiny studio flat in Paddington (London) without any craft materials other than one half done pair of knitted socks and one patchwork hand sewing project. I have also been ill with a virus pretty much since the plane touched down from Tokyo two weeks ago AND I sprained my thumb lugging that wretched suitcase around over xmas so can't in fact knit anyway until it has healed. As a result I've not got a lot to blog about apart from the occasional outing completed between bouts of coughing.

By March I hope to be living in a more permanent place in a country to be confirmed. Until then it might be a bit sporadic on here. 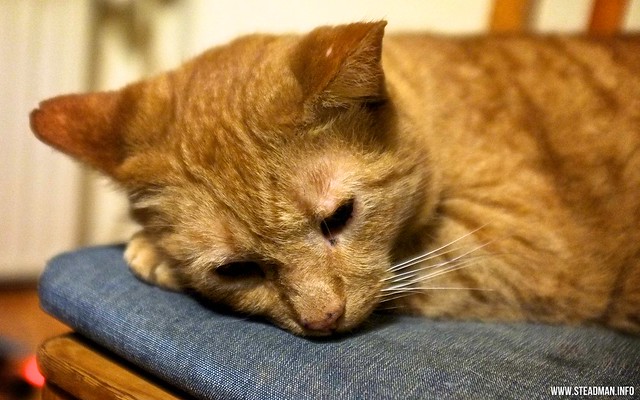 Here are some more cat pictures to round things off. I hate blog posts without pictures. 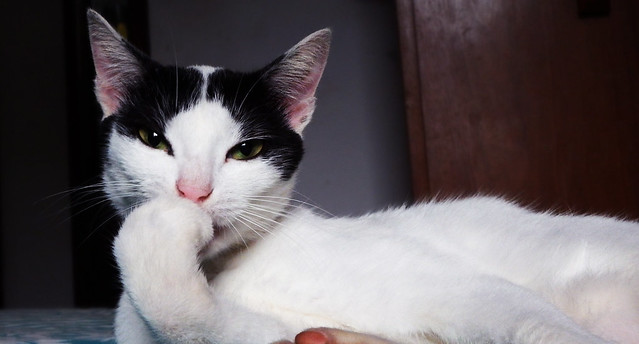 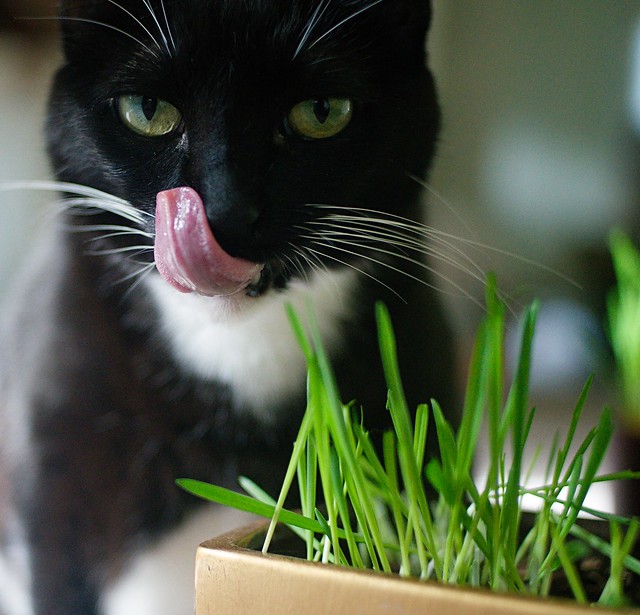 A Delayed Visit to London's Only Cat Cafe

When I first heard about the crowdfunding campaign to get a cat cafe open in London I was all over it like a rash. I was so excited. I signed up and pledged my hard earned wonga and then sat back, eagerly awaiting the opening date. That was at the start of 2013, and shortly afterwards I found out I'd be moving to Japan which then finally happened in November of that year. I vaguely remember that the cat cafe was supposed to have opened by then but got held up by planning permission, so I was already in Tokyo and whooping it up in the cat cafes there by the time Lady Dinah's opened its doors. 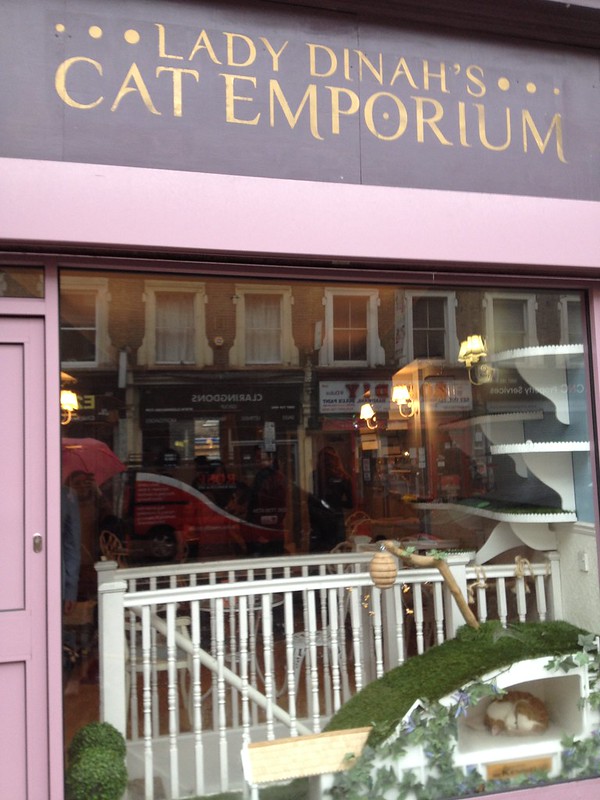 In return for my funding I got a "Nine Lives Card" entitling me to a discount on the £6 or so cover charge for a 90 minute visit for my first nine visits. Saturday was my first! The staff were very friendly and I was seated at my own table downstairs. 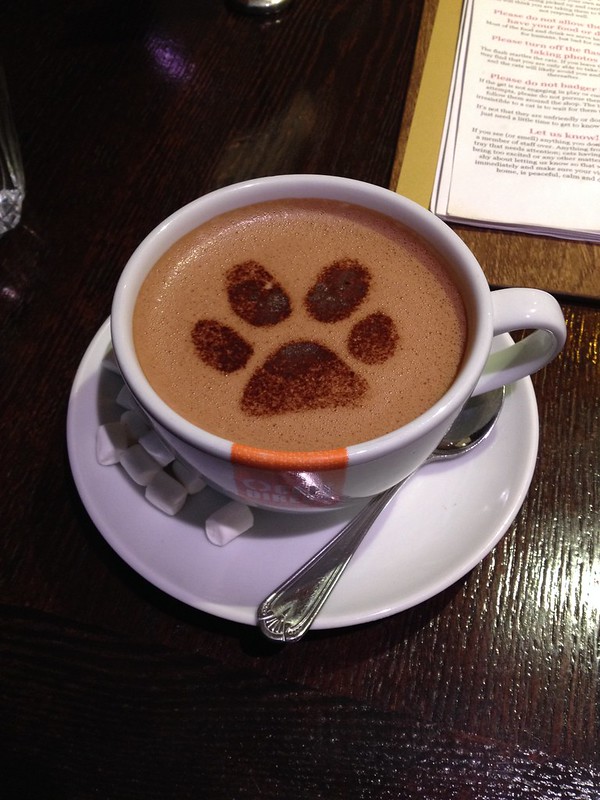 There were cat perches everywhere and sure enough there were about five of the seven or so cats sleeping in different spots. 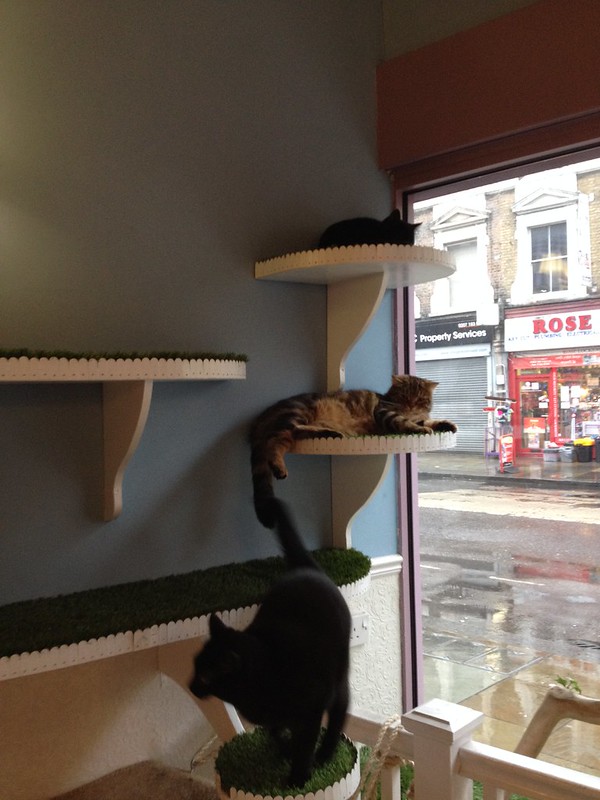 Some of these were accessible and some weren't. Before I went I had read one of their updates online saying that some people had been disappointed with the number of cats that were sleeping during their visit. I read that statement in the context of Tokyo's cat cafes and assumed the disappointment was due to the cats not running after profered toys or jumping into laps. What I hadn't realised was that you are not allowed to touch sleeping cats, even if they are sleeping right next to you. That basically meant that there were two cats to "go around" what turned out to be a really large number of people for the space. If the downstairs room was a cafe I would have described it as definitely full. Perhaps 20 people were down there? And half an hour after I got there - in what was the first "sitting" of the day - more people arrived and were seated at the tables upstairs in the play room. What quickly happened was that as soon as any of the awake cats did something (such as walk across the room) it was immediately surrounded by a little crowd. 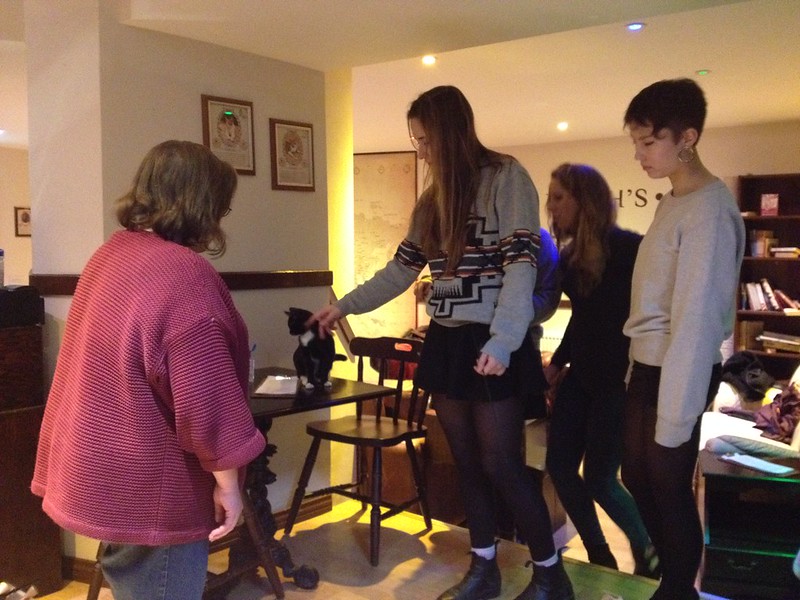 The cat cafes in Tokyo and Seoul were never anywhere near this crowded and often I'd be the only one there for at least some of my visit.

On their website, Lady Dinah's talk about how some overseas cat cafes deprive cats of food so they beg customers for treats - something I never saw in Tokyo or Seoul - but at Lady Dinah's the cats instead were stimulated with some sort of powdered chicken treat. Initially this was done by staff but they then handed it to visitors so the cat in question would interact with them. This is what that looked like. 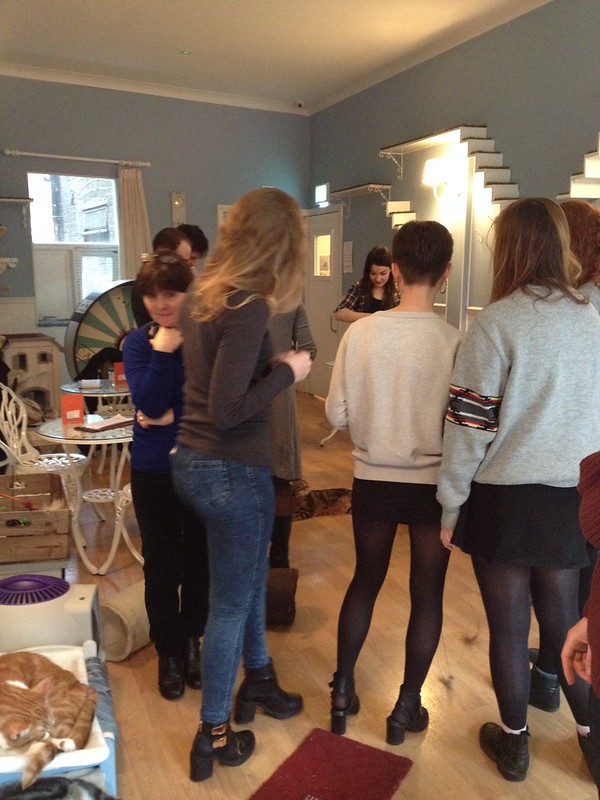 An even bigger crowd around the cat involved. If you were at the front of the crowd you got to pet the cat. Otherwise, you got to watch other people do it.

While I can understand that the thinking behind Lady Dinah's is all to protect the cats, I feel there might be a bit of anthropomorphism going on. If your own cat was asleep at home, you wouldn't fear upsetting its emotional balance by stroking it. And if the cat was peeved at being disturbed it would go and sleep somewhere else. The same thing used to happen in the Tokyo cafes I went to. Cats wishing for a good snooze would sleep up high. 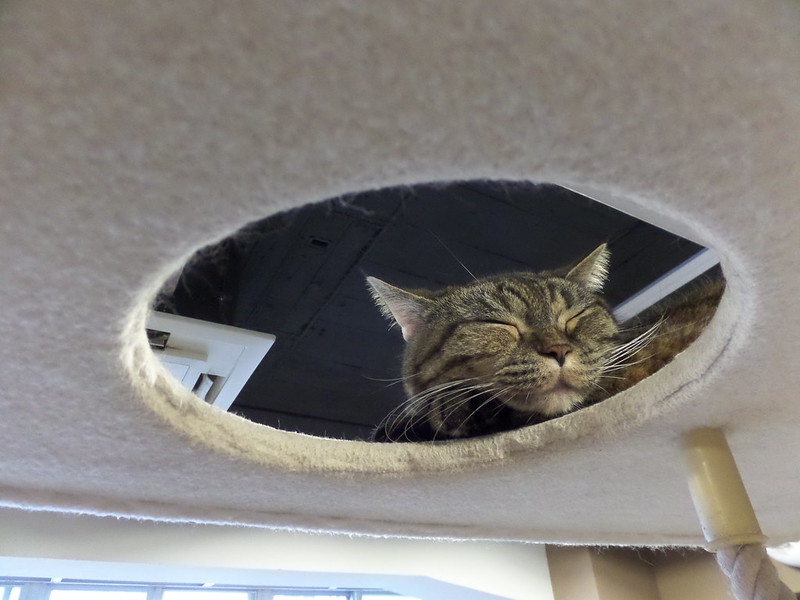 Cats open to a bit of doze/tickle would stay low. 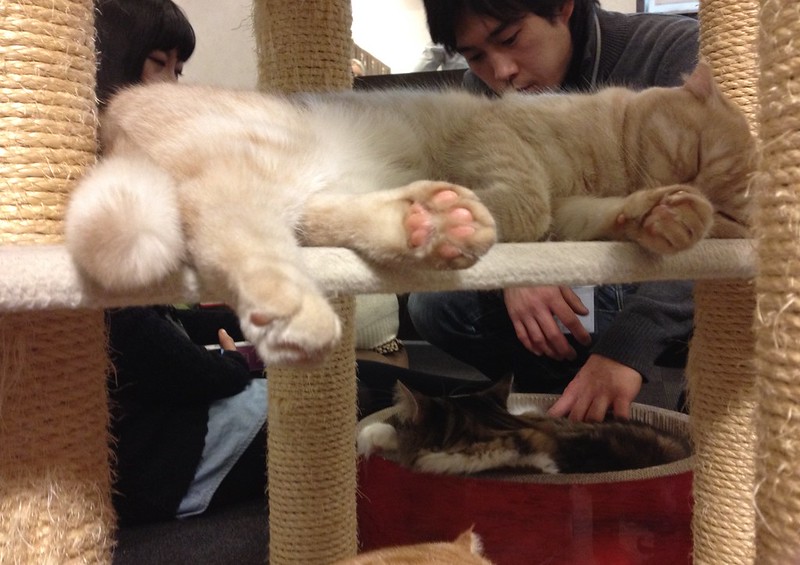 Afterall, these cafes are only open for about 8 hours a day so that leaves another 16 for undisturbed r+r.

On reflection I felt that if I had never been to any other cat cafes I would have been satisfied with the experience on offer at Lady Dinah's. In fact I felt the word "experience" summed it up pretty well. It is a "cat experience" and a cafe. It was only having experienced a "cat cafe" as they were originally intended to be that made the name a misnomer in this case. However, as the Knit Harlot once said when I asked her for her opinion about knitting needles on planes (at the time they were banned) "It's their plane so it's up to them to decide what can go on them." So it follows that this is their cafe and their cats (I forget who exactly 'they' are) so it's up to them to decide when you can stroke them. However, I won't be needing the other eight of my nine lives so if anyone in the UK would like the card let me know and I'll post it to you.

One thing about the cafe is its very interesting location - on Bethnal Green Road. This is a low income area of London, coincidentally where I was living when I met The Pooch. You will not find many other hipster places just here which, let's face it, is basically what Lady Dinah's is. Depending on the way you choose to walk you can end up walking through parts of Shoreditch which has been gentrified and is now full of hipsters wearing layers of grey, black and plaid. This means the graffiti, something I quietly admire in general, is a mix of traditional and modern. You get the more artsy stuff... 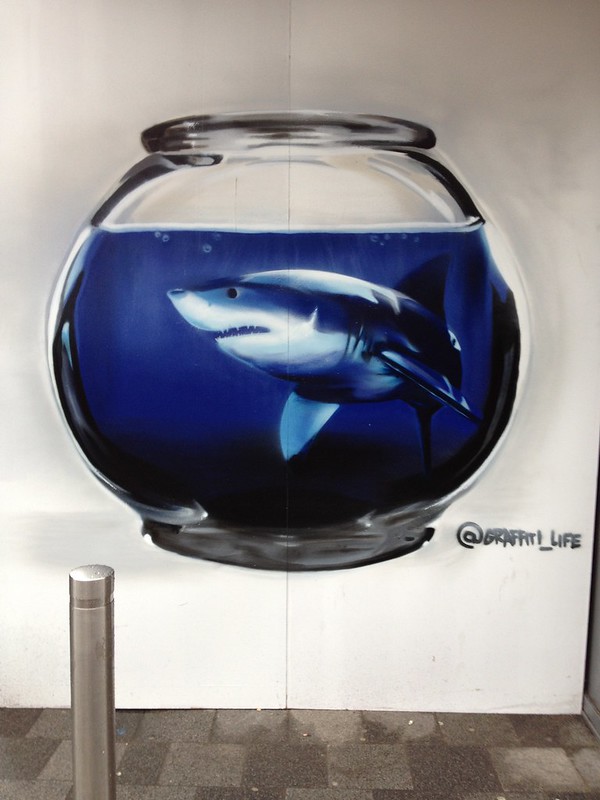 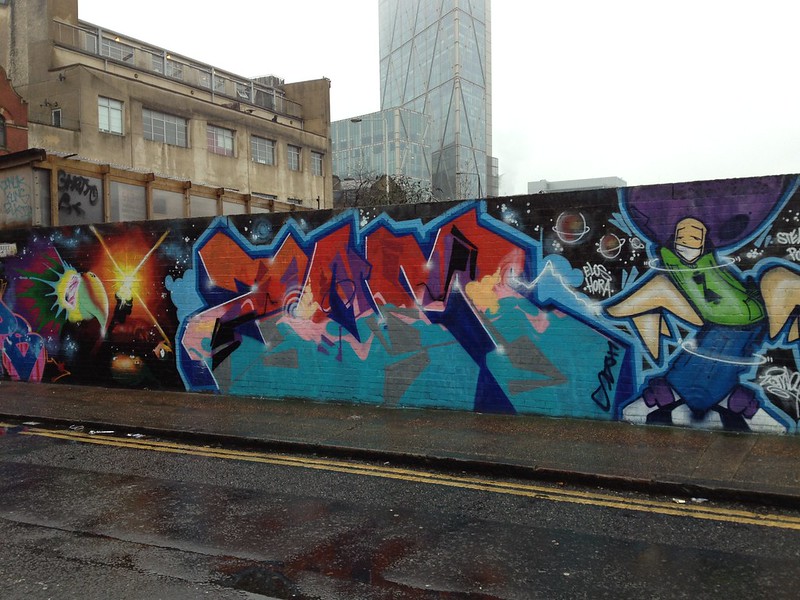 My personal favourite on this trip was this thuggish Peppa Pig amid a load of tags. 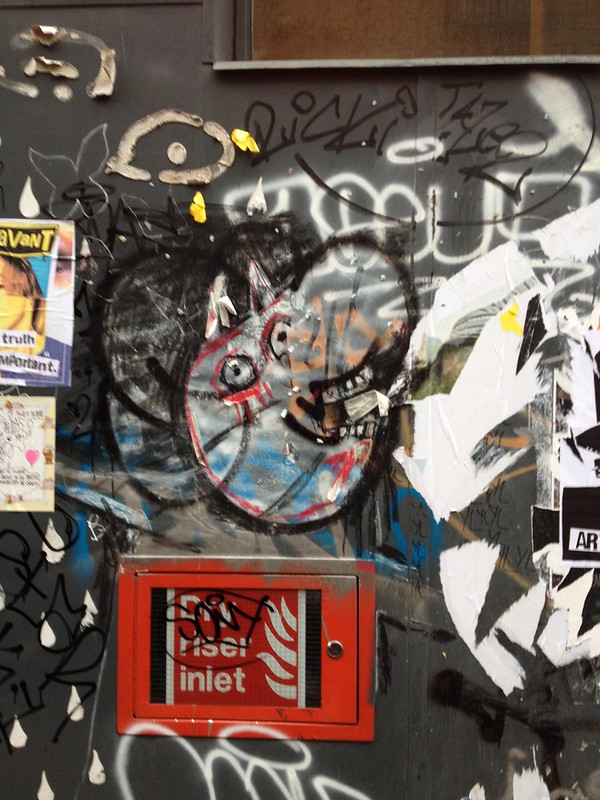 Having had to draw Peppa umpteen times for my ickle niece I admired this artist's work. That's assuming it is Peppa. For all I know it could be a Hipster Icon and Peppa is simply an ironic reworking of it. In which case I need to rewatch the "Muddy Puddles" episode and think in more depth about the subtext.


Posted by littlelixie at 8:31 pm 3 comments: Links to this post