It could all have been so beautiful

June 21, 2020
Let's start with a recap of where things currently stand. I’m still in San Francisco. Pooch and I are no longer together as of April, although at this moment we are still living together. I have an awesome one eyed cat called Charlotte. 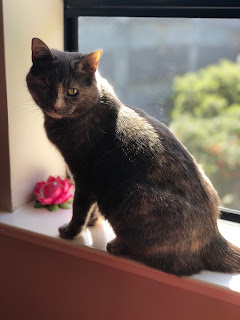 I work for Shopify. I’m still quilting, sewing, knitting, creating and generally making things that look different to how they did before I got involved with the base materials.

After a period of having completely lost my mojo creatively, I’m generally expressing myself artistically in whatever way I feel like in the moment. I suspect it is displacement activity since one thing that hasn't improved since I started this blog is my ability to express and feel my feels. In fact I'd say that it's got a lot worse. The six years I've spent here living with Pooch have not been easy, and the last year in particular had been especially hard. I'm no angel, but when I let my eye drift back over the vista of those years I can see that I've been manipulated and used. Of course, I brought some of it on myself by marrying him again after the first divorce. The fact that I don't feel particularly angry or upset about this split is what I'm currently working on with my therapist, and what I'm trying to express creatively. I was thinking about this earlier and the phrase I've used as the title of this entry is what kept going around in my head.

I signed up for Joe Cunningham's quilt classes when he moved online, and one thing he said in the first class has really stuck with me.


"If I want to communicate with you I'll give you a call. My Art is what I want to express."

So not only am I trying to express myself by feeling my own emotions, but also by expressing myself in a more abstract form.

The class was about interpreting a classic block (in this case an unnamed one of HST flowers in a vase) using Joe's techniques. This is what I ended up with. 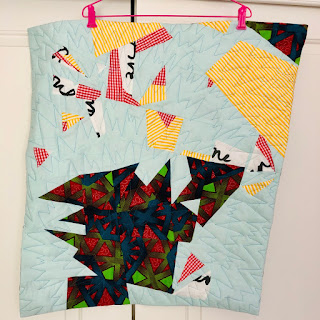 I quilted it as if the "vase" had been shot and was in the act of shattering into shards. I don't like it but I am really pleased with it and have had it hanging up in the bedroom ever since. I finished, quilted, faced and labelled it all in one weekend which was extremely satisfying. His next class is in a few weeks and is about his use of bias tape which promises to be intriguing.

I've been knitting scrappy socks as a mindless exercise to keep my hands occupied. I'm onto my fourth pair, having not knitted any for a few years, and they are starting to pall. I did break out and make this yesterday, using two pieces of english paper piecing I'd had in a drawer for years. 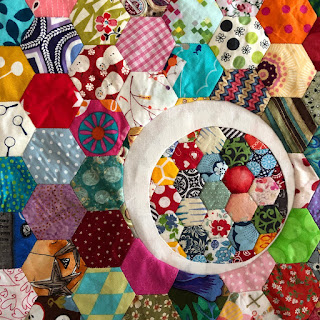 1" and 1/3" hexagons. I inset the smaller ones using the 6 minute circle method which is amazingly effective, although definitely not 6 minutes for me. This is the May block for the SF Quilters Guild "lone robin" since with Covid we're not able to meet and exchange blocks. The prompt was to use a circle. The June prompt is to add flying geese although my first attempt was aborted this morning. I have a back up plan but the first looked too crazy even for me. I do like this start, using up orphan blocks and elements left over from old experiments or projects. The Guild's online meetings are currently free and July will be a trunk show of rare and historic quilts on July 21st. More details are online.

The next step in the dissolution of my marriage is to find a new place to live. I have one option with an awesome friend but there would be a clash of cats. I'd love to find a 1 bedroom apartment of my own and am open to anywhere in the SF/Oakland/Berkeley area as long as it's got some sort of public transport. My dream, and what could have been so beautiful, was to have a little house with a garden. I thought we were there last Autumn until I got played on that too. That was really the end of the beginning of the end and made it a definite thing. So for now I'd settle for a tree just outside so Charlotte can watch the birds from the windowsill.

ShinyNewThing said…
nice to see a catchup on what you've been up to, sorry to hear about the relationship breakdown. Hope you find a nice place to live!
5:19 am

Popular posts from this blog


This is perfect for someone who wants to try something a bit different  to basic blocks. You assemble the fans or plates and then applique them onto the background. The finished quilt is approx 36"x44".

I used the V&Co Ombre Confetti Metallic range which I fell in love with as soon as I saw it. The confetti dots made me think of bubbles, champagne, lemonade, blowing on dandelion seeds and summer. The full range is discussed here. It can be bought from a variety of retailers. I purchased mine from SoJo Fabric (⅛ yd cuts) and The Heart & Home Co (backing), both on Etsy, but buy local and support your local stores where you can. For the petals I used Magenta, Plum, Aubergine, Indigo, Turquoise, Lagoon, Lime, Honey, Coral, and Persimmon. The centers were Sand and Mustard. The background is Popsicle Pink. My backing and binding is Kona Cotton in Honeydew. I was originally going to use the Honeydew as my background but it …
31 comments
Read more

If #ifttt magic works, this should post to my blog Lixie Makes It. #instablog

Be a Hexie Queen! And a Giveaway!

August 22, 2013
My day on the bloghop! Thanks to everyone involved and don't forget to look at the blogs of the others involved today.

I left it rather to the last minute to make something for this - relying on my ever present box of hexagons which I add to when I don;t feel like sewing or knitting anything requiring concentration.
But then at the start of this week I realised inspiration had not struck. What to do?!

I am destashing a lot at the moment and came across some 1/3" hexagons I'd been making for a miniature quilt to enter at this year's Festival of Quilts. Er, yeah, the one I blogged about a few weeks ago with the entry deadline in May. Not one to waste all that work...meet Wonky the mouse.
I am not a big toy maker but when I saw this on Pinterest I thought it might be fun to make.

I thought I'd followed the pattern exactly but he came out very bulgy so I trimmed and resewed and went a bit freestyle...hence his being named Wonky. But what the hell - he looks better fro…
81 comments
Read more