Finished Objects Abound and Knitting Too

It is *so* good to have a sewing machine and space for fabric again. I have been using the one shoulder bag for 10 weeks now so I whipped up a new one this week. 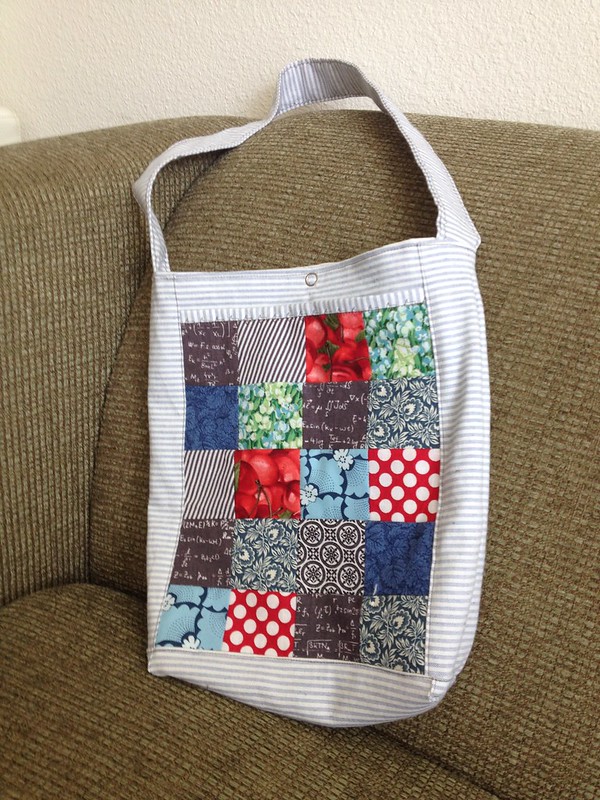 I even used one of the new stitches on my sewing machine - an arrow - on the pocket flap. 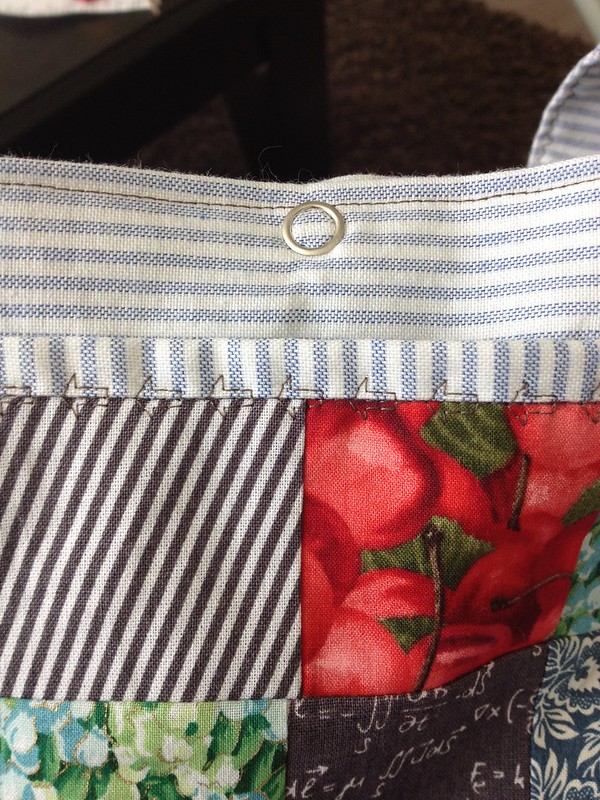 The sewing machine itself (a Singer 7258) is rather noisy and not as smooth as my pre-Tokyo Brother but we are getting on very well nonetheless. The main fabric and several of the squares are from what I found at Scrap when I visited last week. I also used that for this little notebook cover using 1/2 inch hexagons. 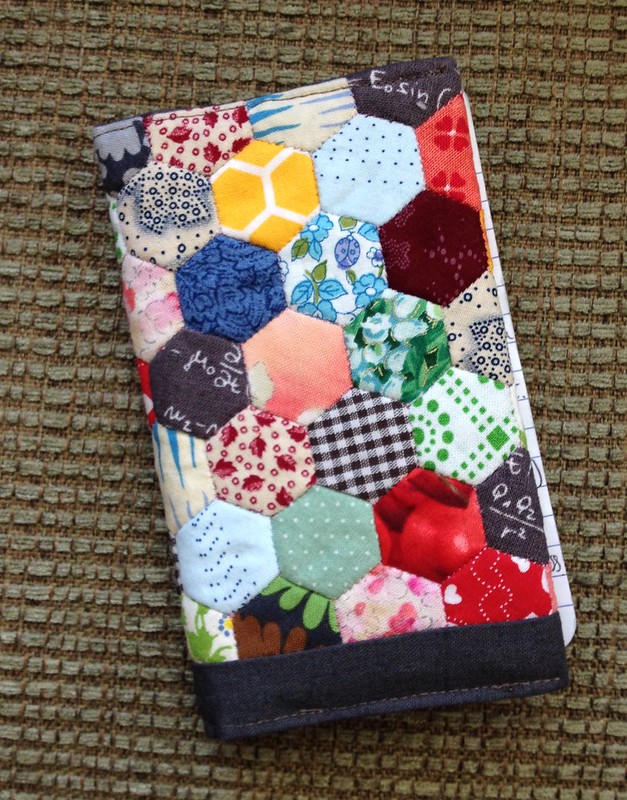 I learnt from my previous notebook cover that the flaps need to be as wide as possible to stop the covers falling out. 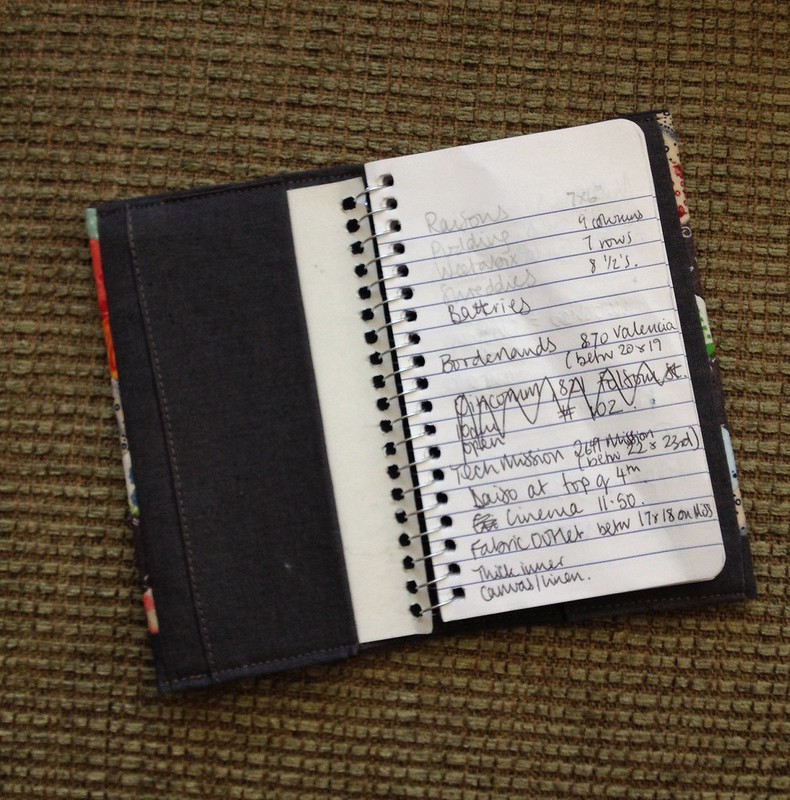 All important shopping list and cafe/shop destinations noted there.

I was making many notes at the second knitting group I attended this week which was in the Haight. I don't know why but I always thought the T on the end was silent, but it's not. 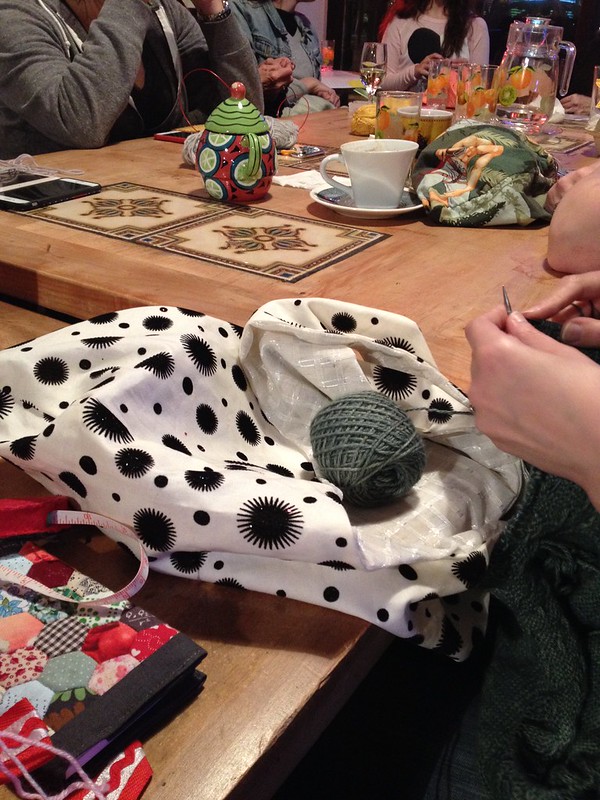 The people there were really friendly and one of them is even a WWE fan! It was so cool to have a conversation about wrestling with someone other than myself! I also gave my ridiculously girly knitting an airing. 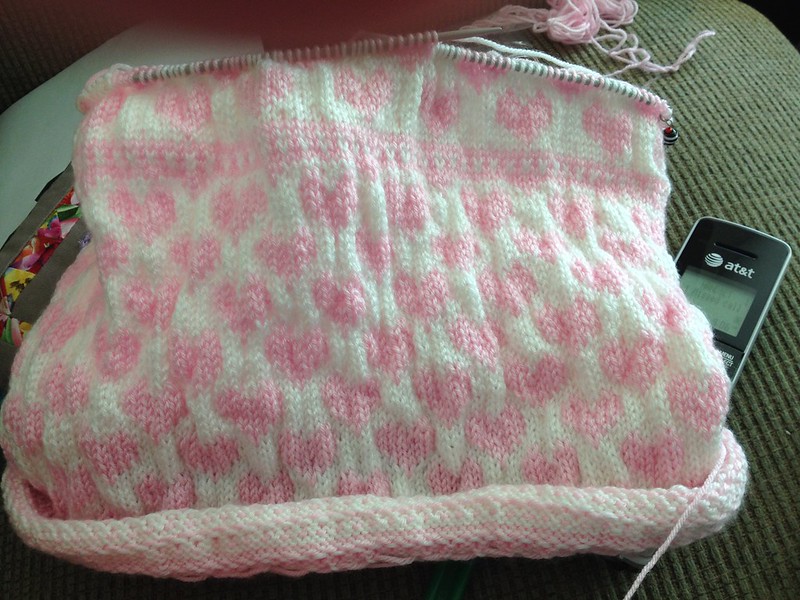 Isn't it obscene? The UK Knitting and Crochet Guild have an online challenge to knit something for a baby in March so I decided on something I would never normally knit and set out to make the most girly thing possible. It is using this free Drops pattern but I've changed the chart to reduce the long carries of yarn behind and I'm only using two colours.

Last night we went out for dinner with some friends and I wore my penultimate finished object of this post - the Crazy Stripes Tee. 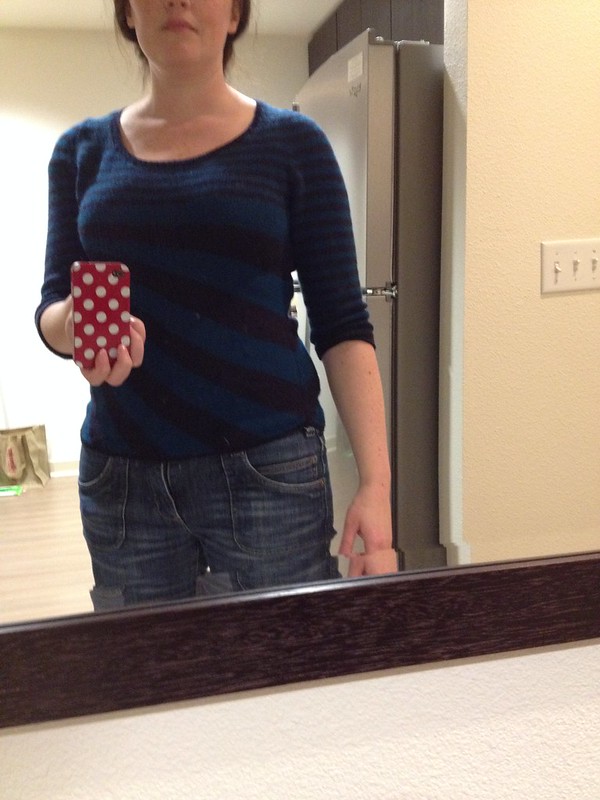 I could not be any happier with the fit of this. The length is perfect, the negative ease is elegant without being nasty, the overall fit is great. The pattern was excellently written too in a large range of sizes - I can see myself knitting this again in different colours.

And then finally, I have started making a set of coasters, of which two are finished. 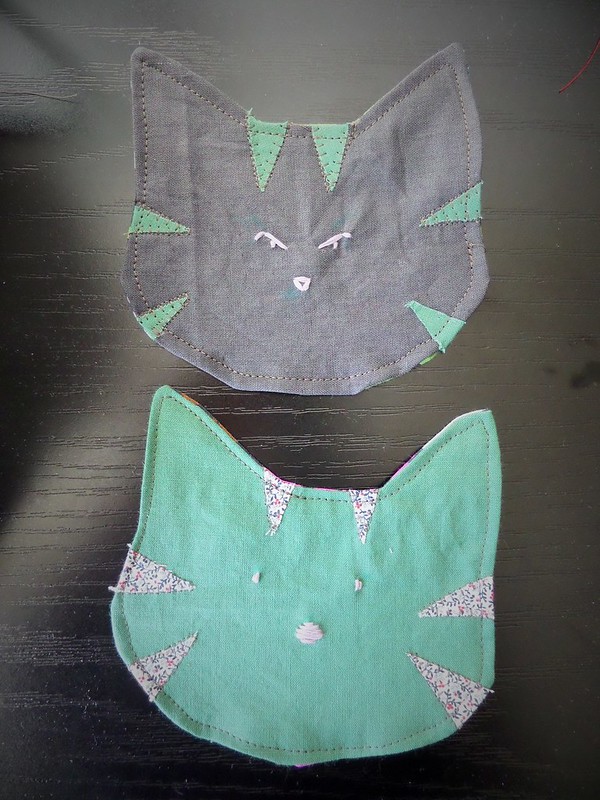 These are inspired entirely by Pins on Pinterest and also gave me the chance to try my sewing machine's blanket stitch function, which is very handy for raw edge appliqué. I only used it on the cat's stripes but it worked well so that opens up another avenue of sewing to be explored.

When we moved here Pooch told me the names of some neighbourhoods I should avoid. Naturally I listened carefully and instantly forgot these because I am second only to goldfish when it comes to memory and lack thereof. It turns out, hilariously, that the moment I was left on my own, once Pooch had started work, I travelled straight to one of these, called the delightful sounding "Bayview". Bayview is where you end up if you travel due South from our flat, through the neighbourhood of Dogpatch (not making these names up), and on further. The place I was actually aiming for was called "Scrap - a source for the resourceful" and is between Bayview and Bernal Heights - the latter being ok to go to during the day but not so much after dark.

To cut a long story short, no one died and I duly arrived at Scrap. 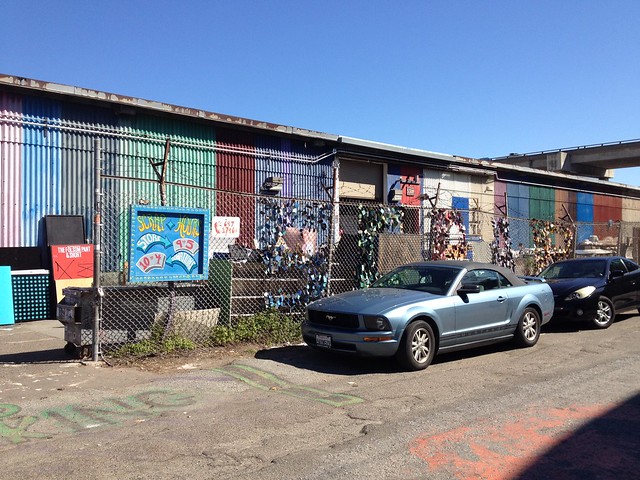 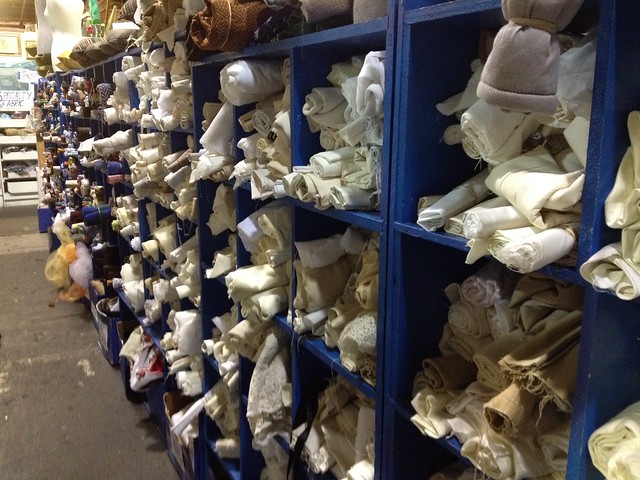 I'd been to two UK scrap stores and they were fun but...meh. This one was a crafter's paradise - regardless of the craft but especially for fabric users. The guy at the till actually thanked me for taking a huge bag of fabric and assured me they never ran out so I should come back again soon. 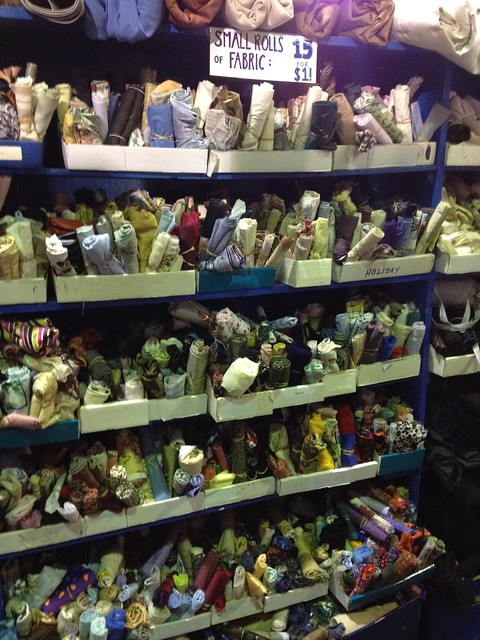 See the sign at the top? "Small rolls, 15 for $1". Ha. I'm not going to say it's worth the risk of being shot because that would be flippant. It is pretty awesome though. Plus there were books and patterns. 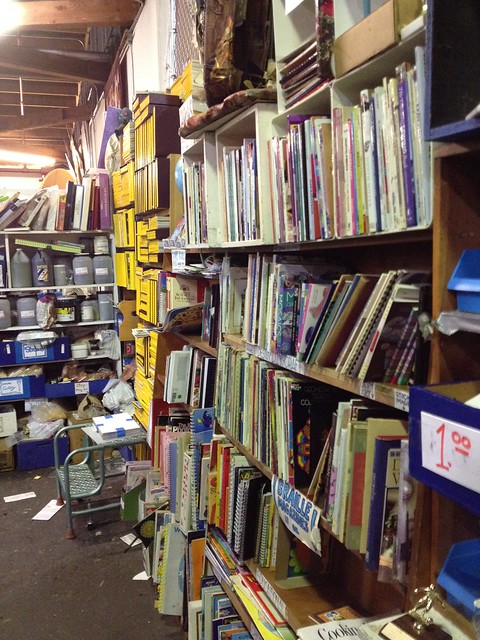 Endless amounts of everything - including used and virgin cine film, slides, offcuts of every wood, plastic, metal you can name, frames, paints, glass...just everything. 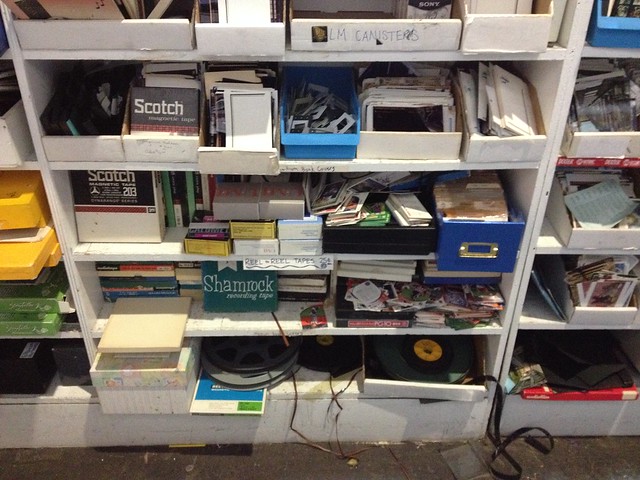 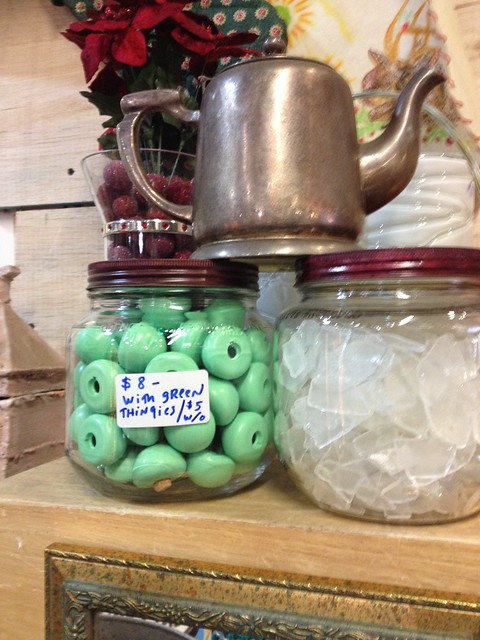 What are the green thingies? I have no idea. Who cares. The only thing I couldn't see was knitting yarn. The reason for this was apparent at check out. 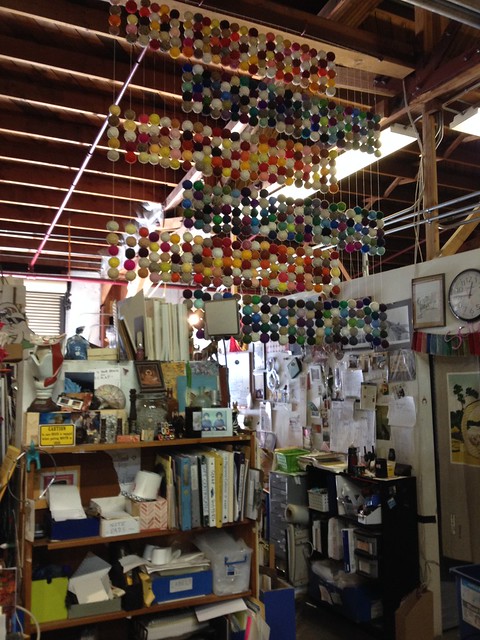 Looks good though. When I got there the man asked me if $8 would be all right for my shopping basket full. A lot of the fabric there would be more than that for 50cm. I insisted on $10. My fabric haul... 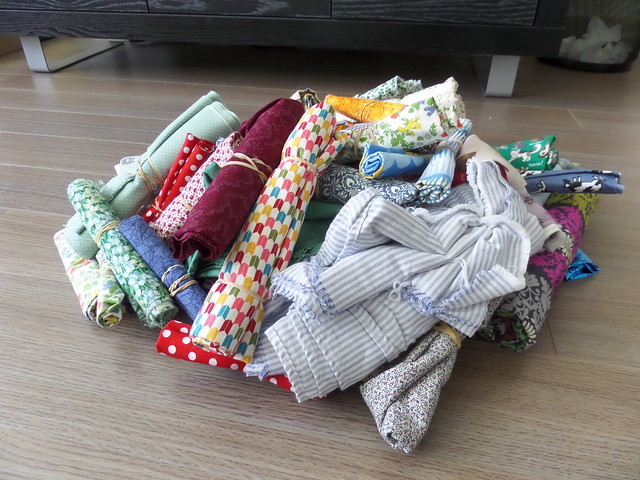 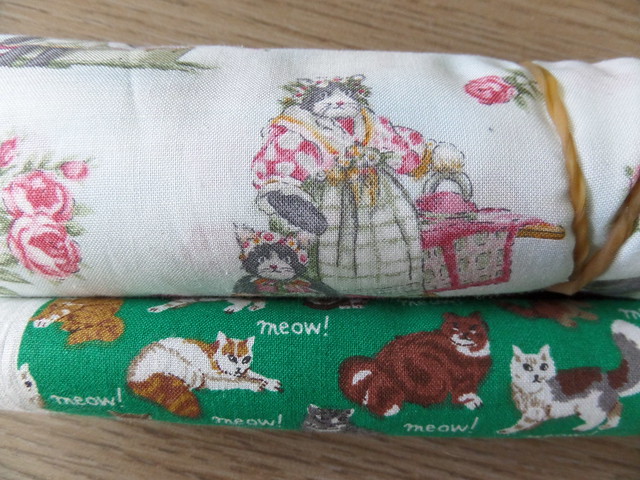 A vintage pattern for a dress I had and used to wear all the time when I was 19ish (the red model but full length). 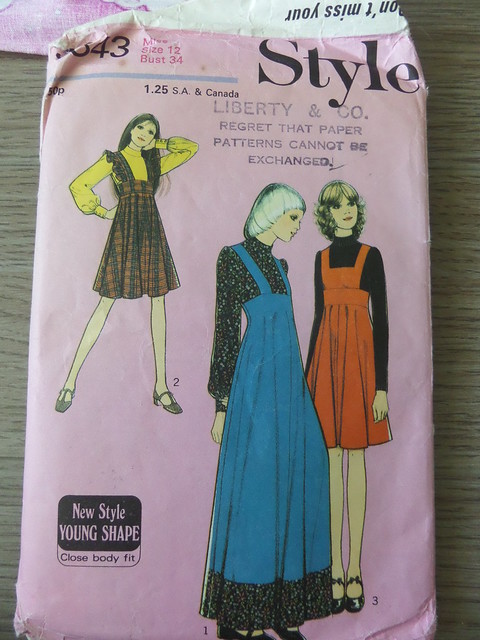 Plus a few vintage pattern books for a certain friend I'll be seeing on a certain knitting holiday in a month's time.

My new sewing machine - a Singer - arrived yesterday so I have used the fabric to cut out some coasters. I thought they would be a good small project to try out the machine on. I will report back on progress!


Posted by littlelixie at 2:14 am 3 comments: Links to this post

In Physics there is a symbol called "plus minus" (not anything greek or nothing) that looks like this:

When I was doing my degree I would use it daily - or maybe even hourly. In later life maybe not so much but probably still a few times a month. It is very handy to indicate a margin of error or, in other words, how wild an estimate you are making. In some ways it isn't suitable for this post because my Mum did definitely lose her cat this week. 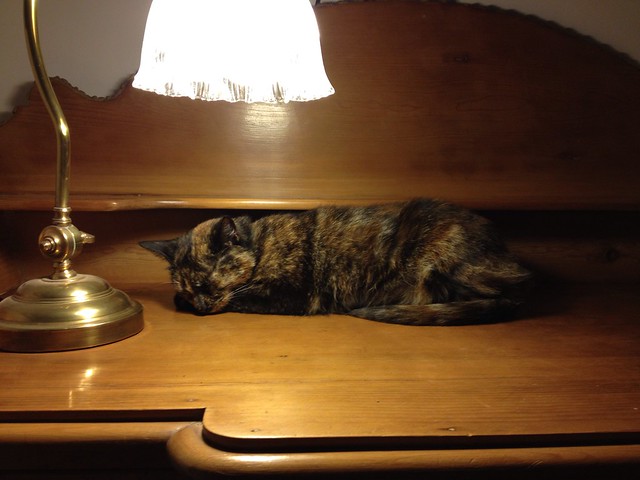 Poor little Artemis (Arty for short) developed a flea allergy about two years ago and had to go onto steroids. The weight gain they caused may have robbed her of her svelt figure but she was still a champion hunter and was leaving impressively large entrails on my Mum's doorstep right up until a few days before she died. She used to love sleeping with her paw over her nose. 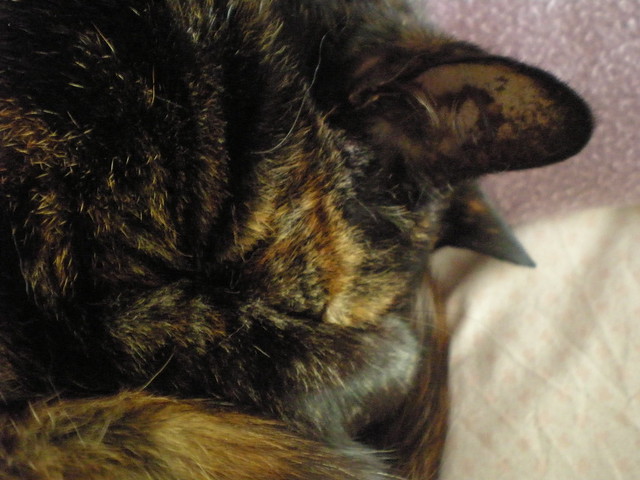 And she had terrible balance and could only get down out of trees if someone stood underneath and caught her. 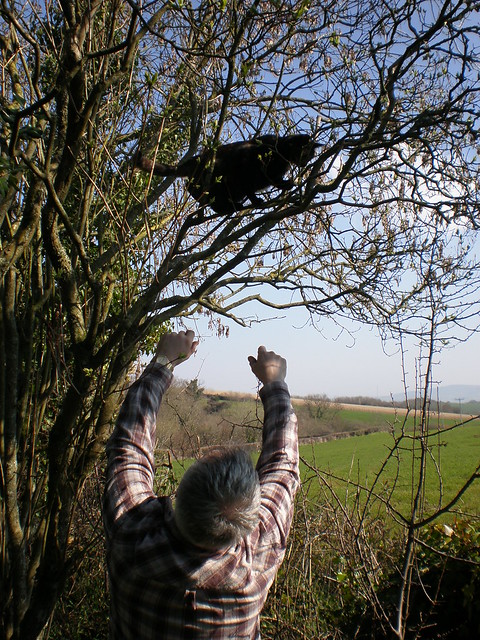 On my farewell visit before coming to America I spent a lot of time with her on my lap with her doing this kind of inward snore, outward purr breathing while I stroked her soft fur. I'm really glad I did that.

The morning I got my Mum's email was the same morning I had booked my first visit to the Cat Town Cafe in Oakland. Oakland is where you end up if you follow the the Bay Bridge (not the Golden Gate one) out of San Francisco. Traditionally it has had a fairly rough reputation with lots of race violence and shootings but parts of it are now Shoreditch-esque in there inclusion of vegan coffee and bicycle shops. It is not like the previous cat cafes I had visited as all the cats there are up for adoption so some are only at the cafe a matter of days before they go to a new home. The cafe has rehoused more than 135 cats since October last year which is pretty phenomenal and one was being fostered while I was there. 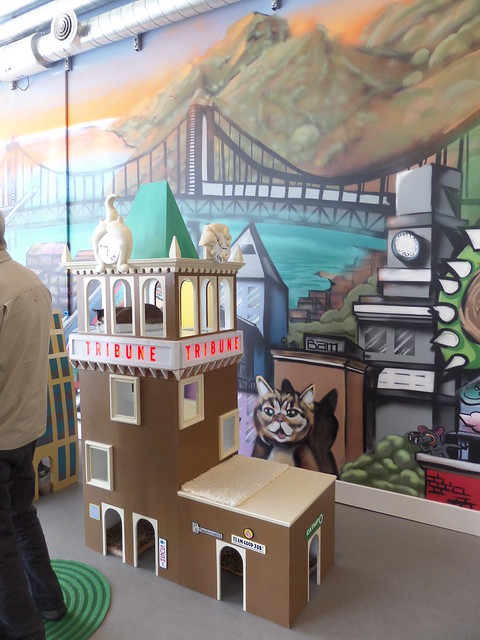 The whole place is very clean and light with lots of places for the cats to sit or play. All the cat furniture represents aspects of Oakland or San Francisco. 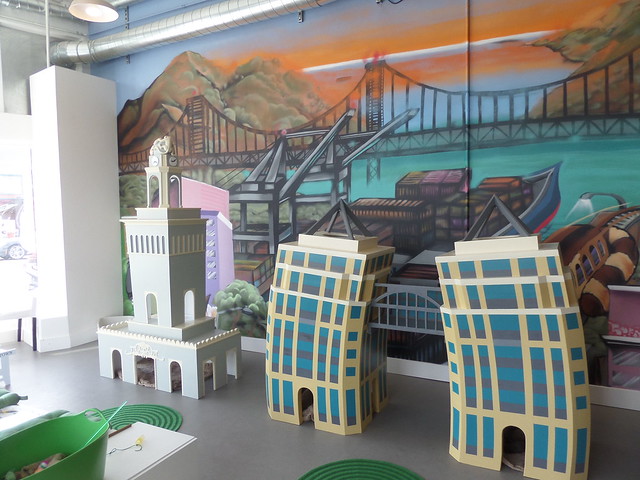 This *beautiful* one was sleeping at the top of the Tribune Building. 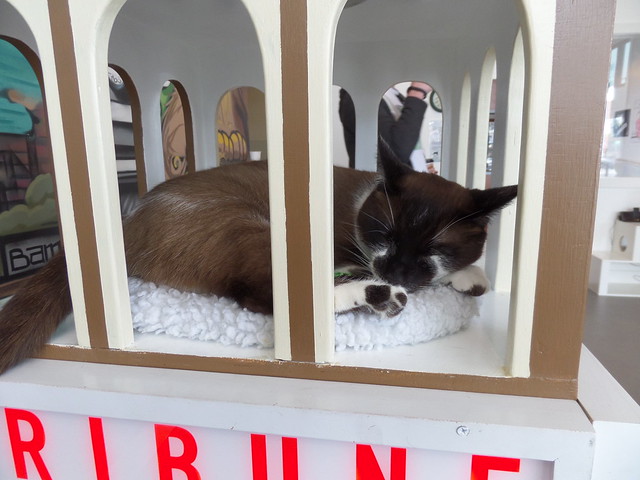 While in another "Quiet Area" (max two people at a time and no toys) there was a little house. 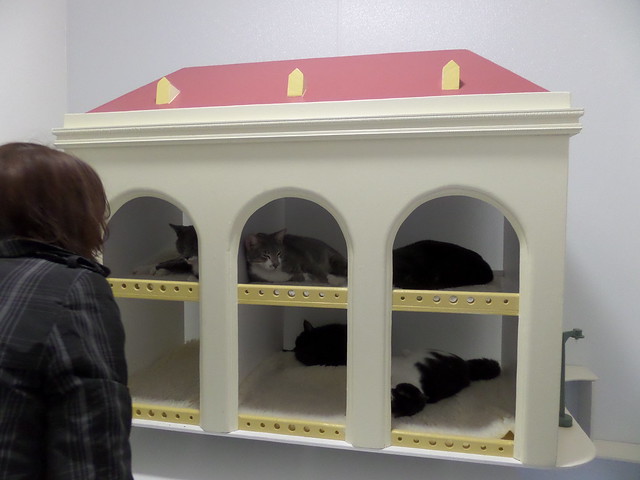 Underneath this was a very quiet area where the cats could go if they were nervous. The ginger boy below had just got back from a patrol of the main room but the long-haired back one, called Mason (should have been 'Mow-son') was quite jumpy. 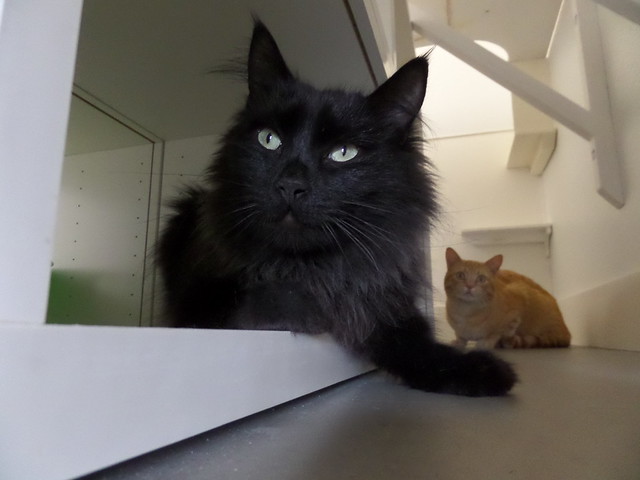 He loved being stroked though and completely stole my heart. Having just lost Arty and knowing that Mason didn't have a home with people who loved him made me pretty emotional. It was hard to say goodbye. I have mentioned him to Pooch but until we have sorted out some proper housing it's not really viable. Not really. Certainly not ideal. Probably not for the best. Not for the best. For the best. The best. The best thing that could ever happen.

Poor little Arty. She was a rescue cat herself. She was such a quirky little thing but so adorable.


Posted by littlelixie at 2:06 am 3 comments: Links to this post